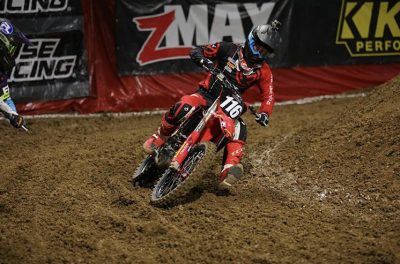 Isaac Teasdale, a member of the Eastern Band of Cherokee Indians from the Snowbird Community, will be racing motocross for the Phoenix Honda Racing Team. (Photo contributed)

Isaac Teasdale, a member of the Eastern Band of Cherokee Indians from the Snowbird Community, will be racing motocross for the Phoenix Honda Racing Team.  The team is based in the Charlotte area, and Teasdale will be competing at the highest levels of the sport in the Kicker Arenacross series, the 250 East series of Monster Energy Supercross, and the Lucas Oil Pro-Motocross Nationals. All three series are televised national events, where the best riders from around the world come to compete.

Teasdale said he is very grateful for the support of those that have helped him get to this level, and there are a number of national and global brands that he is in partnership with, including: Pirelli, Moose Racing, Leatt, TCX Boots, Honda, Bell Helmets, Rockford Fosgate, and others.

“I am especially grateful for the support of the Eastern Band of Cherokee Indians, and I am representing the Visit Cherokee NC initiative nationwide,” he said.  “The list of people in our area that have been involved with, and supported, me over the years is too long to mention, but I would especially like to thank Principal Chief Sneed, Vice Chief Ensley, Chairman Wachacha and the Tribal Council, the Snowbird Community, The Master’s Mission, Jerry and Revonda Williams, CJ Welch, Brandon and Paige Jones, and Brandon Lovin for their support. I would also like to thank my grandparents, David and Sharon Crowe, and Paul and Betty Lou Teasdale, my parents, and particularly, my brother and sister for patiently going all over the country to support me.”

Teasdale added, “I would appreciate your prayers, that I will continue to represent my sponsors well, that God would watch over me, but most importantly, that I will represent Christ well, and bring Glory to Him!”