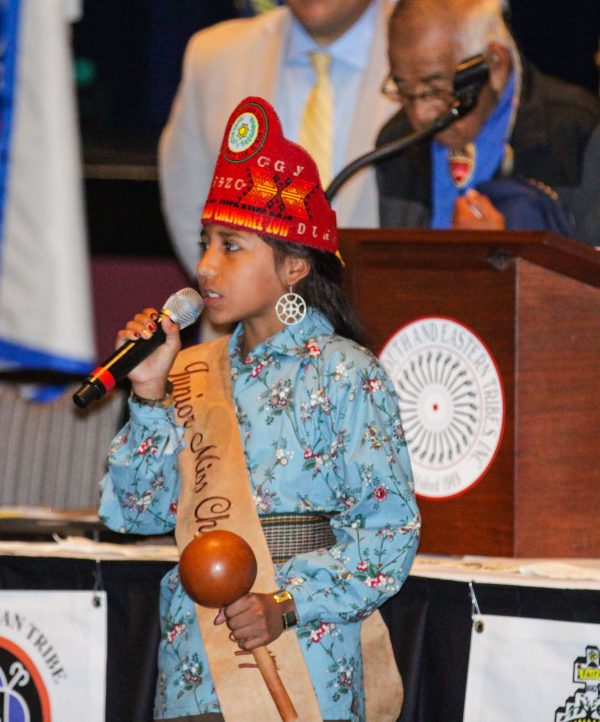 “We’re really grateful to have this opportunity to be here,” said Kirk Francis Sr., Chief of the Penobscot Indian Nation of Maine who also serves as USET president.  “We appreciate you all for welcoming us to your territory and allowing us to be here and to speak on these very important issues.  On a day that’s celebrated by most Americans, it reminds us that the issues we face and the work we do is so important, and I look forward to doing that work this week based on that true history.”

The meeting was hosted by the Eastern Band of Cherokee Indians.  “It’s always nice to welcome back our friends to our community, and especially great to meet new friends who have come for the USET Sovereignty Protection Fund Annual Meeting,” said Principal Chief Richard G. Sneed.  “For many years, our Tribe has joined with all of yours to work toward a brighter future for all of our people and to address the many challenges that we face and to create model communities which are outstanding in all of Indian Country.  I don’t believe there has ever been a time when it’s more imperative that federally-recognized tribes unite and collaborate for the greater good of all of Indian Country.”

He added, “In our time, tribes now have the resources to act on, and I think more importantly, to act as sovereign.  In a time of shrinking federal budgets and greater competition for grants, federally-recognized tribes stand united to ensure the future success of all of our tribes.  The USET tribes have led the way toward influencing policy for decades now; opening doors for our youth and working together as a tribal consortium to effect change.” 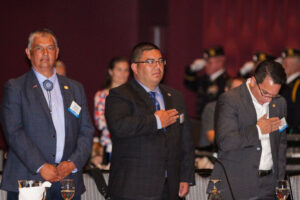 Chief Sneed said USET-member tribes and leaders have worked hard to keep issues at the forefront of legislator’s minds in Washington, DC.  “This is a long tradition of this esteemed organization and one which I hope to continue with all of you.”

One of those legislators was in attendance at the meeting.  Congressman Mark Meadows (R-NC) addressed the USET leaders and spoke of his dedication to the sovereign rights of federally-recognized tribes.  “I’m always very cognizant of the fact that whenever I come to Cherokee, I’m actually entering into a sovereign nation, and that was one of the things that not only the Tribal Council and the Chief reminds me of, but it’s also one that we must be diligent to be ever-vigilant in protecting that sovereign nation and that status.  It is uniquely yours and truly a heritage and a culture that we must preserve.”

Rep. Meadows said attacks to sovereignty are coming from everywhere.  “Whenever you have a new administration and you have changes, it brings uncertainty.  But, one thing is certainly true is our relationship, and it is my hope for many of you that you have the same kind of relationship with your members of Congress and Senators.”

He noted that the flag of the Eastern Band of Cherokee Indians is posted outside the door of his office every day and has been there every day he’s been in office.  “It’s a constant reminder that not only am I a representative of the people of this great country that we are fortunate to call home in the United States, but that I have a special relationship with those in the Eastern Band of Cherokee Indians.”

Other governmental officials were present including Will Miller who serves as Deputy Secretary of the North Carolina Department of Commerce.  “We’re blessed in North Carolina to have low unemployment…now, our job is to help people do better; better jobs, more money in their pockets.  That’s what we’re trying to do.  So, to the extent that we can help you in the State of North Carolina, please call on us.  We have a lot of programs on small business.  You do a great job with that around here, and we’re happy to help in any way that we can.”

During the beginning of the USET Board meeting, a new tribal nation was added officially to the USET organization.  The Pamunkey Indian Tribe of Virginia, a small tribe numbering around 200 members, received federal recognition last year.

Robert Gray, Chief of the Pamunkey, thanked the USET members for allowing his tribe into the organization.  “For those of you who don’t know, the Pamunkey Tribe is from the eastern side of Virginia.  We’re the tribe of Powhatan and Pocahantas, the real ones, not the Disney versions.  We’ve been on our ancestral lands since the 17th Century.”

He said his tribe started looking at federal recognition in the late 20th Century.  “That was a long process.  Many of the other tribes here know that as well.  And, I’m just glad that we finally achieved recognition and we’re just moving on.  We’re trying to figure our way out and just how it all works, and we look forward to working with USET and all the various Chiefs and all the tribes for our own well-being and also to help USET in any way possible.”

A special honoring was held for the late Howard E. Tommie, former Chairman of the Seminole Tribe of Florida who was often referred to as “Mr. Self-Determination”.  A veteran of the U.S. Army, Tommie’s memory was honored, with his family present, with a presentation led by Sam Lambert, an EBCI tribal member who serves as the chairman of the USET Veterans Committee.

Lambert noted, “We are here this morning to honor a truly remarkable man; a man who not only served his country, but as so many of our veterans in Indian Country do, they not only serve in the service of their country, they come back and they serve their tribes.” 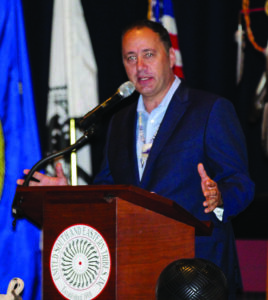 LEADER: Kirk Francis Sr., Chief of the Penobscot Indian Nation of Maine who also serves as USET president, speaks during the opening ceremonies.

Former Tribal Council Chairman Bill Taylor read a letter from his father, former Principal Chief Ed Taylor, who worked with Tommie in the early days of the USET organization when tribal leaders worked diligently to garner funding for their tribes.  “It was hard for tribes to maintain funding from the federal government in those days.  So, myself, Howard Tommie, Phillip Martin, and Buffalo Tiger worked hard on Capitol Hill to make sure we got funds that was owed to our tribes.  We and Howard served together on USET as officers and worked together within our own tribal governments.”

The letter continued, “Through our working together and traveling, we became good friends.  Many times, through our friendship, we requested help from each other within our own tribes.  I will say Howard Tommie was a great leader and a wonderful friend.  He spent his adult life working for his tribe, and he loved his people.”