Tribe to receive 35 acres near Kituwah in settlement 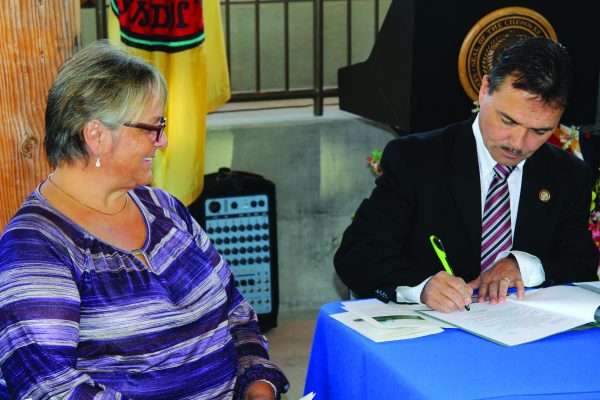 With Big Cove Rep. Teresa McCoy looking on, Principal Chief Patrick Lambert signs a settlement agreement between the Eastern Band of Cherokee Indians and Duke Energy that ends a claim over a 2009 fire in the Big Cove Community. The agreement was signed on Thursday, Sept. 29 at The Gathering Place located at Cherokee Central Schools. (SCOTT MCKIE B.P./One Feather)

A faulty power pole caused a fire in the Big Cove Community on April 27, 2009 that burned for a week.  That fire, which damaged a total of 2,300 acres, has resulted in a settlement between the Eastern Band of Cherokee Indians and Duke Energy.

The Tribe received a check for $1.7 million in the settlement, but more importantly to tribal members and leaders, Duke Energy has given the Tribe a 35-acre tract of land adjacent to Kituwah.  According to the Department of Justice, of the $1.7 million, a total of $1,210,128 will be paid to the Tribe for compensation for damages to the tribal forest with the remaining $489,872 going to federal agencies and the Cherokee Fire Department for “suppression, enforcement, and rehabilitation costs” associated with the fire.

“Today, we are here to help restore balance that was lost in a fire that burned over 2,300 acres in the Big Cove Community,” said Principal Chief Patrick Lambert at an event celebrating the settlement held at The Gathering Place at Cherokee Central Schools on Thursday, Sept. 29.  He then thanked the U.S. Attorney’s Office and the EBCI Office of the Attorney General, especially Hannah Smith, for their work on the litigation that resulted in the settlement.  “It shows the good faith and working relationship that we have with each other.  I’m highly respectful and appreciative…”

Chief Lambert told the crowd at Thursday’s event that he received a call from David Fountain, North Carolina president of Duke Energy, the night before.   “He expressed his regret at not being able to be present with us today, but he wanted to speak about how proud he is for this settlement and how he believes, as I do, that this has turned into and created a most friendly relationship between ourselves and Duke Energy.  So, I truly appreciate his efforts and his ability to work through this process.”

In an incident unrelated to the 2009 fire, Duke Energy and the Tribe had a disagreement six years ago as the company began work at putting in a new electric tie substation at the property located just above Kituwah.  After many meetings and consultations, Duke Energy agreed in August 2010 to re-locate their substation.

On Thursday, that same plot of land was transferred to the Tribe.

Chief Lambert commented, “To their credit, they agreed, at that time (2010), to recognize the importance and the cultural significance and they moved that substation.  And now, through this settlement, they have agreed to give that 35 acres to the Tribe.”

Shawn Crowe, an EBCI tribal member who served as emcee for Thursday’s event, related, “Sometimes in tragedy, there is light.  There is hope.  There is good, and today we saw something good for the Eastern Band of the Cherokee.  Money always goes away.  We can lose money in a second, but land that is significant to the Eastern Band of the Cherokee and Duke’s willingness to give us back that land, ladies and gentlemen, that is a significant event in our people’s history.”

Big Cove Rep. Teresa McCoy said Thursday was “an absolutely historical event” for the Tribe.  She praised the resilience of those in the Big Cove Community and also praised the initial efforts of then-Big Cove Rep. Perry Shell who she said started the discussions that led to the settlement.

Big Cove Rep. Richard French commented, “We stick together.  When a tragedy hits, this community comes together.  As you see, we do this as a Tribe.”

He added, “If it’s wrong, we’re going to fight until it’s made right, and that’s what we’re about.  We’re a proud nation, and we want people to see that.  We’re here to help any way we can, but we also won’t stand back and let something happen to us and us not fight for our people…this is a great day for our Tribe.  This is a great day for the Big Cove Community.”

Corey Ellis, assistant U.S. Attorney, explained that Thursday’s event was refreshing and gave all a chance to focus on a positive.  “There are so many opportunities to dwell on the negative in my line of work that I’m appreciative of Principal Chief Lambert and the other representatives here for taking time out to stop for a moment to dwell on a positive that came from a negative.”

Of the land gift from Duke Energy, he related, “There is a solemn responsibility and duty to care for and protect all of Kituwah and to preserve the integrity of this important site that was the origination and the continuation of Cherokee culture…the symbolic significance of this is fundamental, and I’m happy to be a part of it.”

Mike Hughes, Duke Energy vice president of community relations, said, “Over many decades, we have enjoyed a very positive relationship with the Eastern Band of the Cherokee.  In the 1940s, when Nantahala Power was starting to bring power to this region, it was absolutely vital that they had help from the Big Cove Community…the men from the Big Cove Community literally dug holes for the first poles that brought electricity to this region.  Since then, we’ve worked together constructively to power the growth in this region.”

He went on to say, “As with all relationships, it’s not without its challenges from time-to-time, but as today’s event indicates, we share a commitment to working together toward equitable solutions.”

During the event, various emergency agencies were recognized for their help in fighting the fire back in 2009 including the Cherokee Fire Department, BIA Cherokee Agency Fire Division, National Park Service Fire Department, U.S. Forest Service, and the U.S. Fish and Wildlife Service firefighters.

To view or purchase photos from this event, visit: https://onefeather.smugmug.com/COMMUNITY-and-NEWS-EVENTS/2016-Community-and-News-Events/Tribe-Duke-settlement-signing/i-mg3R3wH