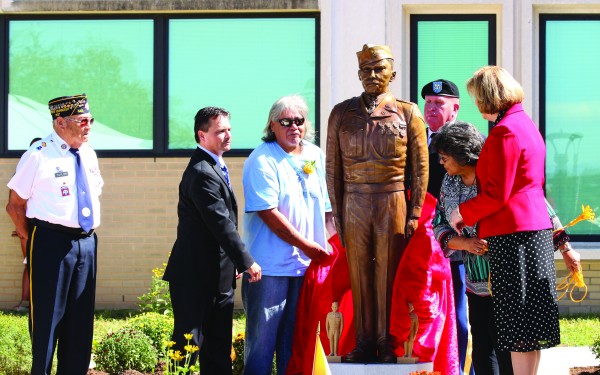 ASHEVILLE – James Spratt had a dream to sculpt an American hero.  He fulfilled his dream.  Spratt, a U.S. Navy veteran and long-time patient at the Charles George VA Medical Center (CGVAMC), was the sculptor on a project to immortalize PFC Charles George, an EBCI tribal member and Medal of Honor Recipient.

That project came to fruition as the life-size statue of PFC George was unveiled at the Center named in his honor on Saturday, Sept. 24 – sadly, the same day that Spratt passed away after a long, courageous fight with cancer.

“What a privilege is it to honor a true American hero in such a memorable way,” said Cynthia Breyfogle, CGVAMC director.  “I was both thrilled and humbled when I first heard that we would receive this statue.  The legacy of Charles George was, and still is, an inspiration and influence beyond his local community.  His courage and example join those of other brave men and women, past and present, who have answered the call when their country needed them.”

PFC George, one of only 28 American Indians to receive the Medal of Honor, threw himself on an enemy grenade, saving his comrades at the expense of his own life on Nov. 29, 1952 near Songnae-dong, Korea.

Warren Dupree, Steve Youngdeer American Legion Post 143, was a member of the Charles George Memorial Fund Project Committee.  On Saturday, he had the duty of informing the crowd that Spratt had passed away at his hospice care facility moments before the unveiling ceremony was to begin.

Dupree told of Spratt’s vision to create a Charles George statue and told of their journey to get it to fruition.  “He wanted to thank the namesake of this true hero for the wonderful treatment he received while he was here – the kindness, the care…he wanted to thank the Eastern Band of Cherokee Indians and the Charles George Memorial Project Committee for their kindness in helping him make his dream come true.  He wanted to give back, and this was his way of paying back to the veterans of the United States Armed Forces and the staff and members of this facility.” 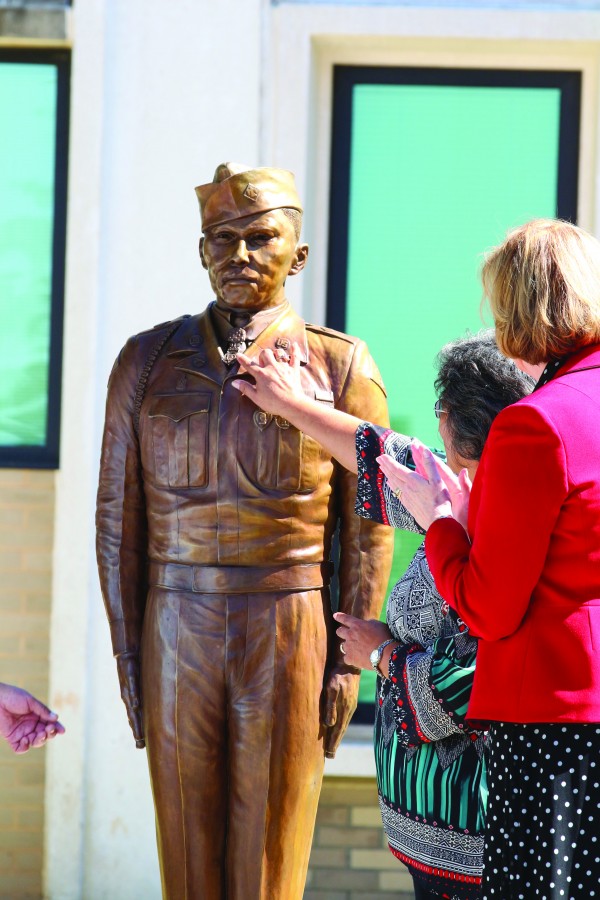 Principal Chief Patrick Lambert spoke during Saturday’s event and praised Spratt for his artistic vision and his heart.  “He created this clay model, his last act of artistry for all the world to behold. James faced his own battles, and even through his sickness, he did this in a selfless and honorable fashion.”

Chief Lambert went on to speak of selflessness and leadership – qualities he said were possessed by both PFC Charles George and Spratt.  “All people in all communities should come to learn what these values mean and also strive to practice these traits that these two men, Mr. James Spratt and Mr. Charles George, have so clearly demonstrated.”

He added, “Being brave isn’t hard.  It’s about doing the right thing at the right time regardless of the consequences, and that’s exactly what Charles George did.  Because with every choice, there is a consequence, and when the choice was made by Charles George, he inspired many, including me, to fulfill the values he exhibited of love, hope, and duty.  He is a great hero.”

Director Breyfogle was joined in unveiling the statue by Chief Lambert and several members of PFC George’s family including his niece, Patty Buchanan, and his nephew, Kevin George.

In honor of PFC George and the pride he held in his Cherokee heritage, many EBCI tribal members were featured throughout the program.  Singers from the New Kituwah Academy opened the program with the “Cherokee Morning Song”.  Then, the Steve Youngdeer American Legion Post 143 Color Guard presented the colors for the day after which Miss Cherokee Taran Swimmer sang the “Cherokee National Anthem”.

Members of the Warriors of Anikituwah helped open the program, and then performed an Honor Dance for PFC George immediately following the unveiling.

A second statue has been fired and will be unveiled in Cherokee on Friday, Nov. 11 at the Cherokee Veterans Park adjacent to the Cherokee Tribal Council House.

To view or purchase photos from this event, visit: https://onefeather.smugmug.com/COMMUNITY-and-NEWS-EVENTS/2016-Community-and-News-Events/PFC-Charles-George-Statue/