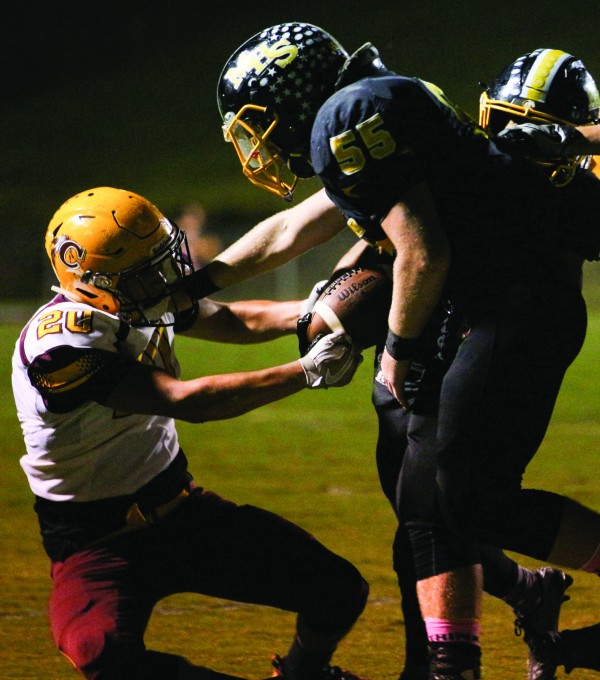 GET ME THAT: Cherokee’s Holden Straughan (#20), Braves junior outside linebacker, strips the ball from a Murphy running back while being blocked by Luke Newton, Bulldogs senior guard. (SCOTT MCKIE B.P./One Feather)

Tye Mintz, Braves junior quarterback, was 1 of 4 passing for 8 yards on the night.  Isaiah Evans led Cherokee on the ground with 13 rushes for 34 yards and 1 touchdown.  Holden Straughan caught 2 passes on the night, including one 12-yard touchdown, for 59 total yards.  Cade Mintz also played in the quarterback position, but stats were unavailable for him at press time.

Murphy’s Joey Curry connected on 8 of 13 passes for 108 yards, and 1 touchdown.  Slade McTaggart led the Bulldogs with 5 rushes, 58 yards and 2 touchdowns.

Straughan led Cherokee defensively with 7 tackles followed by Will Davis 5.  Tye Mintz, Anthony Toineeta, and Damion Blanton had 4 each.

Cherokee got the ball to start this contest. They began at their own 9-yard line, but were held by the Murphy defense and forced to punt after a three-and-out.

The Bulldogs began their first possession on their own 41-yard line. Their 8-play drive culminated in a 1-yard touchdown run by K.J. Allen. Joey Helton’s point-after kick was good and Murphy led the Braves 7-0 with 6:54 left in the first quarter.

Both defenses held strong as each team had to punt on their next possessions.

Cherokee began their third possession on their own 30-yard line and put in five plays. They ended up having to punt the ball away after taking a little over a minute off the clock.

Murphy took over on the Cherokee 43-yard line and were off and running with McTaggart putting in a 26-yard run on first down. Their 4-play drive was topped off with a 2-yard touchdown run by McTaggart.  Helton added the extra point to make it 14-0 Bulldogs with 22 seconds left in the first quarter.

After beginning on their own 20-yard line on their fourth possession, Cherokee took the game into the second quarter, but had to punt after about two minutes and four plays. 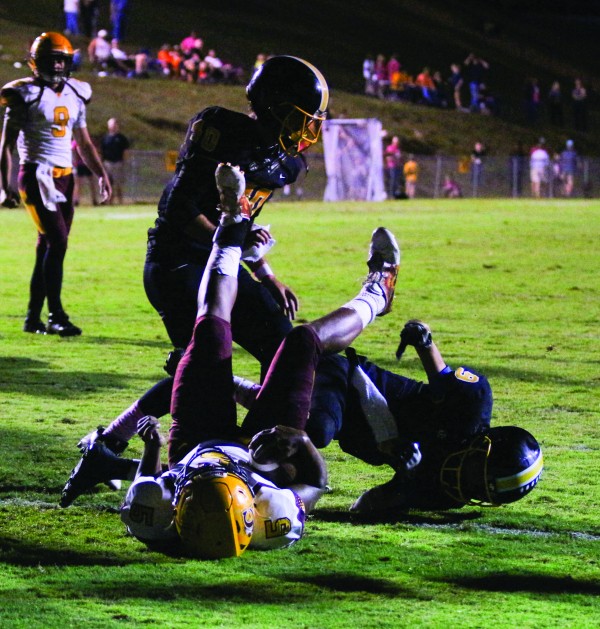 UPSIDE DOWN IS FINE: Cherokee’s Isaiah Evans goes into the end zone upside-down and backwards as he scores on a 4-yard run in the third quarter. (SCOTT MCKIE B.P./One Feather)

Murphy took over on the Cherokee 30-yard line and put together a 4-play drive that ended with Kadrian McRae running the ball in for a touchdown from the 5-yard line. Helton’s point-after kick was good, and the Bulldogs led the Braves 21-0 with 8:43 left in the second quarter.

Cherokee was held to a three-and-out on their fifth possession of the game that began on their own 20 yard line. They punted the ball away and Murphy started out their next possession on the Cherokee 31-yard line. They put another six points on the board after three plays and a 16-yard touchdown run by McTaggart. The point-after kick by Helton was good, leaving the score at 28-0 in favor of the Bulldogs.

Cherokee’s sixth possession took about two minutes off of the clock, but the Braves were held to another three-and-out after starting on their own 20-yard line. They punted the ball back into Murphy territory and forced the Bulldogs to set up shop at the Murphy 23-yard line.

Murphy started their sixth possession with a 27-yard run for a first down by McRae and ended it with a 15-yard pass from Curry to Colton Posey for a touchdown. Helton’s point-after kick was good and the Bulldogs led the Braves 35-0 with 1:26 left in the half – a lead they would take into halftime.

Due to NCHSAA rules, the clock ran continuously due to the score differential in the second half. Murphy got the ball first, beginning at the Braves’ 48-yard line. They put together two quick pass plays and set up a first and goal on the 5-yard line. Cherokee’s defense pushed them back to the 10-yard line, but Ian Davis found a hole and ran the ball in 10 yards for the touchdown. Helton put up another good point-after kick, and the score was 42-0 in favor of the Bulldogs.

Cherokee began their first possession of the second half at their own 33-yard line. Cade Mintz got the 10-play drive going with a 25-yard pass to George Swayney for a first down. A few plays later, with 19.6 seconds left in the third, Evans ran the ball in from four yards out for a touchdown. The point-after kick by Toineeta was good, leaving the score at 42-7 in favor of Murphy.

The Braves have a bye this week and will be at home against the Swain Co. Maroon Devils on Friday, Oct. 7 at 7:30pm.

To view or purchase photos from this game, visit: https://onefeather.smugmug.com/SPORTS/FOOTBALL/BRAVES-FOOTBALL-2016/At-Murphy-September-23/