CULLOWHEE – Leaf-lookers, stay tuned. The quality of the fall colors in Western North Carolina’s mountains this year will depend on the temperatures recorded from September through the typical peak color weeks of October.

That’s the word from Beverly Collins, Western Carolina University’s new fall foliage forecaster. Collins, a professor in WCU’s Department of Biology, is taking over leaf prognostication duties from Kathy Mathews, a biology faculty member who had been evaluating the leaf color potential for 11 years.

Whether it will be a really good year for leaf-looking, or a so-so year, remains to be seen as weather observers monitor the climate to see if the generally warmer-than-normal conditions of 2016 continue through the fall, or if temperatures start dropping and follow the patterns of a “normal” year, Collins said.

The Asheville office of the National Centers for Environmental Information has reported that July was the 15th consecutive record warmest month globally. State climate officials say the monthly average temperatures recorded at the Asheville Regional Airport since mid-February have ranged from slightly above normal to almost seven degrees above normal. 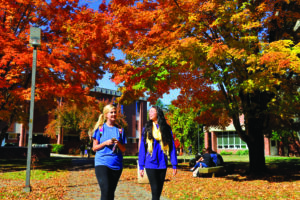 “If our warmer-than-normal weather continues into fall, the colors will be later, more subdued and spottier,” Collins said.

Along with the heat, the summer months brought generally drier than normal conditions to many parts of the mountains, and dry weather in the spring and summer can produce bright fall colors, but only if the fall weather follows its historical and normal trend of increasingly cooler days and colder nights, Collins said. Some long-range forecasters are predicting a cold snap in mid-October, and that would be good for producing colorful leaves, but “we can’t predict October weather in August with 100 percent confidence,” she said.

Each fall, the region’s fall colors emerge as chlorophyll in leaves breaks down, revealing yellow, orange and red pigments that were hidden by the green. Color appears first in the forest understory with the reds of shrubs and vines such as sumac, Virginia creeper and poison ivy. The yellow, orange and red of early-turning trees such as walnut, tulip poplar and maple show up next, and the season ends with the darker reds and browns of oaks, she said.

With elevations in Western North Carolina ranging from around 2,000 feet in the valley towns to more than 6,000 feet on the ridgetops, weather conditions in the region also vary greatly. That factor, combined with the rich diversity of tree species, can lead to a long and diverse color display, Collins said. The best bet for foliage fans is to plan on peak color the weekend of Oct. 15-16 for the highest elevations over 4,000 feet; the weekend of Oct. 22-23 for the middle elevations of 2,500 to 4,000 feet; and the remainder of October for lower elevations, she said.