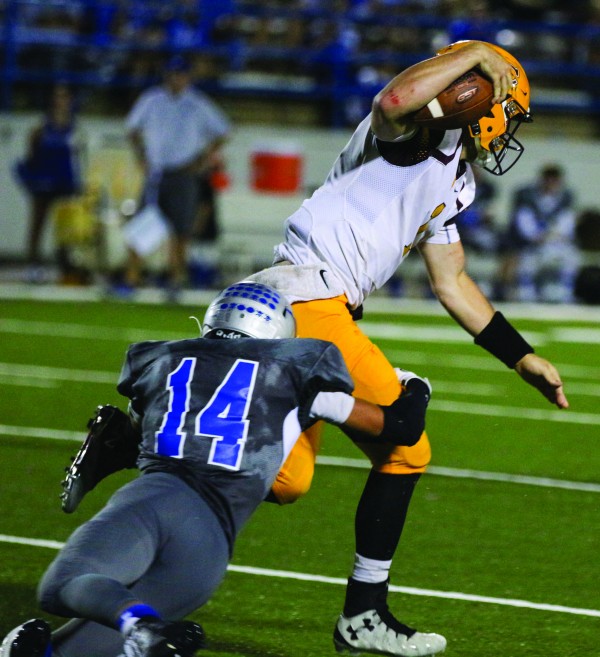 Tye Mintz, Braves junior quarterback, breaks a tackle by Smoky Mountain defender Connor Moore, senior defensive back, en route to a 34-yard gain in the second quarter. For the game, Mintz was 14 of 23 passing for 145 yards, 2 touchdowns, and 2 interceptions. He also led Cherokee on the ground with 8 rushes for 108 yards and 1 touchdown. (SCOTT MCKIE B.P./One Feather photos)

SYLVA – The Cherokee Braves (3-2) shared the spotlight with the Smoky Mountain Mustangs (4-0) as their game at Carr Hooper Stadium in Sylva was featured as WMYA-TV’s game of the week on “Thursday Nights Lights”.  Smoky Mountain remained unbeaten with a 52-18 victory over the Braves on Thursday, Sept. 15.

Tye Mintz, Braves junior quarterback, was 14 of 23 passing for 145 yards, 2 touchdowns, and 2 interceptions.  He also led Cherokee on the ground with 8 rushes for 108 yards and 1 touchdown.  Anthony Toineeta, senior wide receiver, caught 3 passes on the night including two late scores of 22 and 44 yards respectively.

Smoky Mountain’s Cole Hooper connected on 12 of 20 passes for 164 yards, 2 touchdowns and 1 interception.  Matthew Ridley did workhorse duty for the Mustangs with 25 rushes, 101 yards and 2 touchdowns.

Each team was able to move the ball effectively and often.  Smoky Mountain garnered 38 first downs to Cherokee’s 25.

Straughan led Cherokee defensively with 19 tackles followed by Toineeta with 17, Damian Blanton 10, and Joaquin Layno and Dawson Wilnoty with 8.

Smoky Mountain got the ball first in this game and wasted no time in getting on the board.  Five plays into their drive, Austin Baumgarner, senior wide receiver, took a pitch from Hooper and jaunted 10 yards for the score.  Devon Macke, junior kicker, added the extra point and the Mustangs took an early 7-0 lead just over two minutes in.

Both teams ended up turning the ball over on downs on their next possessions.

Cherokee’s second possession, which started at their own 45-yard line, lasted one play.  Tristen Kenyon, Mustangs junior defensive back, intercepted a Tye Mintz pass and returned it to the Smoky Mountain 25.

Two plays later, Hooper connected with Connor Moore, Mustangs senior wide receiver, on a 79-yard touchdown pass.  Macke added the kick and Smoky Mountain was up 14-0 with 5:15 left in the first. 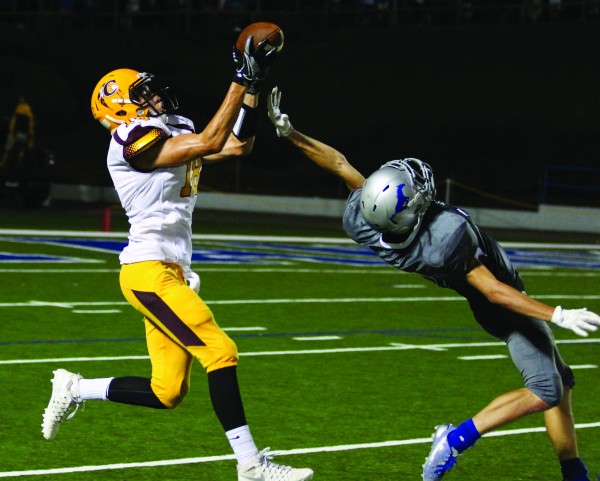 On the first play from scrimmage on their next possession, Cherokee fumbled the ball which was recovered by Cody Lominac, Mustangs sophomore free safety, at the Cherokee 34-yard line.

Cherokee started its fifth possession of the game at their own 25-yard line.  Mintz used his legs for three big plays during this 8-play drive including a 13-yard run, a 34-yard run aided by a huge block by Kendall Driver, Braves senior offensive lineman, and a 9-yard run up the middle of the defense for Cherokee’s first score of the game.  The two-point conversion failed, and Cherokee trailed 14-6 at the 11:51 mark of the second.

The Mustangs started their next drive in good field position at the Cherokee 46-yard line and put together a 9-play drive in under three minutes which culminated in a 3-yard touchdown run by Hooper.  Macke added the point-after kick and Smoky Mountain led 21-6 with 7:50 left before the half. 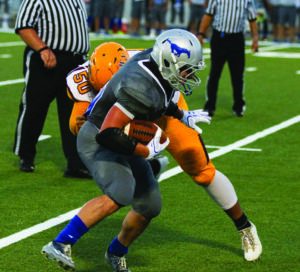 Smoky Mountain added a29-yard field goal late in the half to take a 24-6 lead into the locker room.

Ridley scored twice in the third quarter for the Mustangs on runs of 1-yard and 22-yards.  Both point-after kicks by Macke were good and Smoky Mountain led 38-6 going into the fourth.

Cherokee got some offense going late in the third quarter which carried over into the fourth.  On the sixth play of a drive that started on the Mustangs 41-yard line, Tye Mintz connected with Toineeta on a 22-yard touchdown pass down the left sideline.  The two-point try failed, and Cherokee trailed 38-12 with 10:59 left in the game.

Four plays later, Cherokee would get the ball back as George Swayney would intercept a Hooper pass and return it to the Braves 49-yard line.

Two plays after that, the Braves were back in the end zone as Tye Mintz again connected with Toineeta…this time on a 44-yard touchdown strike.  The two-point try failed again and Cherokee trailed by 20 (38-18) with 9:37 left in the game.

To view or purchase photos from this game, visit: https://onefeather.smugmug.com/SPORTS/FOOTBALL/BRAVES-FOOTBALL-2016/At-Smoky-Mountain-September-15/