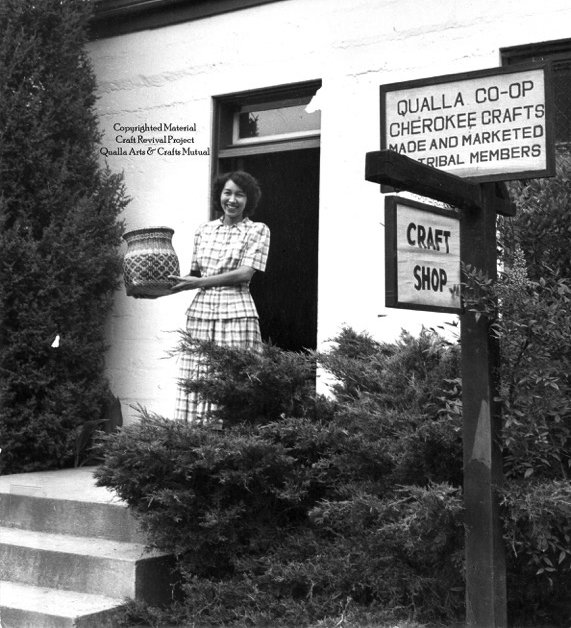 Cherokee arts and crafts have been done since time immemorial.  The marketing of those crafts to tourists and visitors to Cherokee is a relatively new thing in the big scheme of things – having started in gusto in the 1930s.

Since those early days, one organization has remained a constant in the marketing of art from the Eastern Band of Cherokee Indians.

“For over 70 years, Qualla Arts and Crafts Mutual, Inc. has served our community not only as a craft shop, but likewise as an organization dedicated to the preservation of traditional and promotion of contemporary Cherokee arts and crafts,” said Vicki Cruz, Qualla Arts and Crafts Mutual, Inc. director.  “As the oldest Native American cooperative in the United States, we strive to bring to our visiting public, quality, handmade wares.”

According to information from Qualla Arts and Crafts, the group – then named the Qualla Arts and Crafts Association – was officially formed on Aug. 23, 1946 with 59 charter members.  Several years later, the cooperative opened a storefront at the old Boundary Tree Development.  It operated there until 1960 when it moved to its current location.

According to a book entitled “Contemporary Artists and Craftsmen of the Eastern Band of Cherokee Indians”, “Sales in the cooperative grew from $7,000 in 1946 to $40,000 in 1955, and the cooperative was on its way.  In 1955, the organization was incorporated with the new name of Qualla Arts and Crafts Mutual, Inc.  A set of by-laws was drawn up by the Executive Committee at the advice of their legal counsel.”

A member of the Indian Arts and Crafts Board, the cooperative currently has over 300 members. 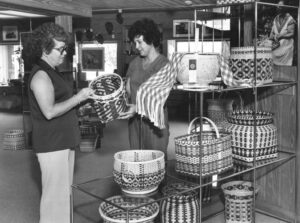 “The biggest contribution Qualla has given to the Tribe is the preservation of the culture with the unique arts and crafts,” said Denise Ballard, Qualla Arts and Crafts staff.  “I think we play a big part in educating the public when they come here because people think, ‘oh, I can make a basket’…but, so many people don’t realize that they go and chop a tree down, split it up, and the dyes are all natural.  They don’t understand that process. I think they get much more of an appreciation for it.”

She said the cooperative has been a model in Indian Country regarding marketing of arts and crafts.  “We have many other tribes contacting us and asking us about the process of setting up a cooperative, and we’ve shared that knowledge and that experience that we’ve had.  It’s lasting because you have generations of artists that are out of the same family.”

Over the years, the cooperative has had many noted Cherokee artists as members and staff such as Shan Goshorn, an EBCI basket weaver who has gained national notoriety.

“I worked at the Qualla Arts and Crafts Mutual as a teenager during the summers of 1985 and 1986,” she said.  “It was my exposure to the artists, craftspeople and, of course, becoming familiar with the final products that have continued to inspire and inform my work as a professional artist.”

Goshorn praises the cooperative’s legacy to the community, “In addition to providing a legitimate place to sell authentic Cherokee work, the co-op’s jurying process and pride of being a co-op member encourages artists to produce their best.  When I speak about Qualla Arts and Crafts, I always tell people that this co-op is the one that tribes all over the country emulate in an attempt to market the work of their tribal members.”