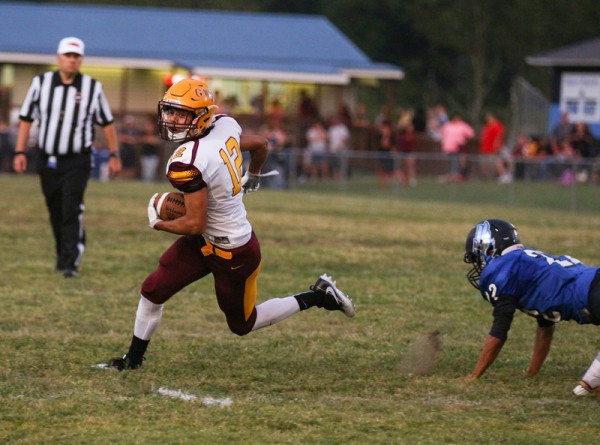 COSBY, Tenn. – Cherokee (3-1) remained undefeated in the state of Tennessee this season as they put up over 350 yards of total offense on Friday.  The Braves, on the road in Tennessee for the second time this year, blanked the Cosby (Tenn.) Eagles 42-0 on Friday, Sept. 9.

“It’s really good for our football team,” Kent Briggs, Braves head football coach, said of their win on Friday night.  “That’s what our job was, to come out here and get that done.  I thought they played really hard.”

He added, “We didn’t play smart all the time.  We have to keep correcting some mistakes that we’re doing especially personal fouls and things like that, facemasks, blocking in the back.  Things like that we have to improve on.  We can’t play a team in our conference or Smoky Mountain making that many mistakes.  We’ve got to just keep on working, but at the same time I’m very proud of our guys for playing hard and taking care of the win.”

Blake Smith led Cherokee’s ground attack with five rushes for 77 yards and two touchdowns and Tye Mintz ran four times for 24 yards.  Cherokee had 21 first downs in the game and Cosby had 15.  The Braves didn’t turn the ball over at all, and Cosby had five turnovers (three fumbles, two interceptions). 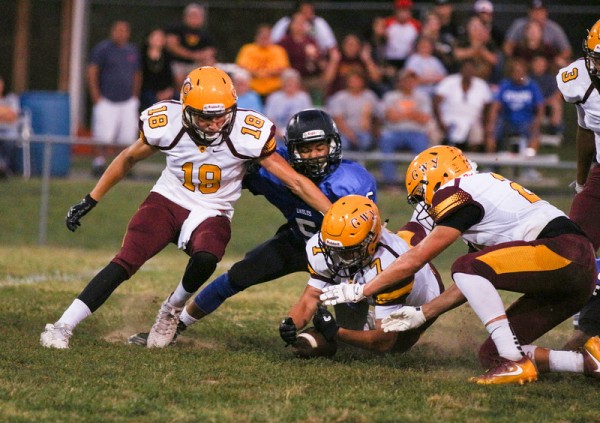 Cherokee’s George Swayney (#7) recovers a fumble in the first half.

The Braves were led defensively by Gary Teesateskie with 8 tackles followed by Toineeta with 7.

Cherokee held Cosby to a three-and-out on the first possession of the game.  The Braves took over at their own 29-yard line following the punt and put together a 10-play drive driving down to the Cosby 30-yard line before turning the ball over on downs.

The Eagles were unable to move the ball and punted back to the Braves after six plays.  Cherokee started its second possession in good field position at their own 47-yard line.  Five plays later, Smith ran 20 yards for the first score of the game.  The two-point conversion failed, and Cherokee led 6-0 with 2:31 left in the first quarter.

Cosby started at their own 45-yard line on their next possession, but they wouldn’t keep the ball long.  On third down, they fumbled the ball which was recovered by Cherokee’s George Swayney.

The Braves had a three-and-out on the ensuing possession and were forced to punt. 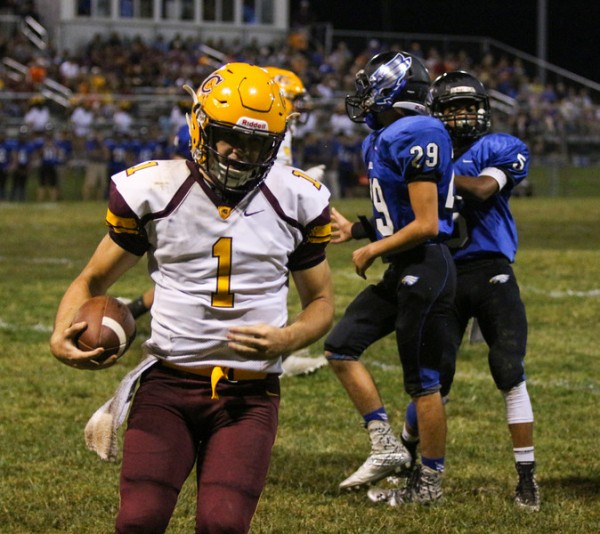 Tye Mintz, Braves junior quarterback, runs for a two-point conversion in the second quarter. On the night, he completed 13 of 21 passes for 235 yards and four touchdowns.

Cosby started at their own 34-yard line, but on second down Cade Mintz picked off an Eagles pass and returned it to the Cosby 30.

On the next play, Tye Mintz connected with Straughan on a 30-yard touchdown pass.  The two-point try failed and Cherokee led 12-0 with 9:47 left in the half.

The Eagles next possession only lasted two plays.  On second down, they fumbled the ball which was recovered by Cherokee’s Isaiah Armachain at the Braves 44-yard line.

A few plays later, Tye Mintz hit Toineeta over the middle.  Toineeta outran the Eagles defense en route to a 56-yard touchdown.  Mintz kept the ball for the two-point conversion to make it 20-0 Cherokee with 8:20 left in the second.

Cosby turned the ball over on downs on their next possession and Cherokee started at their own 39-yard line.  Four plays later, Tye Mintz hit Swimmer on a 33-yard touchdown play.  The two-point conversion failed and Cherokee led 26-0 at the 4:52 mark of the second.

Following a personal foul on the kickoff by the Braves, Cosby started in good field position at the Braves 45-yard line.  Seven plays in though, they would put the ball on the ground again.  This time it would be fallen on by Byron Locust at the Cherokee 17-yard line.

The Braves ran out the clock and took a 26-point lead into the locker room.

Cherokee got the ball first in the second half and put together an eight-play drive, 79-yard drive that culminated in a 46-yard touchdown pass from Tye Mintz to Cade Mintz.  Tye kept the ball and ran for the two-point conversion to make it 34-0 at the 8:21 mark of the third.

Both teams punted on their next possessions.  Cosby’s second possession of the second half was ended with an interception by Steven Meuse.

Four plays later, the Braves were back in the end zone as Smith ran 32-yards for his second score of the night.  He also ran for the two-point conversion to make it 42-0 with 1:34 left in the third.

Per Tennessee high school rules, once a team is up by 35 points, the clock runs continuously which it did for the remainder of this contest which ended with the Braves on top 42-0.

The Braves have a short week as they prepare to travel to the undefeated Smoky Mountain Mustangs (3-0) on a special game on Thursday, Sept. 15 at 7pm.  This game will be broadcast live on television on My40.

To view or purchase photos from this game, visit: https://onefeather.smugmug.com/SPORTS/FOOTBALL/BRAVES-FOOTBALL-2016/At-Cosby-Tenn-September-9/