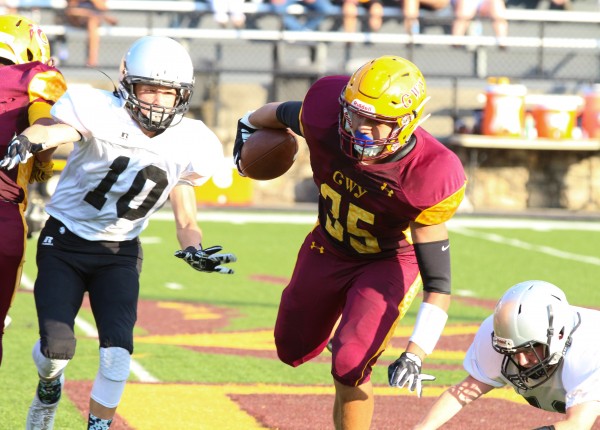 Fans of high-scoring games got their fill at Ray Kinsland Stadium as the Cherokee JV Braves (1-1) hosted the Robbinsville JV Black Knights on Wednesday, Sept. 7.  The Braves trailed by as many as 34 at one point and waged a second half comeback, but the Black Knights held on for the 52-36 win.

He said his players and staff are already looking forward to their next match-up – a special Saturday game (Sept. 17) at rival Swain.  “We’re going to prepare for Swain and go after them.  We’ve got to let this one go.”

Coach Robertson did praise his player’s tenacity.  “The big positive is that they didn’t quit.  We were down 52-18, and then we decided to come back.  We got some good plays kicked up, and we decided to play.  But, it was 16 points too late, so we’ve just got to stop that from happening.  The resilience is what was good about tonight.”

On the game, Cherokee converted 14 first downs and Robbinsville had 24.  Both teams had two interceptions, and the Braves lost one fumble.

Cherokee got the ball first in the game and was forced to punt after a three-and-out.  Robbinsville took over at the Braves 42-yard line following the punt and put together a nine-play drive that culminated in Anderson (#22) running in for a 3-yard touchdown.  He ran for the two-point conversion, and the Black Knights led 8-0 with just over two minutes left in the first.

Cherokee had another three-and-out on their second possession.  Robbinsville took over on their own 31-yard line and got back into the end zone four plays later.  Anderson took off on a 56-yard touchdown run.  Wilson (#10) ran for the two-point play, and the Black Knights extended their lead to 16-0 at the 9:18 mark of the second quarter.

The Braves wasted no time getting things going.  After starting on their own 35-yard line, Cherokee was in the end zone four plays later.  Santa Maria caught a pass from Crowe in the middle of the field and proceeded to thread the Robbinsville defense en route to a 63-yard touchdown.  The two-point try failed, and Cherokee trailed 16-6 at the 7:20 mark of the second.

The Black Knights ate up half of the second quarter on their next possession.  After starting on their own 32-yard line, Robbinsville put together a 13-play drive that culminated in a 4-yard run by Lawson.  The two-point try failed, and Robbinsville led 22-6 with just over one minute left in the half. 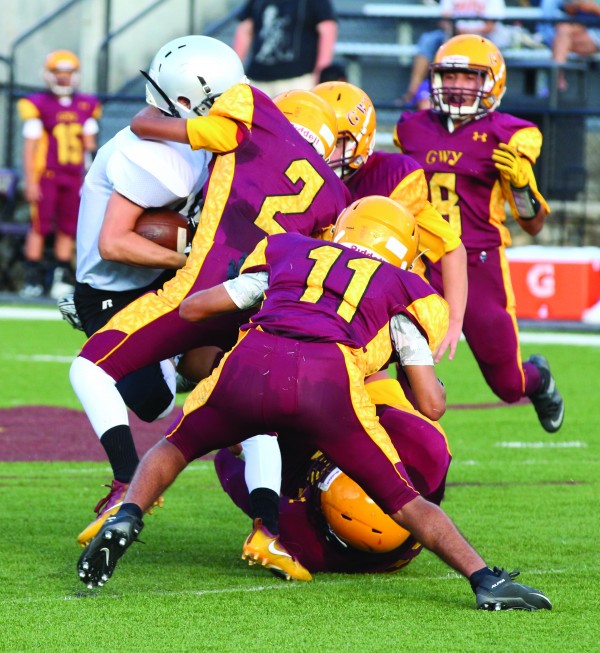 Cecil Walkingstick (#2) tackles a Robbinsville running back in the first half. He led Cherokee with 11 tackles.

There were only 77 seconds left before halftime, but there was still a lot of football left to be played.  Cherokee started its possession at its own 35-yard line.  On third down, the Braves fumbled the ball which was recovered by Robbinsville at their own 39-yard line.

Three plays later, the Braves were in the end zone.  Yep, the Braves…Pheasant intercepted a Robbinsville pass and took it 45 yards to the house with 4 seconds left on the clock.  The two-point try failed, and Cherokee trailed 22-12 at the half.

Robbinsville came out of the gates swinging and scored twice in the first three minutes of the third quarter as Anderson scored on a 32-yard run and a 16-yard pass.  Both two-point conversions were good, and the Black Knights had extended their lead to 38-12 just under seven minutes left in the third.

The Braves next possession, their sixth of the game, would start at their own 36-yard line and only take four plays and two minutes.  Crowe connected with Santa Maria on a 15-yard touchdown down the left side.  The two-point failed, and Cherokee trailed 38-18 at the 2:26 mark of the third.

The Black Knights hit quickly again and scored twice in next 70 seconds.  Following a 59-yard kickoff return by Anderson, Robbinsville started on the Cherokee 21-yard line.  On the first play of the drive, Hooper (#20) ran 21 yards for the score.  The two-point conversion failed, and Robbinsville led 44-18.

Three plays later, Robbinsville’s Lane (#34) intercepted a pass and ran it back 53 yards for the score.  Anderson ran for the two-point conversion to make it 52-18.

Cherokee struck right back though as Jaden Welch took the ensuing kickoff 76 yards to the house.  The two-point try failed, and Cherokee trailed 52-24 with one minute left in the third.

Several plays later, the Braves would get back into the end zone as Santa Maria would intercept a pass and run it back 63 yards for the score.  The two-point try failed, and Robbinsville led 52-30 as the third quarter came to a close.

The Braves added another score in the fourth quarter on a 4-yard run by A.J. Allison.  Again, the two-point try failed and Robbinsville ended up taking the win at 52-36.

(Note: Official statistics are not taken for JV games.  All stats provided here were compiled by One Feather staff at the game.)

To view or purchase photos from this game, visit: https://onefeather.smugmug.com/SPORTS/FOOTBALL/JV-BRAVES-FOOTBALL-2016/Vs-Robbinsville-September-7/