WHITTIER – The Sequoyah National Golf Club was listed as one of the top 20 golf courses in North Carolina in the September issue of Golf Magazine.  The ranking comes on the heels of a dramatic change in operation and approach to course management by ClubCorp Golf, who took over management duties in the fall of 2014.  Golf courses who receive these rankings are typically judged on condition, challenge, design, and service, all areas Sequoyah National employees emphasize towards guests.

“It’s an honor to be on the list alongside (golf) courses like Pinehurst No. 2, Pinehurst No. 4, and Tanglewood,” related Kenny Cashwell, General Manager of Sequoyah National.  “It should be a tremendous boost to the golf operation (here) and our reputation in our community.  What this team has done is created a product the Tribe could be proud of.”

In the fall of 2014, the course conditions at Sequoyah National fell under heavy duress and the outlook was bleak for locals and visitors who utilized the course.  Many golf and travel websites chastised the course with a string of scathing reviews with threats of never returning.   One reviewer stated, “4 of the greens had virtually no grass.  Like putting on a gravel road. (sic)” 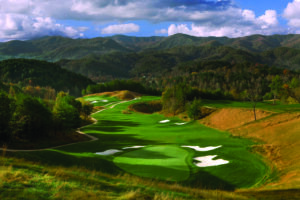 “My first week here, a gentlemen rated us a one, and the only reason he gave us a one is because he couldn’t give us a zero,” said Cashwell.  “Flash forward to January of last year, on TripAdvisor, we’ve had 100 percent five-stars with the exception of one four-star.  I think that’s primarily attributable to the hard work Brandon and his team have put in.”

A major contributing factor to the reversal of conditions at Sequoyah National is the amount of time and effort put into the course by Golf Course Superintendent, Brandon Burns.  It is not uncommon for the early bird golfers to meet Burns working on the course in the early morning hours before the sun completely rises.  Alternatively, it not uncommon for Burns to still be working as the twilight golfers drive their cart back to the clubhouse following their round.

“In the summer, grass gets under a lot of stress and we have to stay here and watch it,” explains Burns. “You can’t leave it at 1:30.  You have to be with it all the way until 6pm, usually.  We try to alleviate as much stress on the grass as possible.  It needs a lot more attention than other golf courses.”

Burns continued, “The first summer (2015) was about having grass and wasn’t 100 percent about playability.  “This year, one of the main goals was concentrating on playability and continual improvement.  I think that led to people noticing us more and more.”

The team at Sequoyah National is confident their renewed outlook will help drive tourism in the Cherokee area.

“Hopefully, in the future, it brings in more cliental, more tournaments, and more golfers on the course,” related Carr Crowe, an EBCI tribal member who is the head golf pro at the course.  “With people seeing the ranking, maybe that gives guests a good reason to visit the mountains and play golf while visiting the area, as opposed to traveling elsewhere.”

The Sequoyah National Golf Club is an enterprise of the Eastern Band of Cherokee Indians and managed by Sequoia Golf Management, a division of ClubCorp.