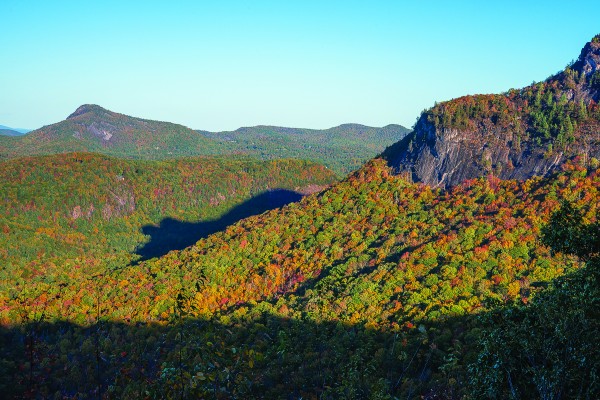 “The Shadow of the Bear” is one of three photographs by EBCI tribal member Jeremy Wilson being featured in an exhibit by the Arts Council Fayetteville/Cumberland County entitled “Contemporary Art Forms by America’s First People”. (Photo by Jeremy Wilson)

Whether it’s capturing the wings of a hummingbird or patiently waiting on a mountainside for an elusive shadow to be cast, Jeremy Wilson will be there with camera in tow.  The EBCI tribal member’s photography is being featured currently in an art installation entitled “Contemporary Art Forms by America’s First People”.

Information from the Arts Council states, “While art by America’s First People is deeply rooted in tradition, the work in this exhibition is contemporary and shows the perspective of Native American artists who are living and creating today.”

Three of Wilson’s photographs are on display at this exhibit including 12” x 24” canvases entitled “Shadow of the Bear”, “Clingman’s Dome Sunrise”, and “Hummingbird”.

In thinking of the exhibit as a whole, he commented, “Contemporary art can be defined differently depending on which artist you’re talking to, but the definition of contemporary art is capturing creation in the moment.  So, for ‘Shadow of the Bear’, I watched it unveil itself.”

Wilson said sitting on Whiteside Mountain in mid-October waiting for the shadow requires patience.  “You’re watching this thing appear from start to finish so you’re actually watching it live happening in front of you – a rare phenomenon that only happens twice a year.  So, to be able to capture that from start to finish would be my definition of contemporary – capturing that creation in the moment.”

Photos such as his “Hummingbird” piece which literally stops the wings of the bird in a moment in time, take a different kind of patience.  “That’s something that you’re capturing as it swoops in.  That’s something that you just don’t get.  For me, it took an hour to get that photo.  You’re talking changing shutter speeds, light and things of that nature, and for me, that’s the artful part of it.”

The artistry of photography is what draws Wilson, “A lot of people think, when they’re not artists, that you just do it and that I just walk up to the bird and say, ‘hey, let me take your photo’, but you have to really be patient and you have to really be inspired by the moment.  For most people, they just see the hummingbird come in, get its food from the feeder and take off, but for me, I’m watching the detail of how all of that is going.”

He said once, while sitting by a feeder, he could feel the wind coming off of a hummingbird’s wings.  “When you’re outside of contemporary art or art in general, you kind of look at life in black and white, and you’re just going through it.  But, being a photographer has allowed me to see life in detail.”

On a trip up to Clingman’s Dome in the Great Smoky Mountains National Park on a foggy, rainy morning, he captured one of his favorite shots. “I drove all the way up there so I was trying to find something to take a photo of while I was up there so I found some water coming off a rock.  So, I said to myself I’ll try to test my ability to capture water coming off of a rock using a high shutter speed.  I felt it getting a little bit warmer, and the rain was tapering off when I saw some light coming through, bouncing off rocks, and I could see the sun trying to come out.  So, when that happened I looked behind me and it was all clear and there was this giant rainbow.”

Patience is the key.  “For me, being a photographer, while I’m up there I’m using my time to try to find something to capture, and while I’m being patient, I turn around and there’s this huge, possibly once-in-a-lifetime event, that’s cascading all across the sky as a double rainbow.”

To view or purchase photos from Wilson, visit his website at https://www.jeremywilsonphotograph.com/.  For more information on the exhibit, contact the Arts Council Fayetteville/Cumberland County (910) 323-1776, admin@theartscouncil.com