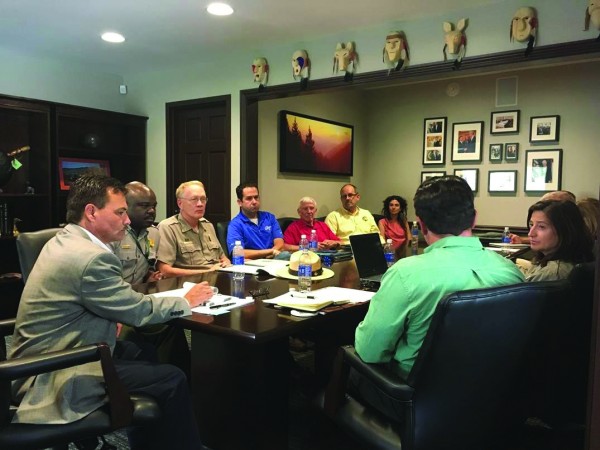 Eastern Band of Cherokee Indians leaders meet with officials from the Great Smoky Mountains National Park to begin discussions on new regulations for the gathering of traditional plants by tribal members in the Park. (NPS photo)

Cherokee people have gathered traditional plants and medicines on their homeland areas since time immemorial.  In recent years, some have met with legal issues when trying to gather within the confines of the Great Smoky Mountains National Park.

After much debate and work by leaders of the Eastern Band of Cherokee Indians and other tribes and National Park Service (NPS) officials, new regulations have been put into place whereby members of federally-recognized American Indian tribes will be able to legally perform traditional gathering of plants in national parks that encompass their traditional territory.

But, while the new rules took effect Aug. 11, tribal members will still have to wait until tribal and Park Service officials hammer out the details before they can start their harvesting.

EBCI and NPS officials met recently to begin discussions on the new regulations.  “We held our first meeting with the National Park Service to begin the process to get an agreement signed that will allow our tribal members to once again be allowed to enter upon NPS lands and gather foods and medicines,” said Principal Chief Patrick Lambert.  “Our people have gathered foods and medicines for thousands of years, and we look forward to continue that traditional gathering with the support of the park officials.”

He went on to say, “I would like to thank the National Park Service for coming to the table with great ideas and an open approach to making this a reality for enrolled members.  The meeting went very well, and we are building a solid foundation with our partners in the National Park Service to create a process for approvals.  We have a strong relationship established with Park Superintendent (Cassius) Cash and his team and the other agencies and research partners present in the meeting as well.”

Superintendent Cash echoed Chief Lambert’s sentiments about the meeting.  In a statement, he said, “We look forward to working with the Tribe to both honor Cherokee Indian traditions and also carry out our agency’s mission to protect these very special resources for future generations.  I truly believe that we can achieve both of these goals by working together.”

The first step in this process will be the completion of Environmental Assessments (EAs) and a finding of no significant impact (FONSI).  Park officials related that the EAs will help managers “determine appropriate quantities and locations for traditional gathering that will ensure sustainability and protection of the selected species”.  Commercial gathering of the traditional plants is still prohibited.

Jeremy Hyatt, EBCI Natural Resources director, related, “The EBCI Natural Resources department has built a strong research partnership with both the U.S. Forest Service and the N.C. Arboretum focused on culturally-important plants that will assist in the development of environmental assessments conducted by the Great Smoky Mountains National Park under the rule change agreement.  We plan to expand research as well as develop outreach and training initiatives to assist in developing gathering agreements that work for both tribal members and the Great Smoky Mountains National Park.”

Hyatt said a letter being drafted by Chief Lambert now is requesting the agreement to include the traditional gathering of sochan and ramps.  “Both plans have been identified as traditional gathering priorities at this time.  It has been determined that the development of the Environmental Assessment for gathering sochan will commence prior to the assessment for ramps due to the availability of more scientific data supporting the premise that harvesting will not significantly impact park populations.”

Park officials related they hope the EA for sochan will be completed in the next 12-18 months.

Jonathan B. Jarvis, NPS director, said in a statement on June 29 when it was announced that the rule changes were approved, “The changes to the gathering rule support continuation of unique cultural traditions of American Indians and support the mission of the National Park Service.  This also respects tribal sovereignty and the government-to-government relationship between the United States and the tribes.”

He visited Cherokee six years ago for a Tribal Consultation Meeting with EBCI tribal leaders.  During the meeting, traditional gathering of plants was discussed and Director Jarvis expressed his support for changing the rule which he stated was “just wrong”.

The 55-page rule reads in part, “The National Park Service is establishing a management framework to allow the gathering and removal of plants or plant parts by enrolled members of federally-recognized Indian tribes for traditional purposes.  The rule authorizes agreements between the National Park Service and federally-recognized tribes that will facilitate the continuation of tribal cultural practices on lands within areas of the National Park System where those practices traditionally occurred, without causing a significant adverse impact to park resources or values.”