Cherokee pauses to honor those who served 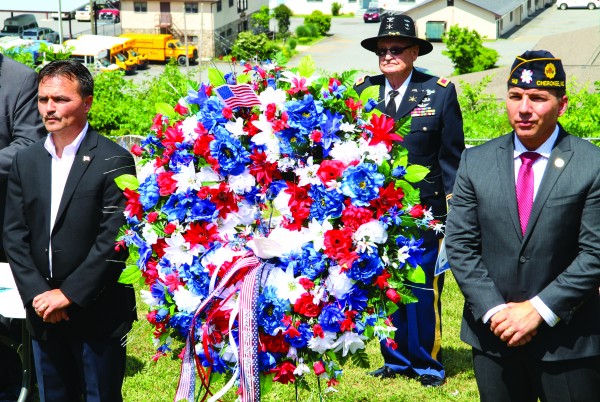 A gentle breeze fell over Yellowhill Veterans Cemetery as Cherokee took a few moments on Monday morning to honor those who gave the ultimate sacrifice for their country.  The Steve Youngdeer American Legion Post 143 held a Memorial Day Observance Ceremony at the Cemetery on Monday, May 30.

“The men and women buried here at Yellowhill, at Arlington, and in military cemeteries around the world paid a great price for all the freedoms that we hold dear,” said Post 143 Commander Lew Harding.  “Those freedoms, that we sometimes take for granted, are reminders of the ultimate sacrifice and our debt to these fallen brothers and sisters.  It’s hard to complain about the high cost of anything this weekend as we remember the high cost that they paid for us all.”

He went on to say, “Our brave American soldiers have placed their lives on the line for a society that sometimes is unwilling to appreciate their sacrifices.  They support our troops, but most go about their daily lives and make very few sacrifices.  Some don’t even have a clue about the deep and profound meaning that brings us all here today.” 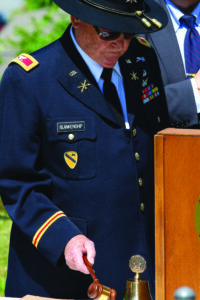 Commander Harding said each new generation “must relearn and recommit” to honoring the sacrifices of America’s servicemen and servicewomen.  “This nation was built on the blood, sweat and tears of countless Americans and many others.  We cannot let those sacrifices be in vain.”

Principal Chief Patrick Lambert, a U.S. Army veteran, spoke about Memorial Day itself and remarked, “They each have stories to tell, the crosses at Normandy, the tombs at Arlington, the markers here in this Veterans Cemetery, and the fallen heroes who rest in places unknown.  From our founding Revolution to today’s global war on terrorism, nearly 1,000,000 men and women in the Armed Forces have sacrificed their lives while defending America in a time of war.” 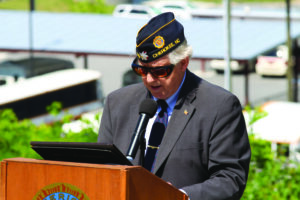 Chief Lambert said the number of American Indian servicemen and women is staggering and totals over 200,000 since World War II. He said Memorial Day has always had a special meaning for members of the Eastern Band of Cherokee Indians.

“The brave men and women who have left our mountains to serve thousands of miles away in the searing hot jungles or in the frosted mountains in Korea, the beaches at Normandy and many other places, stand as symbols of their strength, bravery and belief in the nation and in our Tribe,” Chief Lambert commented.  “We can never repay this debt we owe these brave men and women, but, because of them, Cherokee families are able to sleep safely.”

Following Chief Lambert’s remarks, Vice Chief Richard G. Sneed, a U.S. Marine Corps veteran, read a list of names of EBCI tribal members killed in action in World I, World II, Korea, and Vietnam. After reading each name, Col. Bob Blankenship (Ret.), U.S. Army, rang a bell in their honor.  At the end of the ceremony, Chief Lambert, Vice Chief Sneed, Maj. William Underwood, and Staff Sgt. Clifford Long placed a wreath at the gateway to the cemetery.  The Post 143 Color Guard then fired a 21-gun salute honoring all of the fallen heroes.

To view or purchase photos from this event, visit: https://onefeather.smugmug.com/2016-Community-and-News-Events/Cherokee-Memorial-Day/i-tCdGXS5