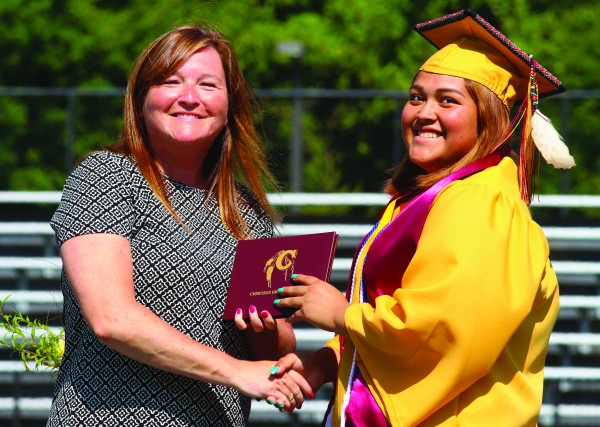 Blue skies and a slight breeze helped usher 59 Cherokee High School students across the stage to receive their diplomas during a commencement ceremony at Ray Kinsland Stadium on the morning of Saturday, May 28.

“It doesn’t matter if you have spent all four years here or if you have only been here for a year, you are a part of our Brave family,” CHS principal Debora Foerst told the graduates at the beginning of the event.  “And, as a family, we have laughed, cried, argued, hugged, yelled, whispered and cheered together.  We have suffered our greatest losses and have experienced our highest accomplishments together.”

She went on to say, “In a few short minutes, you will no longer be high school students.  You will embark on your future.  For I pray you will make good decisions knowing that even when you make mistakes, you can learn from them.”

Salutatorian Kieran Sequoyah thanked teachers and faculty and commented, “Even though a lot of things are coming to an end, one thing will always be true and that is the fact that we will always be Braves…we are all going on to much better things whether it be in college, or work or something else…among us are college-bound athletes, scholars, and future doctors, lawyers, teachers, nurses and other professionals.”

Valedictorian Brittney Driver said graduation is a time of reflection.  “We find ourselves reflecting on the friendships we’ve made and the memories we’ve shared with others.”

She said the Class of 2016 has faced and overcome many challenges along the way.  “As we take the next step and go our separate ways, whether it is going to school, going straight to work or whatever you choose to do, I would like to wish everyone the best, and I hope that you become successful in whatever you choose.” 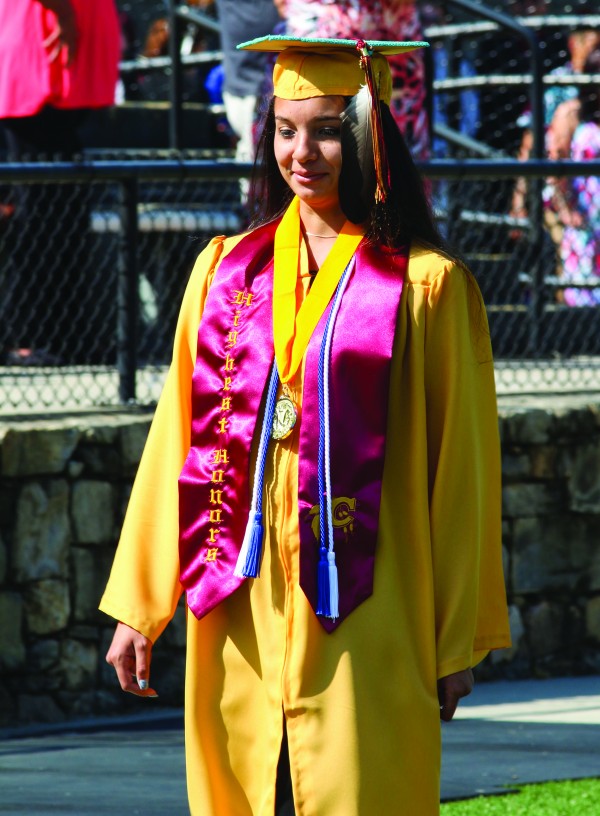 Valedictorian Brittney Driver enters Ray Kinsland Stadium at the beginning of the event.

Driver added, “I also hope that everyone here that is graduating goes far in life and gets to get away from our small town and see the world that is out there waiting for us.”

Following the Salutatory and Valedictory speeches, Loretta Bolden of the NAIWA Cherokee Chapter presented Certificates to both Sequoyah and Driver for their academic achievements on behalf of the organization.

Then, Chloee McEntire, CHS Class of 2016 president, gave a brief address in which she said, “You only have one chance to live your lives, so have fun with it. Be curious. Make mistakes. It’ll be ok. Nobody should be scared or have a fear of failure, because it’s inevitable. The number of times we fail doesn’t define us. Life is about getting back up, trying again, and that’s what makes us who we are.”

To view or purchase photos from this event, visit: https://onefeather.smugmug.com/2016-Community-and-News-Events/Cherokee-High-School/ 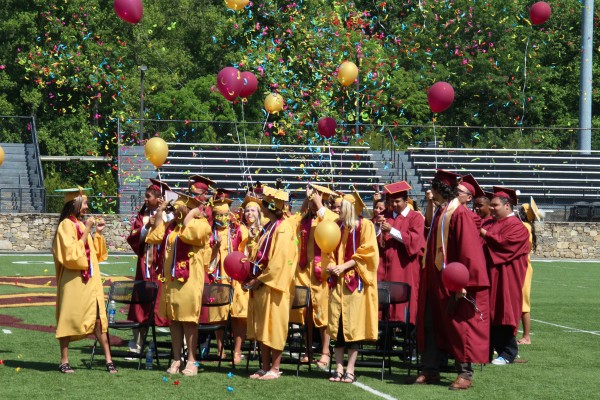