Diversification opportunities discussed at Planning Board 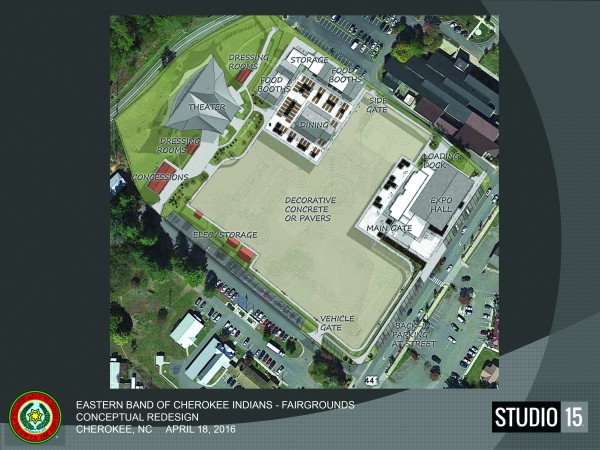 By ROBERT JUMPER
ONE FEATHER EDITOR

A specially-called Planning Board meeting was held in Tribal Council Chambers on Tuesday, May 24.  The first order of business for this session was the election for chairman and vice chair with Yellowhill Rep. B. Ensley being chosen to serve again as chairman and Painttown Rep. Tommye Saunooke being chosen as vice chairperson. The selection of the business person and elder to serve on the Board was put on hold.

Old business included Deas doing a follow-up on the Yellowhill Tower Permit. It had been approved in Business Committee for a US Cellular Tower to be placed in Yellowhill. Cherokee Broadband will be stay active on the new tower. Chuck Burton, from US Cellular, addressed the Planning Board. His statement was that the tower will belong to the Cherokee Boys Club and the Tribe. Planning Board approved the erection of the tower.

Destination Marketing Manager Tonya Carroll shared an update for her program. She showed a PowerPoint outlining potential redevelopment of the Cherokee Indian Fairgrounds. Her projects included a new floor at the Cherokee Welcome Center; preparation for Cherokee Days at Washington, D.C.; Cherokee Day at Asheville Tourists; and an Our State Magazine bus group. She is working with Deas and Jacob Reed to organizing a Harley Rally (projected for Sept. 9-11). She said the program is also meeting to discuss a Solar Eclipse event set for August 2017.

Carroll also shared the Fairgrounds Conceptual Master Plan-artist renderings. She stressed, “This is in the early planning stages. These are just drawings of what it could be and will more than likely change during the planning and design process based on the community feedback we receive.”

When Planning Board asked for a cost estimate, Carroll quoted an initial price tag of $10 million to make the changes but said additional study is needed to provide a true cost. The plan includes expanding food booths, moving stadium lights to the outer perimeter of the grounds, providing more outdoor useable space and exhibit hall space. The plan also calls for the entire outdoor event area to be resurfaced to be more compatible with elder and handicapped pedestrian traffic. The Fairgrounds renovation was put on a project list for further discussion by the Planning Board.

Economic Analyst Jacob Reed updated the Board on the renewal of a data source contract with Out of this World Contract renewal. The company provides industry business data that is available for comparison. Concerning the progress of developing a Harley Rally, Reed stated that the producer needs more data. Mark Creswell, Worldwide Dynamics from Old Fort, is the Harley Rally producer.

Reed said that he is also working with Cameron Cooper on the waste-to-energy project profitability model. The equipment is at the transfer station and there is a demonstration of the operation of the pyrolysis process which started on Thursday, May 25. Reed shared that Fisheries is looking for new facilities and he is working on how much it will cost. He is also working on reports for Cherokee Phoenix and accommodations profitability and projections; and Saunooke Village levy analysis.

On the directive to initiate the downtown improvements, Cole stated that he is working with CDOT to determine best approach and what is allowable. He reported on the Cherokee Preservation grant status for the Comprehensive Economic Development Strategy which will be handed in July 6 for October awards cycle.

A groundbreaking date for the new bowling alley at Harrah’s has been tentatively set for July 9.

The Elementary School site Archeological study, being done by TRC out of Chapel Hill, will take two to three years to complete, and data will be ready approximately January 2017. Chief Lambert said he wants to move ahead immediately with the study instead of waiting until after the rodeo scheduled for Labor Day weekend. Planning Board says to move ahead with the site study immediately.

Secretary of Commerce Duvall reported on retail recruitment with the Cordish Company.

Duvall stated, “David Cordish and the Cordish Company have a long history of working with Native American Indian Tribes such as the Seminoles in Hollywood, Fla.  Cordish franchised and developed the Hard Rock brand which is used by their Casino and retail and is now famous world-wide.  The largest Hard Rock Guitar sits atop the Cordish Company Headquarters in Baltimore Maryland (which was formerly the old Baltimore Power Plant Cordish Company renovated).  The potential of the Cordish Company developing 200,000 square feet of retail in Cherokee is now in the negotiation stages only.  We do not yet have a done deal.  Our department is making the Planning Board aware that we have a world class client at the table that is interested in developing retail, restaurants and entertainment venues in Cherokee.”

Chief Lambert, Duvall and members of Tribal Council have visited the Cordish Company headquarters in Baltimore and a second trip is planned. On Tuesday, June 7, Cordish will make a presentation to tribal leadership at the casino to share potential opportunities.

Duvall said Earth Fare is another retail developer from the region who may be interested in developing retail in Cherokee. Trader Joe’s management were not interested in working with the Tribe at this time as their current business models call for development in metropolitan areas. Target management did not express interest in working with the Tribe, but CVS, Walgreens and Tractor Supply and another large box store are communicating with Commerce.

Duvall indicated that the new entrance sign at the intersection of Hwy 441 and Casino Trail Road is still in planning, but progress is being made. The owner of the property surrounding the sign location has agreed to a monthly lease agreement. Planning Board moved to hold this project until they could make a site visit.

Finally, a downtown study conducted by retail development, planning, and GIS has revealed several possessory holders may be interested in selling their holdings back to the Tribe. The study is part of the Principal Chief’s overall plan to renovate the downtown area. The study also produced a detailed listing and comparative information to help the Tribe better plan for future development and make reasoned investment choices.

Retail Development Specialist Cameron Cooper reported that he has been ensuring that the pools of water at the Cherokee Fun Park (the park is not in operation) are drained to prevent breeding grounds for mosquitos. The bumper boat pool and other areas so not have outlets to be drained, so this must be done manually. He also reported on a tool called Buckston that he introduced as another data resource to better understand the best comparative communities to get projections. He concluded reminded board of pyrolysis demonstration scheduled at the transfer station.

Principal Chief Lambert commented on on-going efforts to maintain the street side areas. Rep. Saunooke stated that the business areas look better than they have in a long time. Rep. Ensley then adjourned the May meeting of the Planning Board.