ASHEVILLE – The Mountain Amateur Athletic Club held the 55th WNC Sports Awards Banquet at the OMNI Grove Park Inn in Asheville on Sunday, May 15 where the Cherokee Braves basketball team and three individual members of the Braves and Lady Braves were nominated for awards as the best athletes in western North Carolina. 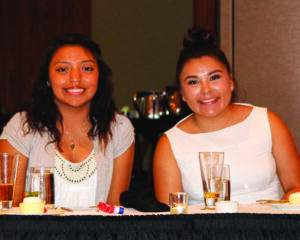 Pooh King and Bree Stamper sit with other nominees at the MAAC Awards Banquet at the OMNI Grove Park Inn on Sunday, May 15. Both were members of the 2015-16 Lady Braves Basketball team and nominated for the Wells Fargo 1A/2A Female Athlete – Major Sports award. (AMBLE SMOKER/One Feather photos)

The Cherokee Braves men’s basketball team was nominated for the BMW of Asheville 1A/2A Male Team – Major Sport.  The Braves finished the season with a 25-4 record and the Smoky Mountain Conference and 1A West Sectionals Champions.  They also advanced to the fourth round of the NCHSAA State Championships.  Other nominated teams included Asheville Christian Academy (Soccer), Mitchell High School (football), and Robbinsville High School (football).  Asheville Christian Academy was the recipient of the award. 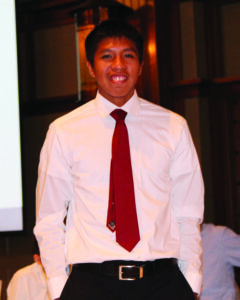 Jason McMillan stands during the introduction of nominees for the Dr. David L. Carpiello, MD 1A/2A Male Athlete – Major Sport award. He was also nominated as a member of the Braves men’s basketball team for the BMW of Asheville 1A/2A Male Team – Major Sport and the Darlene and John McNabb Male Athlete of the Year award.

As the final and most prestigious award of the night, McMillan was nominated for the Darlene and John McNabb Male Athlete of the Year.  Nominees from this category were selected for the best male athlete in any category which encompassed 1A through 4A schools from western North Carolina.  Other nominees included Dalton Beaver (Mitchell), Rico Dowdle (Reynolds), and Jacob Gass (Smoky Mountain).  Beaver was the recipient of the award.

The Mountain Amateur Athletic Club was founded in 1957 by Gene Ochsenreiter.  The MAAC has a long and distinguished reputation as the leader in recognizing sports achievement in western North Carolina.  More than 4,000 local athletes and teams have been honored at the WNC Sports Awards banquet and have had such distinguished speakers as Roy Williams, Adolph Rupp, and Danny Ford.