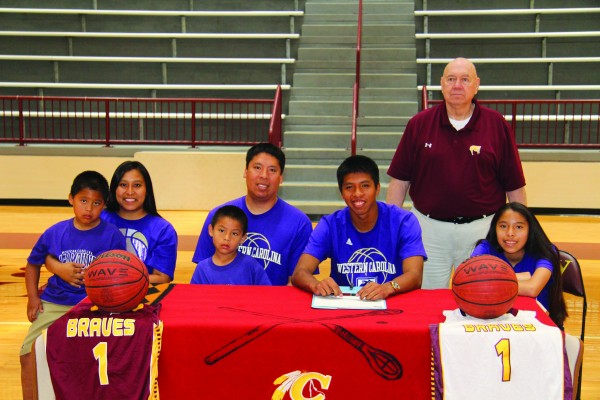 Jason McMillan, Braves senior point guard, will continue his basketball career this fall at Western Carolina University.  After committing to the school several weeks ago, McMillan signed a letter of intent during a ceremony on Thursday, May 12 at the Charles George Memorial Arena – where he scored most of his 1,064 career points.

“It’s very exciting,” McMillan, a member of the Mississippi Band of Choctaw Indians, said on Thursday.  “I’ll be honest with you, I didn’t think I would make it to play D1 college basketball, maybe for baseball, but that was really a dream come true.”

Barry McMillan, Jason’s father, noted, “When he first started playing basketball, we knew that he was pretty special in wanting to achieve all of his individual goals…we’re very excited for him.  He’s got many other goals that he is going to go for, and we’re definitely going to be supporting him.”

He thanked the Cherokee community for their support.  “We really appreciate everybody.” 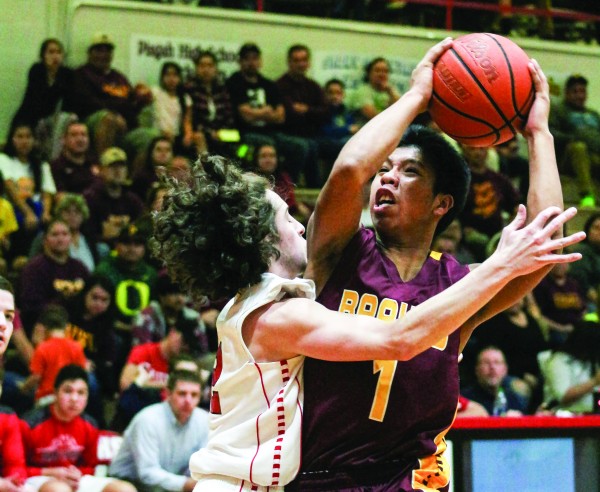 McMillan (#1) goes hard for the basket during a game this past season at Franklin.

Larry Hunter, WCU head men’s basketball coach, said in a statement.  “Jason is a very athletic and talented guard.  He has outstanding quickness and speed and has the necessary ball handling, passing, and scoring skills to develop into a good player at this level.  We are very impressed with Jason’s competitive motor and determination as well as his poise as a player.  He will be in the WCU honors program and has been a multiple sport athlete in high school and plans to also try and play baseball at WCU.”

Jason McMillan played three seasons for the Braves and one for Choctaw Central (Miss.).  As a senior, he helped lead Cherokee to the Big Smoky Mountain Conference regular season title as well as the Conference tournament championship and a fourth round appearance in the state playoffs.

Willis Tullos, CHS head boys basketball coach, said he has watched Jason grow up and is proud of his accomplishments on and off the court.  “It’s a great, great day for us and our program and a great day for Jason and his family.  It’s not often that you get a chance to go play Division I athletics and especially from a school our size.”

Coach Tullos said Jason’s signing has major implications for the school as well, “To have him recognized and have our program recognized as having an athlete of the caliber to go play D1 sports is a fantastic thing for us.  I am thrilled for him, and I’m also thrilled for our program because now our kids that are coming up will have the opportunity to be recognized and to follow in his footsteps.”

Debora Foerst, CHS principal, commented, “We appreciate this family and what they mean to us, and we really appreciate Jason and the example he has set for his brothers and his sisters, for the student he has been and the athlete he has been.  We’re proud of him today.  We’re proud of what he’s accomplished so far and can’t wait to see him continue wearing that beautiful purple.” 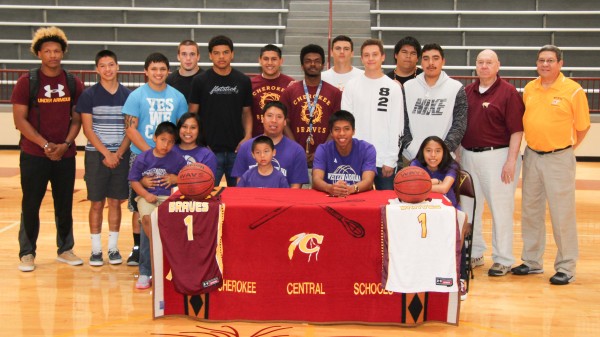