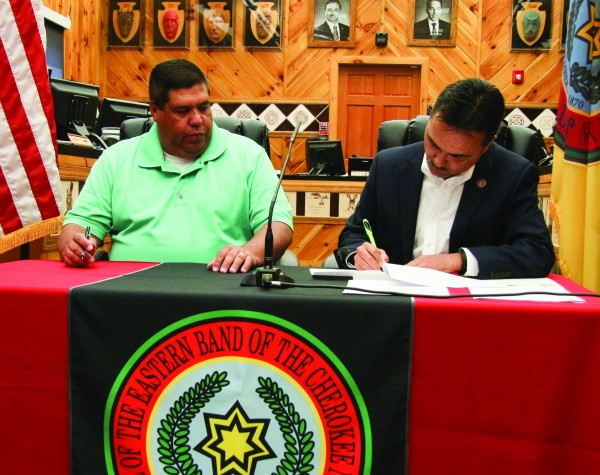 With Tribal Council Chairman Bill Taylor looking on, Principal Chief Patrick Lambert (right) signs a document during a ceremony on Tuesday, May 10 in which the bank notes for the new Cherokee Indian Hospital and the Cherokee Waste Water Treatment Plant were paid in full. (SCOTT MCKIE B.P./One Feather photos)

Five days after Tribal Council approved legislation to pay off the loans on the new Cherokee Indian Hospital and the Cherokee Waste Water Treatment Plant, the notes were signed and the loans were paid in full to First Citizens Bank.  Principal Chief Patrick Lambert and Tribal Council Chairman Bill Taylor signed the notes during a ceremony in the Tribal Council Chambers on Tuesday, May 10.

The hospital loan amount paid on Tuesday totaled $69,944,114.01, and the waste water treatment plant loan totaled $26,024,198.23.  In addition to the bank notes, Chief Lambert and Chairman Taylor signed two pieces of legislation into law including the resolution approving the loans to be paid in full as well as a resolution, submitted by Painttown Rep. Tommye Saunooke, changing the floor of the Tribe’s Debt Sinking Service Fund from $25 million to $100 million.

“Every day that we wait on what we’re about ready to take care of today costs this Tribe over $5,000 to the bank, and so, we thought ‘why wait another day’?” commented Chief Lambert.  “Today, I’m happy to report that what we’re getting ready to do is to make the Tribe, for the first time in recent history, 100 percent debt-free.”

He thanked the efforts of Tribal Council, Vice Chief Richard G. Sneed, and the various tribal employees who worked on the issue.

“We debated this over several meetings.  We looked at it from all different angles.  Everybody got fully abreast of all the different issues.  We still had a couple of Council members that had concerns about it.  We understand that.”

Chief Lambert added, “Getting the Tribe out of debt in this part in our history I think is of vital importance, and I want to say thank you to all of the Council. The positive relationship between my office and Tribal Council is being proven here today. I’m very optimistic about the future of this Tribe and where we’re going.”

Chairman Taylor said, “This is a very big day for the Tribe.  It’s the first time since I’ve been here that we’ve been debt-free.  Starting today, we’re debt-free, and I’m looking forward to working with the Executive Office and Tribal Council.  We’ve got some good projects coming up.”

He further related, “We’re debt-free, and a lot of this stuff we’re going to be able to do internally, with our own monies, and continue doing good things for our people.”

Big Cove Rep. Teresa McCoy commented, “This is a wonderful event.  I know that there’s skepticism, and there were a lot of questions in our communities about this…I have campaigned for years to reduce the Tribe’s debt.  This was a good time to do it.  It’s a great time to recover.  I’m just looking forward to us being debt-free and re-accumulating a lot of money.”

Big Cove Rep. Richard French noted, “That’s what we all heard when we campaigned, ‘we need to get out of debt’, and I think this is a great day for the Tribe, but it also shows that when we work together, there’s things we can do for this Tribe and that’s what we need to think every day.  We’re here for the people of the Eastern Band, and we need to keep doing that so that good things will happen like happened today.” 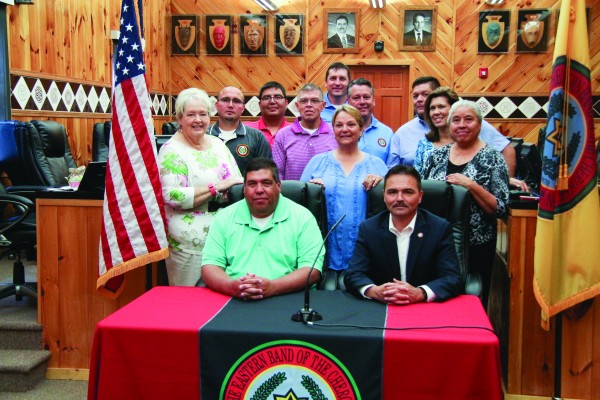 Birdtown Rep. Travis Smith said, “We had some pretty hard discussions on this issue from the very beginning.  There were still some thoughts at the end, but we did support this issue and move forward with it, and I think we’ll have some good discussions moving forward on some future projects…I think it’s going to help our Tribe moving forward into the future from here on out.”

Yellowhill Rep. Anita Lossiah related, “We are very fortunate, and I feel very secure that the Tribe is in a very strong financial point right now.  We are all very fortunate to be here.  There are a lot of very exciting, upcoming projects that we hope to all be a part of in the near future.”

Vice Chairman Brandon Jones said, “Any time you can get these debts paid off, it’s a wonderful thing.  You look at what we’ll save in interest and things of that nature, and that’s money that we can put towards our new projects.  We’ve all got projects in our communities that we want to work on and get moving on, and I just think that we’re very blessed and very fortunate to have this opportunity.”

Wolfetown Rep. Bo Crowe added, “Right now, we have some exciting stuff that we’re getting ready to start bringing to the table here.  I’d like to thank everybody, the employees, everybody that had anything to do with this.”

Then he joked, “So, we probably made the bank pretty mad though right?”

Cherokee County – Snowbird Rep. Adam Wachacha said he was happy to receive many phone calls on the issue. “I appreciate our constituents out there that voiced their concerns and opinions.”

Birdtown Rep. Albert Rose commented, “This is what the people wanted, and it is going to move our Tribe forward.  We’ve got a lot of good projects coming up, and we can’t wait to share that information with you guys once we get moving forward.”

Painttown Rep. Marie Junaluska thanked everyone and said, “This is a big day for everyone.  The tribal members have voiced the need that we need to get out of debt.  We heard it all the time.  So, today it has happened, and I know that everyone is happy out there.”

Rep. Saunooke simply commented, “I’m not going to be repetitive as it’s all been said, but I remember the words of Elias Boudinot, ‘This is a great day for the Cherokee.’”

Chief Lambert rounded out the comments by thanking the bank again and stating, “We do look forward to going forward with the bank partners and the bank relationships that we have.  The Tribe is in a very strong position partly due to their partnership with us and funding some of the big projects that we’ve had over time.  But, it’s a good thing today, we are debt-free.”