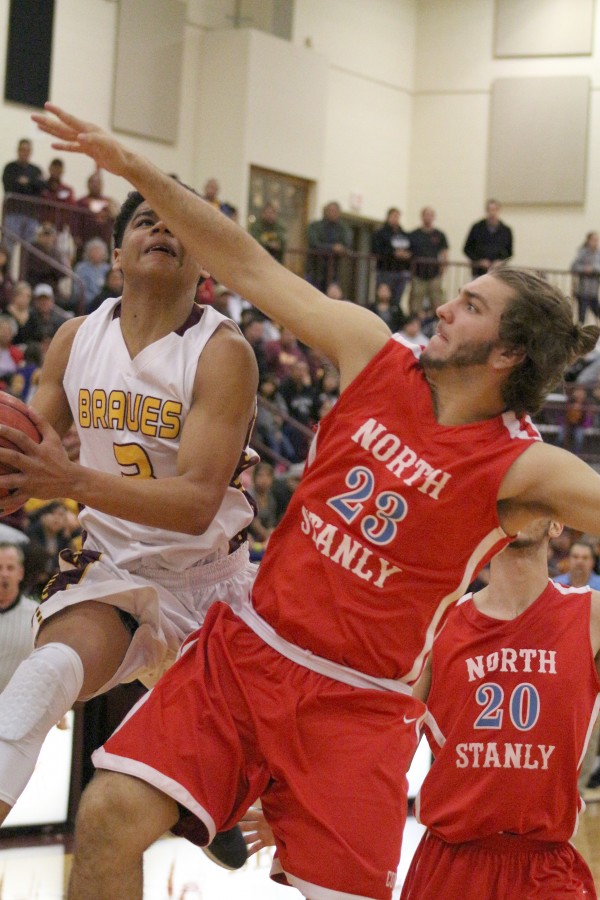 The Cherokee Braves (25-3) like to give their fans their money’s worth.  After trailing by as many as 17 points in the second period, the Braves came back in the second half to rise above the Comets of North Stanly by a score of 82-76 to win the Sectional Championship in the third round of the 1A state playoffs on Saturday, Feb. 27 at the Charles George Memorial Arena.

“We picked our intensity up at halftime,” Willis Tullos, Braves head coach, said after the emotional win.  “The kids were a little bit embarrassed by how they played in the first half.  I didn’t say much to them.  I just told them that it was up to them what we did, and they went out and did it.”

“The second half was the best half of basketball I’ve ever had a team play.”

When asked what were some of the keys of Cherokee’s success in the second half, Coach Tullos replied, “One of the main things that we did was stay under control.  We stayed in our defensive lanes a lot better, and we didn’t let them get those easy buckets on us.  We closed out on the three-point shot better.”

The Arena was packed for the game, and fans of both sides were loud the entire game – an atmosphere the Braves relish.  “This is what you live for, to play in a situation like this,” said Coach Tullos.  “My kids are tough – they’re tough mentally and they’re tough physically.”

Cherokee had four players in double digits including: Justus Day 27, Jason McMillan 18, Tye Mintz 15 and Holden Straughan 13.  Mintz grabbed 12 boards on the game, and also had a monstrous block at the end of the third period.  McMillan had 10 assists and 5 steals. 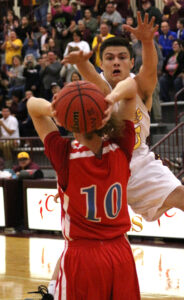 North Stanly got off to a fast start in this contest and took an early 5-0 lead after just 40 seconds.  Two minutes later, Cherokee had pulled to within three points (9-6).  After leading briefly at the three minute mark of the first, Cherokee trailed 18-17 at the 2:12 mark.  The Comets held a 23-20 lead after the first period.

The first few minutes of the second period were tight and North Stanly led 29-27 at the 5:48 mark.  The rest of the period was all Comets as they outscored Cherokee 17-2 to take a 46-29 lead into the locker room.

The Braves regrouped and came out for the third period on fire.  They hit three three-point shots and one short jumper in the first 85 seconds to cut the Comets lead to 46-42.  Less than a minute later, Mintz hit two free throws to tie the game at 46-46.  Two minutes later, Logan Teesateskie hit a free throw to give Cherokee its first lead of the game (52-51) with 3:53 left in the third.  The teams went into the fourth deadlocked at 57-57.

North Stanly regained the lead in the fourth and held it until the final two minutes.  The Comets led 74-73 at the 3:05 mark, and the Braves overtook the lead (76-74) with 2:02 left in the game.  North Stanly missed several field goals in the final minute and were forced to foul.

McMillan, Mintz and Steven Straughan knocked down key free throws, and the Braves held on for the 82-76 win to advance to the 1A West Regional Semifinals at Lincoln Charter on Tuesday, March 1.

Stats were not available for North Stanly.

To view or purchase photos from this game, visit: https://onefeather.smugmug.com/SPORTS/BASKETBALL/BRAVES-BASKETBALL-201516/Vs-North-Stanly-3rd-Round-1A/i-rBwsfGV