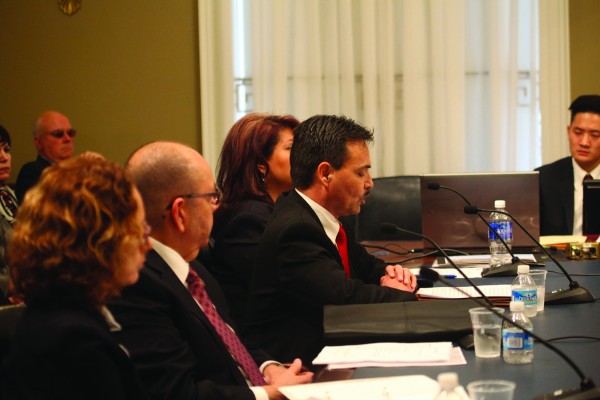 Principal Chief Patrick Lambert recently took his first official trip to Washington, DC as the leader of the Eastern Band of Cherokee Indians.  During his stay, he met with President Obama and other tribal leaders, testified on a Congressional Bill, met individually with several legislative leaders, and attended parts of the NCAI (National Congress of American Indian) Executive Council Winter Session.

“That was a head-of-state meeting,” said Chief Lambert.  “Before I even finished the first five months of my administration, I got to sit down with the leader of the free world.  I took that as a great honor.”

“It was a free-flowing discussion,” he noted stating that he discussed opening up a bridge in the Big Cove Community that is adjacent to the Great Smoky Mountains National Park so that there is no longer just one road in and out.

Chief Lambert also brought up the issue of EBCI tribal members gathering ramps in the Great Smoky Mountains National Park.  “I told him, since the Park opened up in 1932, we’ve always had an MOU (Memorandum of Understanding) and that MOU allowed our tribal members to go to the Park to gather ramps and any medicines, and then they ended that abruptly.”

A rule change known as “Proposed Regulation to Revise Certain Sections of 36 CFR Parts 1 and 2 to address ‘Gathering of Plants or Plant Parts by Federally Recognized Tribes for Traditional Purposes’” is currently being considered by the National Park Service.

Chief Lambert said he feels very confident it will pass as President Obama told a staff member to get the rule to the signature stage.  “I think we’re going to get that done now.  He (Obama) said, ‘this is a solvable problem. We can make that happen.’”

The next day, Chief Lambert gave testimony in a House Indian and Alaska Affairs Subcommittee hearing on Wednesday, Feb. 24 on House Bill 3599 which involves the federal government putting approximately 77 acres of land in Monroe County, Tenn. into trust for the Eastern Band of Cherokee Indians.  “I felt good about the total subject matter which is a great cause – restoring land that the Cherokees fought over for 100 plus years ago, and then fought over again in the seventies whenever they flooded the historic lands.  The topic is one of great interest to the Tribe, and one that I feel like is very important to the Tribe and our history.”

He said he was happy with the way the testimony went.  “I think the testimony was profound and spoke to the history of our people.  That land is sacred to us.  It’s taken a long time to get to where we are.”

Chief Lambert related that Congressman Don Young (R-Alaska), chairman of the House Indian, Insular and Alaska Native Affairs subcommittee, pledged his support of the bill and that House Democrats and Republicans are both coming together in support.  “It was very huge to hear direct, bi-partisan support…they made every indication that they’re going to get it pushed through the House, and then we’ll start work on the Senate side as well.”

Bi-partisan relationships are something that Chief Lambert said he feels is very important for the Tribe.  He said that campaign donations are something the Tribe does to help advance its agenda and get a foot in the door many times.  “I’m going to be very cautious of where those donations go.  They’re not going to be going simply to buy yourself a golf trip…it’s going to be for those friends of the Tribe that will help us advance our interests.”

He said a lobbyist of the Tribe submitted a list of donations last week that Chief Lambert felt were “lopsided” towards one political party so he disapproved the list and asked that a new, more bi-partisan list be created.  “We don’t have endless money so we have to make sure that the investments that we do make are strategic.  We can’t just go and willy-nilly throw money at somebody just because they send you an invite…there are more important things at home so we have to make sure that we make strategic decisions about who we get behind.”

Some of the topics Chief Lambert discussed with Rep. Meadows included housing, Crime Act funding, and internet gaming.  “He seems very interested in helping us protect the Tribe.  He is definitely a good friend of the Tribe.”

Chief Lambert said the kind of work he was able to do in Washington on this trip is vital to the continued success of the Tribe.  He said a resolution has been submitted for consideration in the Budget Council Session scheduled for Tuesday, March 1 that aims to place the Tribal Governmental Affairs line item into the Tribal Council’s budget from the Executive Office’s budget.

Chief Lambert said he is vehemently opposed to this.  “This fund is used to contribute to friends of the Tribe to advance our agenda in the interests of the people.  There is a current resolution to take that and put it under the Tribal Council.  The Principal Chief is the top elected leader of the Tribe.  I will fight to keep that as a tool that the administration uses to advance the overall interest of the Tribe, not advance the interest of someone going to Martha’s Vineyard to play golf.”

He said the fund is only going to be used for official purposes in his administration.  “I take my work here very seriously, and the Governmental Affairs piece of it is something that I would utilize to advance the interest of the Tribe and not self-interests of any particular individual.”

To view the full text of Chief Lambert’s testimony on Wednesday, visit: https://www.theonefeather.com/2016/02/testimony-of-chief-lambert-on-lands-reacquisition-act-bill/