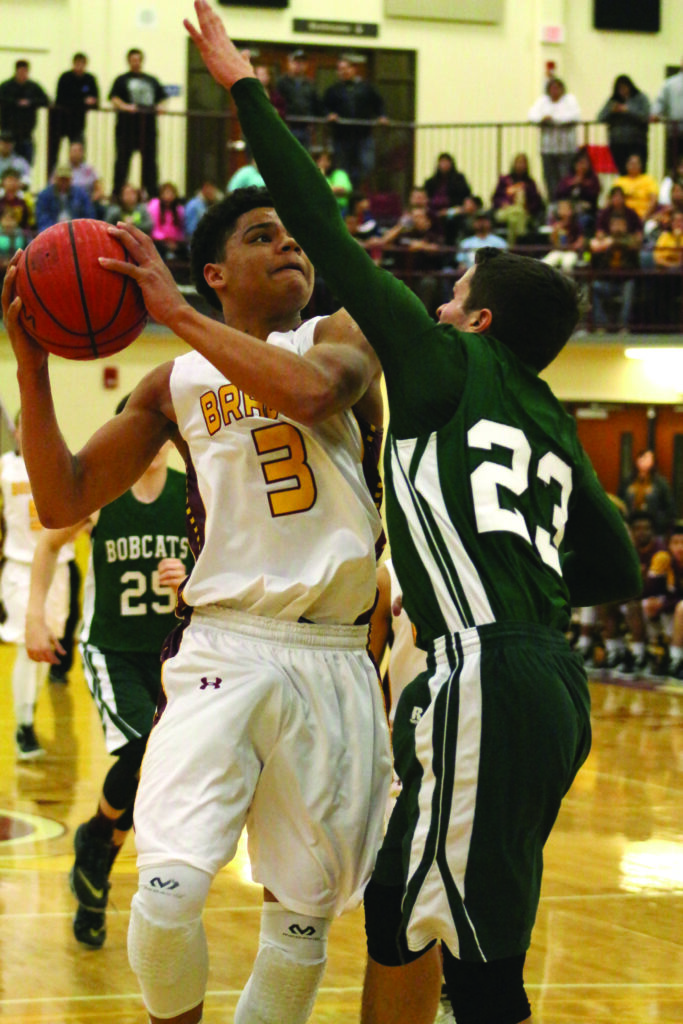 The Cherokee Braves (24-3) came within one point of doubling Blue Ridge (10-14) in a 1A state playoff second round matchup on Thursday, Feb. 25 at the Charles George Memorial Arena.  Cherokee held the Bobcats to two periods of single-digit scoring as they topped Blue Ridge 85-43.

Justus Day, sophomore forward, led the Braves with 25 points, 3 rebounds and 4 steals.  He was followed by Jason McMillan, senior point guard, with 19 pts, 3 assists, 4 reb and 8 steals.  On a side note, Day had a monstrous dunk in the third period, a rarity in high school basketball.

“I thought they played well,” said Willis Tullos, Braves head coach.  “We didn’t play with quite as much intensity as you’d want to, but we’d already beaten them bad twice, and it’s hard to do that.  Given the circumstances, they played well.” 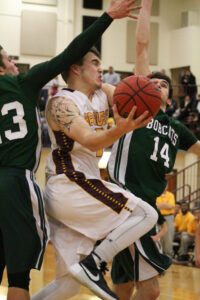 The first few minutes of the game were tight, and the two teams were tied at 3-3 at the 6:09 mark of the first period.  In the next three minutes, the Braves outscored the Bobcats 8-4 to lead 11-7 with just over three minutes left in the first.

Cherokee went on an 11-2 run in the remaining minutes of the first, and McMillan drove the lane for a layup at the buzzer to make it 22-9 in favor of the Braves.

Again, the first few minutes of the second period were close and Cherokee led 26-14 two minutes in.  At the 3:21 mark, the Braves had extended their lead to 35-18, and they would go on to outscore Blue Ridge 14-5 for the rest of the period.  McMillan gave the crowd something to cheer for again as he stole an inbounds pass from Blue Ridge, stormed down the court, pulled up and hit a three at the buzzer to give the Braves a 49-23 lead at the half.

Cherokee came out blazing in the third and went on an 8-2 run early to take a 57-25 lead at the 6:26 mark.  A few seconds later, Day got a steal and stormed down the middle of the lane for his dunk after which the entire Arena exploded.

Blue Ridge was led by Ben Riddle with 26 pts followed by Dylan McCall with 10.

To view or purchase photos from this game, visit: https://onefeather.smugmug.com/SPORTS/BASKETBALL/BRAVES-BASKETBALL-201516/Vs-Blue-Ridge-2nd-Round-1A/