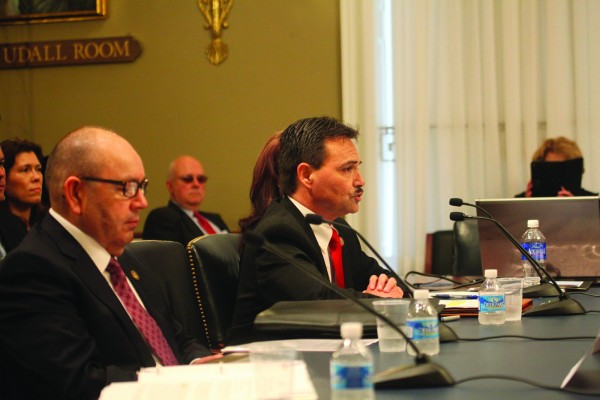 Note: This is the full testimony of Principal Chief Patrick Lambert given before the House Indian and Alaska Affairs Subcommittee on Wednesday, Feb. 24 during a hearing on “The Eastern Band Cherokee Historic Lands Reacquisition Act (H.R. 3599)”.

WASHINGTON – Chairman Young and Ranking Democrat Ruiz, I appreciate the opportunity to provide this testimony of behalf of the Eastern Band of Cherokee Indians. I want to first thank this Committee for holding a hearing on this bill and express my particular appreciation to Congressman Chuck Fleischmann, our friend from Tennessee, who introduced this bill and has championed it. I also want to thank our Representative, Mark Meadows, for his friendship, respect for the Eastern Band, and strong support for this bill.

The Eastern Band of Cherokee Indians is a Tribal Nation recognized by the United States as a sovereign with inherent rights of self-government, like the several states and foreign nations. The place of the Cherokee People within the history of the United States is often told, but usually as though we are a People of the past. Our true story is one of thriving, survival, and thriving again. Before the U.S. Army forcibly removed Cherokee People along the Trail of Tears, the unified Cherokee Nation governed and occupied lands that covered several states that now include our Reservation in Western North Carolina and the State of Tennessee. The Eastern Band of Cherokee is compromised of the 15,000 or so descendants of the Cherokees who avoided forced removal on the Trail of Tears, or returned home from the Indian Territory after surviving the removal and returning to their aboriginal homelands. 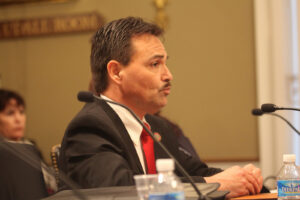 Today, we come to tell the story of why the Eastern Band reacquiring a small part of our historical lands in Tennessee is important, and why this Committee should affirm and celebrate the return of these lands to the Cherokee. This bill would return about 76 acres of land back to us, key historic sites that fell out of our ownership in harder days. The legislation also would grant two permanent easements over TVA property to be held in trust for the Tribe for the purpose of creating recreational trails between the sites. These properties commemorate and interpret historic persons, towns, and the culture of the Cherokee during the period from the early 1700s through 1840, and are also associated with and interpret the Trail of Tears. The properties are located in Monroe County, Tennessee, near the town of Vonore and are adjacent to Tellico Lake, the reservoir behind TVA’s Tellico Dam. This bill celebrates not only a time period in Cherokee history when we lived in Tennessee but also the return of the Cherokee People – as a modern, living People, with a living culture and language, and traditions that have survived from ancient times – back to Tennessee.

Like our relationship with the United States, relations between the Cherokee People and the State of Tennessee have not always been harmonious. Our historic relationship with Tennessee has been a troubled one, marked by Cherokee governance, conflict, broken promises, and accommodation for Cherokee survival. When President Andrew Jackson, who our Cherokee people had fought side-by-side with in the War of Independence, decided that we were lesser people that should not have rights to our lands in the Southeast, we moved our base of government from what is now Georgia right across the state line into what is now Tennessee. Soon after, we were forced to leave these lands. The Eastern Band Cherokees, we found refuge from forced removal in the Great Smoky Mountains that we continue to call home today. Through all of this, the Cherokee people have persevered and even flourished.

This legislation marks a new era of respect and appreciation between the Cherokee People, the United States, and the State of Tennessee. We welcome the new era of relations, and promise to continue to work together to improve our respective sovereigns as friends and neighbors.

On a final note, a little over 13 years ago, my friend and mentor, Principal Chief Leon Jones of the Eastern Band, testified before the House Natural Resources Committee in support of legislation that would complete a land exchange between the Eastern Band and the National Park Service, which allowed the Eastern Band to reacquire about 218 acres of our aboriginal homeland adjacent to our reservation. Chief Jones promised that the Eastern Band would build on those lands desperately-needed new schools for our children that would celebrate both Cherokee traditional culture and a culture of education and learning.

Chief Jones kept his promise. Today, our Cherokee Tribal Schools sit on those lands we reacquired 13 years ago. The schools are a monument to Cherokee culture and our commitment to our children’s education. With that law, Congress established a modern precedent for returning lands back into trust for the Eastern Band of Cherokee Indians. Also with that law, the Eastern Band set a precedent for keeping its promises and demonstrating what an Indian Nation can do to better its community and society at large when the Congress provides the tools for Cherokee self-determination to work. I believe this bill is another such opportunity.

Thank you for the honor of the opportunity to testify in support of this important bill.