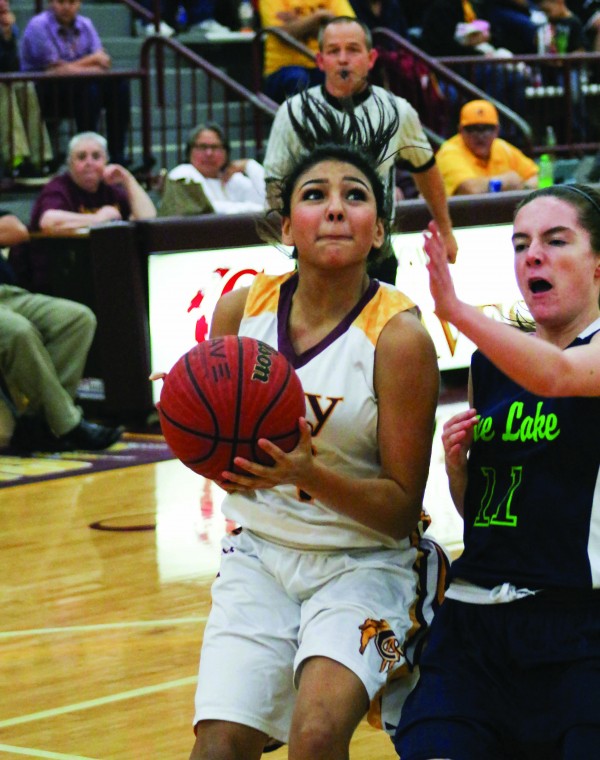 Cherokee’s Karla Wolfe (#4) goes for a layup around Pine Lake Prep’s Avery Bain (#11) during the first round of the 1A state playoffs on Tuesday, Feb. 23 at the Charles George Memorial Arena. Wolfe finished the game with 9 points. (SCOTT MCKIE B.P./One Feather photos)

The Lady Braves (21-4) held Pine Lake Prep (11-14) to single digit scoring numbers in each of the four periods in their 1A state playoff first round match-up on Tuesday, Feb. 23 at the Charles George Memorial Arena.  Cherokee had three players in double digits as they beat the Pride 76-30 to advance to the second round.

The Lady Braves were led by Tori Teesateskie, freshman guard, with 17 points followed by Shelby Wolfe 16 and Pooh King 14.

“One of the pleasures of being a higher seeds is that you get to play a team that didn’t have that great of a season,” said Chris Mintz, Lady Braves head coach.  “I thought we did some things well.  We jumped out on them pretty early, and we were able to kind of cruise to the end.”

Mintz said ball control was a big factor in the game.  “We knew they were struggling handling the ball so we tried to put a lot of pressure on them and made them turn the ball over and get some easy baskets.” 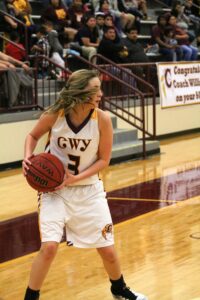 Tori Teesateskie, Lady Braves freshman guard, prepares to pass the ball inside during the first half of Tuesday’s game. She led Cherokee with 17 points on the night.

At the 6:05 mark of the third, Teesateskie hit two free throws to give the Lady Braves a 40-point (57-17) lead thereby invoking the NCHSAA mercy rule.  Cherokee led 59-24 at the end of the third.

With the clock running, the fourth flew by.  Cherokee outscored Pine Lake 17-6 in the final eight minutes to take the 76-30 victory.

To view or purchase photos from this game, visit: https://onefeather.smugmug.com/SPORTS/BASKETBALL/LADY-BRAVES-BASKETBALL-201516/Vs-Pine-Lake-Prep-First-Round/