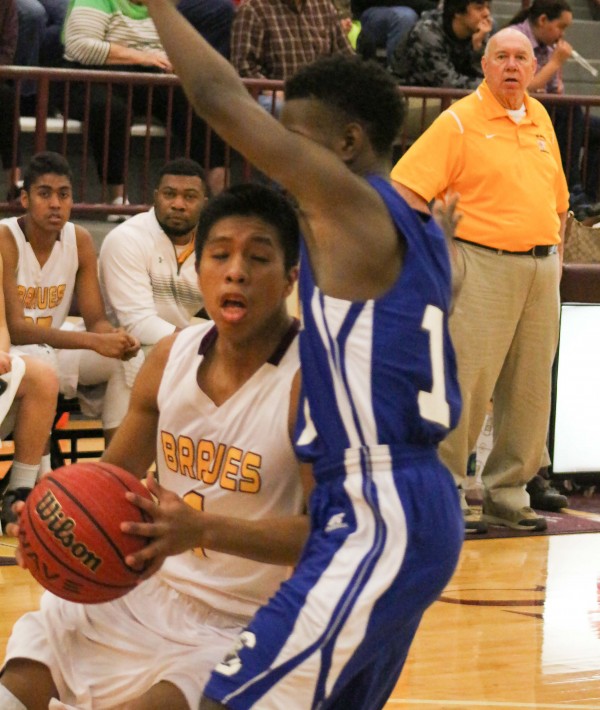 It was a night to remember for Cherokee as their coach was honored, one of their players hit a milestone scoring mark, and the team set a state record.  And, they won a playoff game.

For the ninth time this season, Cherokee (23-3) broke the 100 mark as they defeated the Cherryville Ironmen (10-16) by a score of 108-93 in the first round of the 1A state playoffs on Tuesday, Feb. 23 at the Charles George Memorial Arena.

Prior to the game, Willis Tullos, Braves head coach, was honored with a basketball in recognition of his 600th career coaching victory that he garnered earlier in the season.

Jason McMillan, Braves senior point guard, needed 20 points on the night to break the 1,000 mark for his career.  He hit that mark in the third period as he drove the lane for a layup.  McMillan finished the game with 27 points, 2 assists, 2 rebounds and 6 steals.

Going into the game, Cherokee needed five three-pointers to break the state record (283) for most made by a team in a season – a mark set by East Carteret in 2014.  They hit that mark easily in the first half and kept going making 15 of 41 (37 percent) from three-point land to set the new state record at 294 and counting. 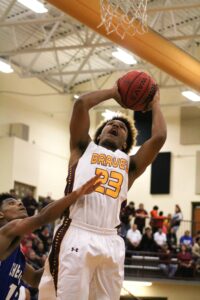 Cherokee’s Isaiah Evans (#23) goes for a shot inside over Cherryville’s Christian Jones (#15). Evans had 2 points, 1 rebound and a 1 steal in the game.

He commented on their state record, “The three-point has been a good shot for us.  We shoot a better percentage on three-point shots than we do on lay-ups…so, it’s been a really important part of our offense.  We need to be proud of our three-point shooting, but we need to improve in other areas.”

Coach Tullos said he was disappointed in the play he got on Tuesday from the bench.  “They let a 30-point lead come down to 15 points.  That’s inexcusable. There’s no way you can justify that.” 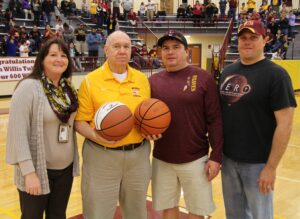 The game itself started out fairly even and the Ironmen took an early lead and led 6-4 just a few minutes in.  Cherokee grabbed its first lead at the 4:53 mark and wouldn’t relinquish it again.  By the end of the first, the Braves had built their lead to 14 points (32-18).

The first four minutes of the second period were almost a dead heat and Cherokee led 47-32 at the halfway point.  For the next minute, the Ironmen went on a short 6-2 run to make it 49-38 at the 2:42 mark, but then Cherokee blasted the ball for the remainder of the half to take a 20-point lead (64-44) into the locker room.

The third period was almost even with Cherokee edging Cherryville by two (27-25) to take a 91-69 lead into the final eight minutes.

The Ironmen outscored the Braves 24-17 in the fourth, but Cherokee was able to hold on for the 108-93 victory and advance to the second round.

Cherryville was led by Christian Jones with 21 points followed by Landon Hudson 18, and Jaiden Hunt 15.

To view or purchase photos from this game, visit: https://onefeather.smugmug.com/SPORTS/BASKETBALL/BRAVES-BASKETBALL-201516/Vs-Cherryville-First-Round-1A/