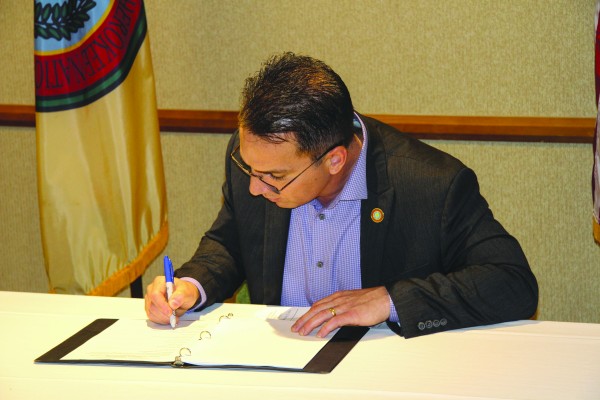 The Eastern Band of Cherokee Indians entered into a multi-agency agreement on Tuesday, Feb. 23 to help save the sicklefin redhorse (Moxostoma sp.).  According to information from the U.S. Fish and Wildlife Service (USFW), the sicklefin is found in only six Appalachian counties in the Hiwassee River system and the Little Tennessee River system.

“Oftentimes, when faced with environmental and natural resource management issues, action is oftentimes reactive or even compelled,” Vice Chief Sneed commented during Tuesday’s event which was held at Harrah’s Cherokee Casino Resort.  “The signing of this agreement today demonstrates the power of proactive collaboration between our Tribal government, government agencies, conservation groups and the private sector.  I would like to thank everyone who has had a hand in bringing this agreement to fruition.” 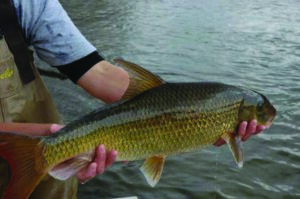 He added, “And, I believe that the example set today will help establish a new standard by which environmental issues can be addressed in the future.”

According to the USFW, the sicklefin redhorse is found in Jackson, Macon, Swain, Clay and Cherokee counties in North Carolina and Towns County in Georgia.

Each agency signing the CCA on Tuesday agreed to certain actions it will take.  The Eastern Band of Cherokee Indians agreed to the following per the agreement:

Mike Oetker, U.S. Fish and Wildlife Service deputy regional director for the southeast region, said, “As we have looked across the country, oftentimes, our agency, the U.S. Fish and Wildlife Service, has worked very closely with state agencies, but this one is expanded to include the Tribe as well as private industry making it a very unique partnership and one that I think can serve as a model for the country and nation to look at in how to do conservation in the 21st Century.”

Russell Townsend, EBCI historic preservation officer, said that Cherokee people have inhabited this area for thousands and thousands of years with water and fish being constants throughout history.  “From the archaeological record, we know that these rivers have been vitally important to our people.  You go where the water is.”

He said it is interesting to note the relationship of historic Cherokee settlements to fish weirs.  “They always had a fish weir right near the village, and we find villages that are relatively newly established in 1200 and 1300 being built next to a 5,000-year-old fish weir.  So, it’s cool these places are being reused, and they were using the river resources.”

Townsend concluded by commenting, “The redhorse is a neat species because it was used for medicine as well…for hundreds and hundreds of years, the Cherokee understood that you get respiratory sicknesses from water-borne insects.  They knew that without microscopes.  They knew that correlation was there, and they used the redhorse to treat that.” 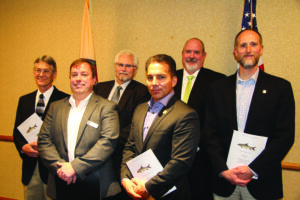 Steve Jester, Duke Energy vice president of water strategy, hydro licensing, and lake services, commented on the agreement, “This is another example of when I think we’re going to have far, far better results from working as a team to do some very important work.”

He said his company is very excited about the partnerships forged with the agreement.  “I have a really confident feeling that we’re going to produce some positive, and more importantly, lasting results.”

“By signing this agreement today, we are committing ourselves to addressing those needs.  In addition, this partnership between state, tribal, federal and private organizations helps leverage our resources to provide adaptive management and hopefully preclude the need to list this species under the Endangered Species Act.”

The conclusion of the CCA states that if the sicklefin redhorse does become listed as threatened or endangered, “…the Parties will be encouraged to participate in recovery planning…”

The USFS lists the following as threats to the sicklefin: “hydroelectric operations which fragment habitat and isolate surviving populations; erosion from poorly-managed land disturbance activities, leading to silt-covered stream bottoms; pollution from run-off and discharge from industrial, municipal, agricultural, and other sources; stream changes from straightening streams, dredging, and in-stream mining; and predation and habitat impacts by non-native animals.”