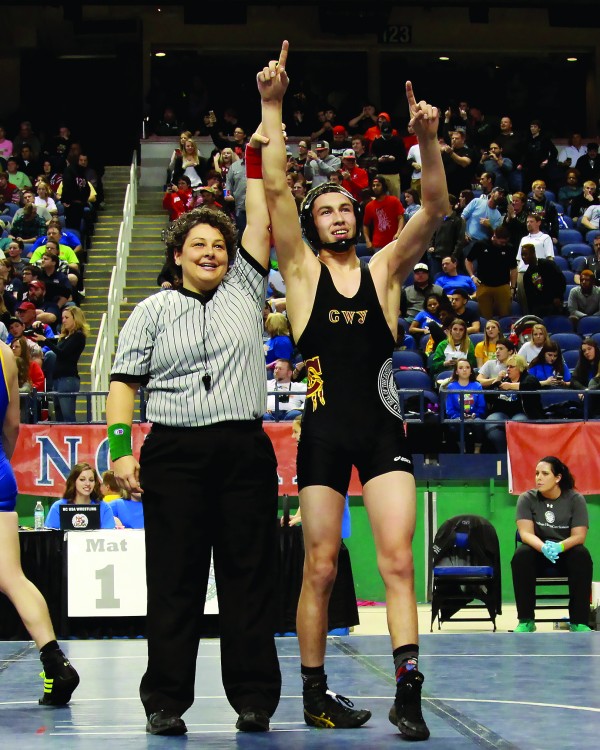 The referee raises Anthony Toineeta’s hand for the victory immediately after he won the 1A state championship in the 145lb division over Princeton’s Michael Daughtry on Saturday, Feb. 20. (AMBLE SMOKER/One Feather photos)

GREENSBORO – Cherokee’s Anthony Toineeta (33-4) defeated Princeton’s Michael Daughtry (44-7) in the final round of the State Finals to become the 2016 NCHSAA 1A 145lbs state champion on Saturday, Feb. 20 at the Greensboro Coliseum.  Toineeta defeated Pamlico’s Jorge Valadez in the quarterfinals and Tarboro’s Quadarrius Hopkins in the semifinals on his path to the State Title.

“Anthony fought hard and listened to the game plan,” said Tavi Rivera, Braves head wrestling coach.  “I’m excited to see what the (upcoming) years have to offer.  Cherokee has always been known for their athletes and how they work.  They have a really good work ethic, and I’m just excited to see.  Hopefully, next year we’ll bring more than just one.” 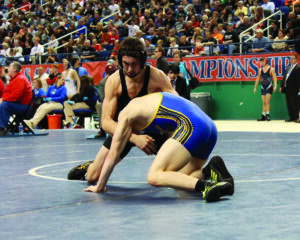 Toineeta (top) works hard against Daughtry in the final match.

After the match, Toineeta exclaimed, “I feel great, and I’m super excited.  I feel like I accomplished what I wanted to this year by winning state.  I wanted to win, get the first takedown, and dominate the match.”

Toineeta controlled the majority of the match during the final round and only gave up points due to judgement calls by the officials.  Throughout the match, Princeton’s Daughtry only had control for two seconds during the opening of the final round.

The match began with Toineeta and Daughtry circling off each other through the first minute of the opening round when Toineeta found an opening a scored a 2-point takedown at the 1-minute mark.  Toineeta took control of the top position until a stalemate was called at 1:16.  Toineeta continued in the top position until 1:57 when he was called for stalling.  Daughtry attempted an escape in the final 3 seconds, but Toineeta held on to end the round 2-0.

Toineeta began the final round in the bottom position but found his feet within two seconds to score a 1-point escape.  Neither wrestler was able to take control of the match through the first minute as both wrestlers locked up at various intervals.  After being pushed out of the circle at 5:02, Toineeta was penalized a third time for stalling and Daughtry awarded one point to bring the score to 3-2.  Both wrestlers locked up again in the neutral position and fought to gain control until Toineeta hooked Daughtry’s leg and scored a takedown worth 2-points to bring the score to 5-2 at the 5:37 mark.  As the final seconds were waning down and Toineeta unable to get a turn as Daughtry locked up his arms, the official charged Toineeta with stalling for a fourth time at 5:55 to award Daughtry 2-points and bring the score to 5-4.  Daughtry attempted one last escape, but Toineeta out-muscled him to regain control and went on to win the match.

With the victory, Toineeta is the fourth wrestler in Cherokee High School history to win a State Title.

To view or purchase photos from this meet, visit: https://onefeather.smugmug.com/SPORTS/WRESTLING/1A-State-Meet-in-Greensboro/ 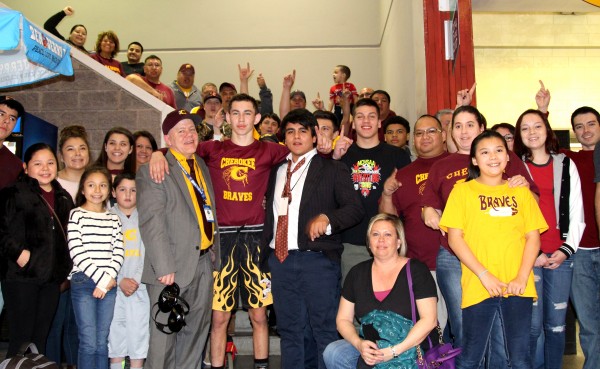