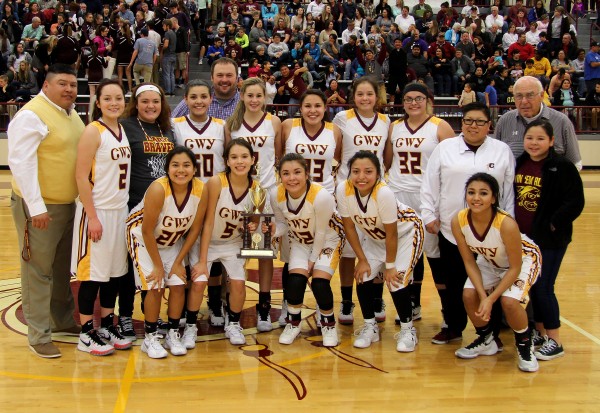 When you can win the conference tournament title and give your head coach a milestone win at the same time, it’s a good day.  That’s exactly what Cherokee (20-4) did on Friday, Feb. 19 at the Charles George Memorial Arena as the Lady Braves defeated Swain County (12-14) by a score of 61-40 to win the Big Smoky Mountain Conference tournament giving Head Coach Chris Mintz his 300th career win.

“It was a great environment,” Mintz said after the game.  “There were a ton of people here.  Our girls played a little tight early.  Once they relaxed and just played, I feel that was the difference in the game. We started making some shots.”

Mintz said he made a few halftime adjustments.  “When went in there at halftime and told them, ‘you’re playing hard, you’re just playing tight’, and once we calmed down a little bit and started making shots, then it became easy for us.”

The Arena was packed to the brim for the game, and Coach Mintz said it was good for his team as it simulated a playoff-type environment, and he feels they handled the pressure well.  “Those girls are just improving every time.  It was a great experience for them to get in there and play in that.”

He went on to say, “I’ve been blessed to coach some great kids.” 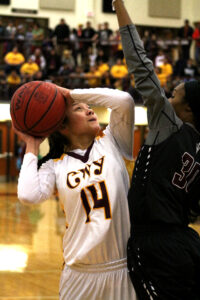 Timiyah Brown, Lady Braves sophomore forward, drilled a three-pointer from the corner 35 seconds later to put Cherokee back on top.  Then, Jamie Lossiah, freshman point guard, and Brown both knocked down two free throws in the next minute to give Cherokee a 12-6 lead with just over a minute left in the period.

The Lady Braves went on to lead 12-8 after one.

Swain came out in the second period and went on an 11-2 run to lead 19-14 with 4:58 left in the half.  They led 23-19 with 99 seconds left before halftime.  Pooh King, Lady Braves junior point guard, and Tori Teesateskie, freshman guard, both made two free throws to even the game at 23-23 with 38 seconds left.

The Lady Braves got two more buckets before the half.  Bree Jumper, senior forward, hit a short jump shot from just inside the free throw line, and then Teesateskie hit an inside shot with 3.5 seconds left to give Cherokee a 29-23 lead at the half.

Following Coach Mintz’s halftime advice, the Lady Braves settled into their game and went on a 6-0 run in the first two minutes to lead 35-23.  Midway through the third, Cherokee led 41-27, and they ended up leading by 17 points (45-28) at the end of the period.

The fourth period was closer with Cherokee outscoring Swain 16-12, but the lead was too much and the Lady Braves took the game 61-40 and the championship trophy.

To view or purchase photos from this game, visit: https://onefeather.smugmug.com/SPORTS/BASKETBALL/LADY-BRAVES-BASKETBALL-201516/Vs-Swain-SMC-finals-February/i-sPKJxpX 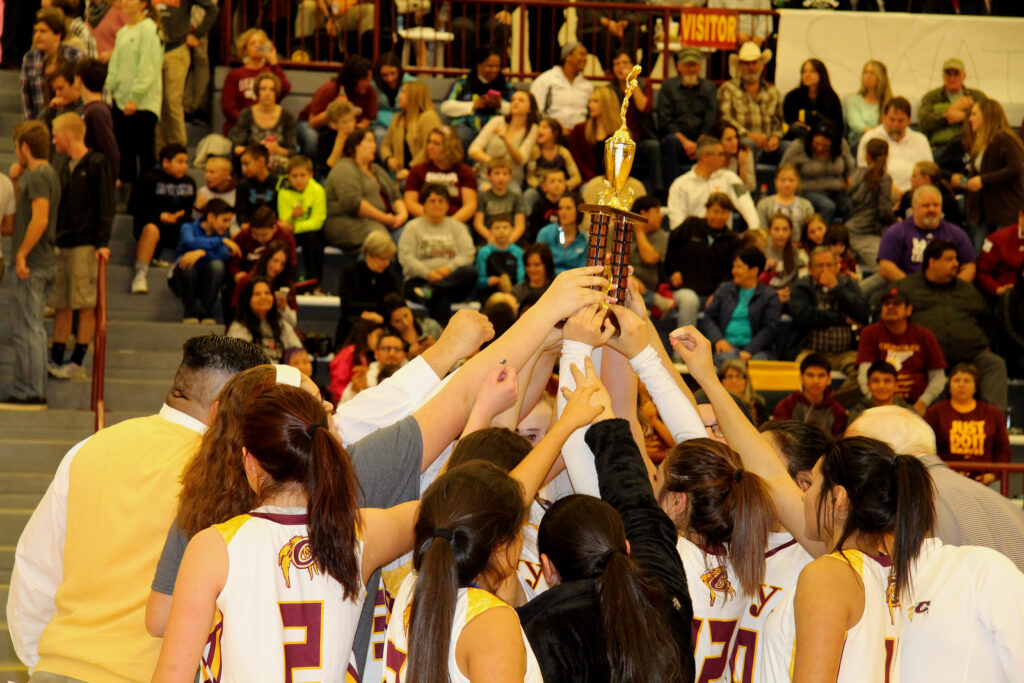