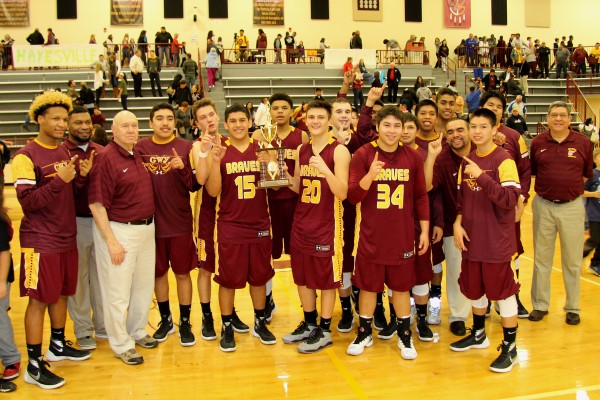 Cherokee (22-3) and Hayesville (21-5) were due for a showdown.  Each team had won a game against the other during the regular season, and the two shared the Big Smoky Mountain Conference regular season title.  That showdown took place in the finals of the conference tournament on Friday, Feb. 19 at the Charles George Arena, and the Braves came out on top 102-96.

The Arena was absolutely packed.  It was loud.  The feeling in the air was electric, and Willis Tullos, Braves head coach, was happy with his team’s performance.

“Toward the end, we had some rough moments, but we got it steady and held on to win, and that’s all that matters,” he said after the emotional game.  “At this time of the year, you want to win and advance, that’s all you want to do.”

“Our guys are pretty tough,” Coach Tullos commented.  “They’ve got a lot of heart, and they wanted this really, really bad.  It’s been a long time coming.” 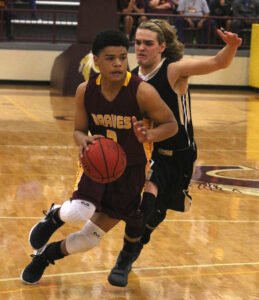 Both teams traded baskets early in this one, and Hayesville led 8-5 two minutes in.  Cherokee grabbed the lead (14-12) a minute later and led 19-16 with three minutes left in the first.  McMillan hit three-pointers on two consecutive trips down the court at around the two minute mark to put Cherokee up by 12 points (30-18), and they led 33-20 at the end of the first.

The second period was a dead heat with both teams scoring 22 points.

Hayesville pulled to within 5 points (41-36) at the 3:44 mark of the period, but Cherokee extended their lead back to 9 with two minutes left.

With five seconds left before the half, Cory Junaluska, Braves junior center, drove the lane for two points.  Day stole the ensuing inbounds pass and quickly put it in for another two points.  He was fouled on the shot, made his foul shot for the traditional three-point play, and the Braves led 55-42 at the half.

They got to within three (99-96), but Cherokee hit some free throws late and ended up taking the 102-96 win and the championship trophy.

To view or purchase photos from this game, visit: https://onefeather.smugmug.com/SPORTS/BASKETBALL/BRAVES-BASKETBALL-201516/Vs-Hayesville-SMC-finals/i-b7zGdwN 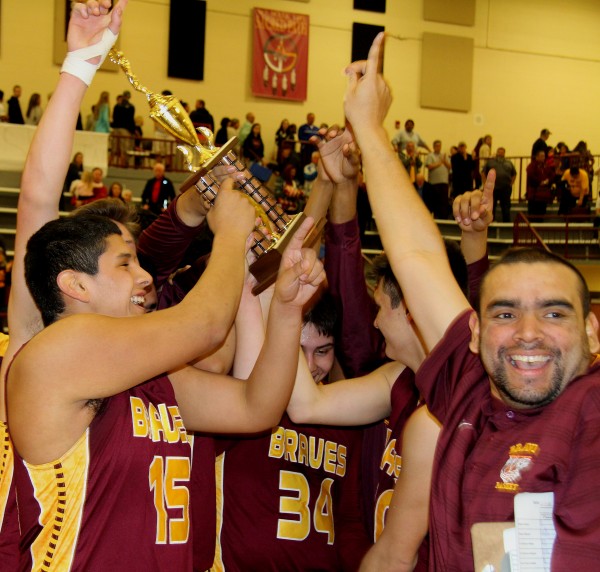