Si-yo, this New Year is going by pretty fast.  January is already gone and we are half way through the month of February.  I would like to give everyone an update on what I have been involved in since January started.

The month of January was pretty calm. I only had one event that I took part in and it was on Jan. 30.  Nikki Crisp invited me to take part in the 3rd Annual Women’s Day Celebration.  It was an honor to have been asked to open up the celebration with prayer, and I also shared a few comments regarding this event.  I enjoyed listening to all of the guest speakers and taking part in the activities that they had at the celebration.  It was good to share about the women that had an influence on me throughout my life. It was also great to listen to other women at the event share their stories. 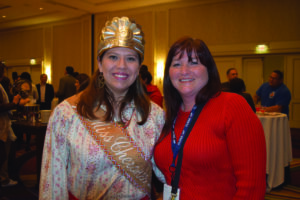 The second week in February, I had the honor of attending USET (United South & Eastern Tribes) Impact Week, which ran Feb. 7-11, along with some of our Tribal Council representatives.

On Monday, Feb. 8, I attended a meeting with our Tribal Council and the National Park Service.  I was honored to have been able to take part in this meeting because the topic of discussion was something that my great grandmother Amanda Swimmer has been fighting for.  I would like to thank the Tribal Council for allowing me to attend the meeting with them and to participate in the discussion.  I felt like the meeting went very well. That same evening, I attended a reception for all attendees and the Close-Up group.  We had a group of students from Cherokee High School who were there participating in Close-Up.  The reception was very nice, and I met a lot of people from different tribes.

On Tuesday, Feb. 9, Tribal Council invited me to meet them for lunch at the National Museum of the American Indian and to also take a tour at the museum.  After the tour, Tribal Council and I had a group picture from the terrace of the museum with the background being the Capitol Building.  It was very cold and windy that day, but the view was amazing.  After the tour, I was able to meet another worker from the museum and his name was Dennis Zotigh.  Dennis does demonstrations throughout the day at the museum but had time to speak with me a little before I left the museum.  The rest of the day was spent interacting with Close-Up. Tuesday evening I attended the Capitol reception where I met Brian Patterson, USET president, and the 2016 Coushatta Princess Sophia Faith John.  I also met Council members from other tribes and a few congressmen that attended the reception.

On Wednesday, Feb. 10, I spent the morning exploring Washington monuments and other attractions at the National Mall.  I had a wonderful time in Washington and would like to thank Big Cove Rep. Richard French, Wolfetown Rep. Bo Crowe, Tribal Council Chairman Bill Taylor, Birdtown Rep. Travis Smith, Birdtown Rep. Albert Rose, Painttown Rep. Marie Junaluska, Yellowhill Rep. Anita Lossiah, Vice Chairman Brandon Jones, Cherokee County – Snowbird Rep. Adam Wachacha, and Wilson Pipestem for including me in some of their meetings and luncheons. They made me feel very welcome and kept it fun.

This experience was an awesome one and I am so thankful that I was able to take part in it.  I look forward to what the future holds.