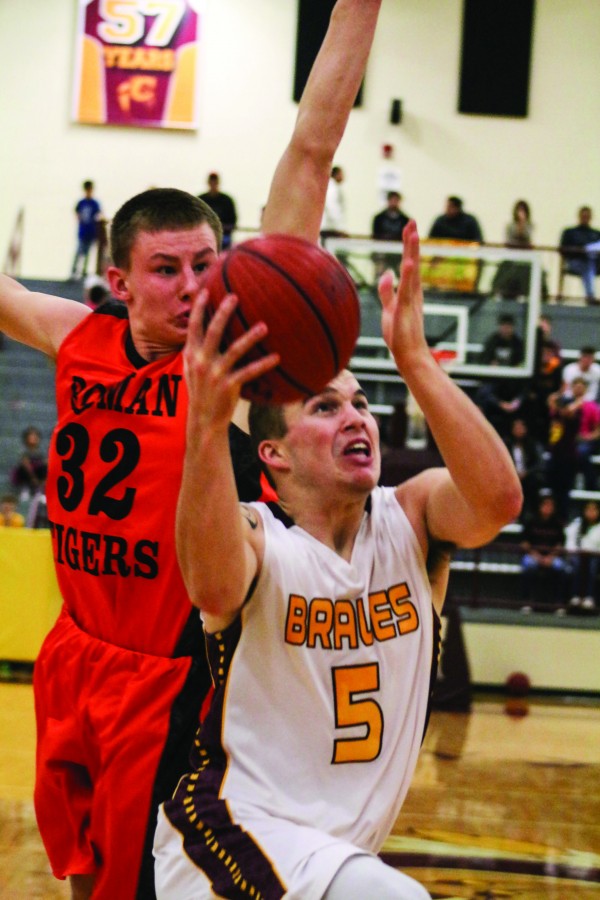 To borrow a phrase from sportscaster Dan Patrick, Cherokee’s Tye Mintz, sophomore forward, was “en fuego” on Tuesday night.  Mintz scored 34 points and grabbed a whopping 17 rebounds to lead Cherokee (21-3) to a 102-91 win over Rosman (16-9) in the semifinals of the Big Smoky Mountain Conference tournament at home.

“Well, we can’t shoot free throws, and we can’t stop dribble penetration,” said Willis Tullos, Braves head coach.  “That’s two big problems.  We didn’t do any one of those things tonight.  We did some good things, but we just didn’t play well overall.”

With the win, the Braves advance to the tournament finals against Hayesville on Friday, Feb. 19 at 8pm at the Charles George Memorial Arena.  Cherokee and Hayesville shared the Big Smoky Mountain Conference regular season title and split games in the season. 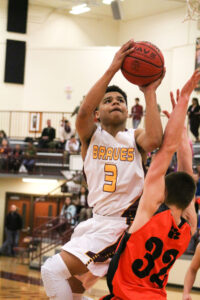 Coach Tullos said his team is going to concentrate on defense in the upcoming final.  “We’re going to try to play some defense and stop somebody.”

He said Hayesville is a much better team than they faced on Tuesday night.  “Rosman has the shooters, but Hayesville has it all.  So, we’ve got to try to play some defense.”

Rosman came out firing and took a 7-0 lead not even two minutes in.  The Tigers led 17-9 with just under three minutes left in the first period, and then Cherokee came roaring back.  The Braves went on a 9-2 run in the last two minutes of the period, and McMillan drilled a three-pointer at the buzzer to give Cherokee its first lead of the game at 21-19.

In the first three minutes of the second, Cherokee outscored Rosman 16-11, and the Braves led by as many as nine points at one time.  But, just like Cherokee did in the first, Rosman came roaring back and tied the game at 44-44 with 1:31 left before the half.  The Braves ended up taking a 49-46 lead into the locker room.

The second half was tight as well with Cherokee outscoring Rosman by four points in each of the two periods.  The Braves lead by three points for most of the third and extended that to seven (73-66) as the period came to a close.

Cherokee came out blazing in the first few minutes of the fourth and led by as many as 16 points.  But, again Rosman came back and made it close.  With 3:10 left in the game, Cherokee’s lead had been cut to five (90-85).  The next few minutes were dominated by defense as Cherokee only scored six points while holding Rosman to none to lead 96-85 with just over a minute left in the game.

Both teams scored six points in the final minute as Cherokee won the game 102-91.

To view or purchase photos from this game, visit: https://onefeather.smugmug.com/SPORTS/BASKETBALL/BRAVES-BASKETBALL-201516/Vs-Rosman-SMC-semis-February/i-8Gvxbhp