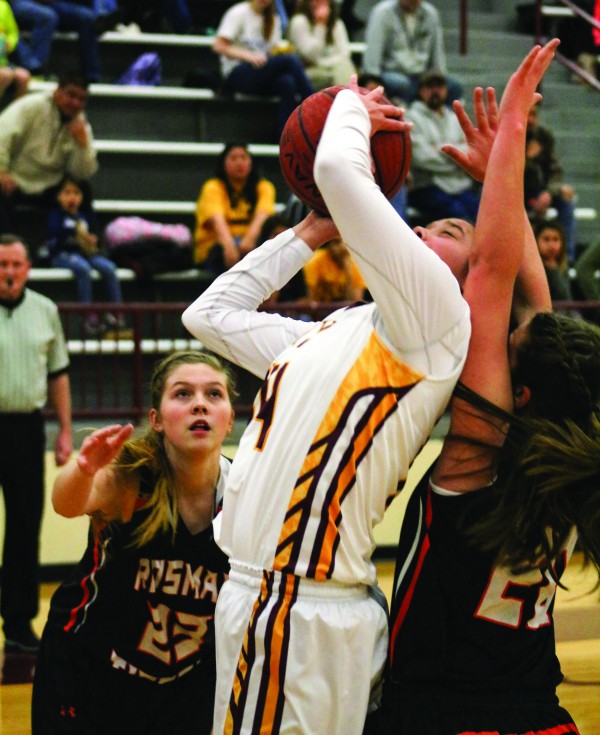 The Cherokee Lady Braves (19-4) spread the ball around well as they advanced to the finals of the Big Smoky Mountain Conference with a 77-46 win over Rosman (14-10) on Tuesday, Feb. 16 at the Charles George Memorial Arena.  Pooh King, Lady Braves junior point guard, led Cherokee with 17 points followed by Timiyah Brown 14, Bree Stamper 13 and Shelby Wolfe 13.

“I didn’t think we played great,” said Chris Mintz, Lady Braves head coach, “but, we got things done and we scored during our stretches when I didn’t think we were playing very good.  In the second half, we came out and imposed our will on them and did a really good job of just blowing it out right there.”

With the win, the Lady Braves advance to the finals where they are set to meet the Swain County Lady Maroon Devils on Friday, Feb. 19 at 6:30pm.  “It’s going to be a great game,” said Coach Mintz.  “It’s a great rivalry.  It should be a great environment.  A lot of people should be here so it should be fun.” 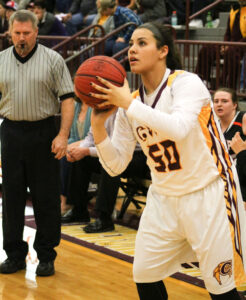 Cherokee’s Timiyah Brown (#50), sophomore forward, lines up for a three-point shot in the first half of Tuesday’s game. She finished with 14 points.

Cherokee jumped out to an early 4-0 lead in Tuesday’s game, but Rosman came back and tied the game at 6-6 midway through the first period.  Both teams traded baskets for the next two minutes, and Cherokee led 18-15 with one minute left in the first.  Brown and Stamper both drilled three-pointers in the final 60 seconds to put Cherokee up 24-15 after one.

As Coach Mintz said, Cherokee came out blazing in the third period and outscored Rosman 14-4 in the first three minutes to lead 54-26.  The Lady Tigers got some offense going and outscored Cherokee 10-6 for the rest of the third, and the Lady Braves led 60-36 going into the fourth.

Cherokee came out gunning again in the first few minutes of the fourth outscoring Rosman 10-2 in the first three minutes to lead 70-38.  From that point, both teams were just about even and Cherokee ended up taking the 77-46 win.

To view or purchase photos from this game, visit: https://onefeather.smugmug.com/SPORTS/BASKETBALL/LADY-BRAVES-BASKETBALL-201516/Vs-Rosman-SMC-semis-February/