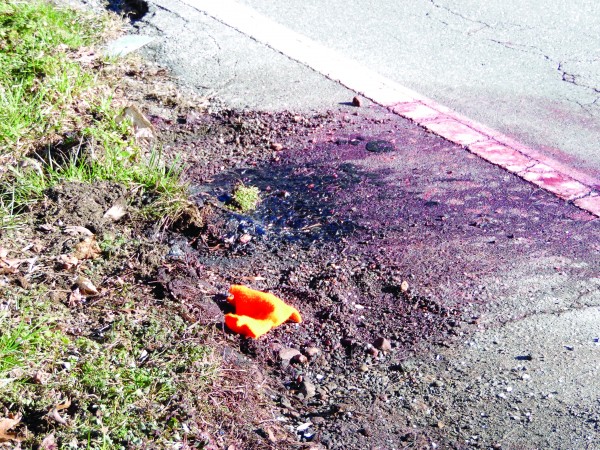 The side of the road is stained with the blood of a bull elk killed in a collision with a Toyota Tundra on US Highway 19 on Tuesday, Feb. 9. (ROBERT JUMPER/One Feather)

Stacey Hornbuckle, an EBCI tribal member, provided a story about an elk that is not your typical wildlife story. On Tuesday, Feb. 9 at approximately 7:45 am, she and another member of her family were returning to Cherokee from Bryson City.

After passing the Ela exit that leads to Whittier, Hornbuckle witnessed a bull elk collide with a Toyota Tundra.  The impact occurred between the Gear Head Inn and Teddy Bear Motel on US Highway 19. The collision critically injured the elk, mangling the hind quarters of the animal. It was pulling itself along the highway and, at some point, tried to move back out into the roadway.

There was no response from local authorities or North Carolina Highway Patrol (this area is outside of the Cherokee Indian Police Department’s jurisdiction).

Hornbuckle remained at the scene, several feet away, continuing to try to slow traffic while the Wildlife officer assessed the situation. She said that, at some point, she heard a total of eight gunshots which she assumed was to dispatch the elk.

She was not sure how the elk was removed from the roadside and did not witness any discussion between the officer and the driver of the Tundra. An official report on this incident and comment was requested from the District 9 contact for the NC Wildlife Resources Commission Division of Law Enforcement, but a response was not available at press time.