BASKETBALL: Braves cruise in first round of SMC tournament 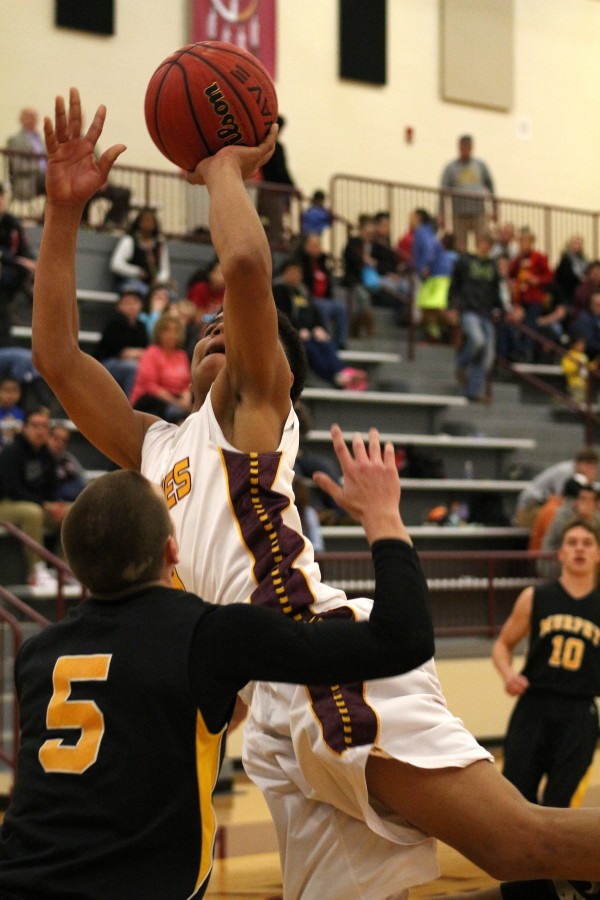 Cherokee’s Justus Day (#3) twists and turns for a shot over Murphy’s Anthony Connors in the first round of the Big Smoky Mountain Conference tournament at the Charles George Memorial Arena on Saturday, Feb. 13. Day had 13 points on the night. (SCOTT MCKIE B.P./One Feather photos) 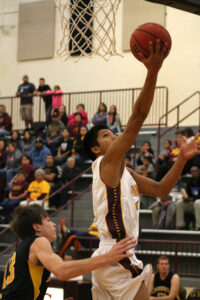 Cherokee’s Jason McMillan (#1) goes for a reverse layup around Murphy’s Jonathan Bowman in the first half of Saturday’s game. McMillan scored 11 points on the night.

With the win, Cherokee advanced to the second round where they are scheduled to face the Rosman Tigers (16-8) on Tuesday, Feb. 16 at the Charles George Memorial Arena.  The Braves defeated Rosman twice in the regular season including a 101-83 victory on the road and the exciting 84-83 squeaker at home.  Coach Tullos commented, “We’re going to have to shoot the ball better if we’re going to beat Rosman.”

Saturday’s game started out slowly for both teams.  Neither team scored in the first few minutes until Tye Mintz, Braves sophomore forward, drove the baseline for a short put-away at the 5:49 mark.  He led Cherokee with 16 points followed by Cory Junaluska 13, Justus Day 13 and Jason McMillan 11.

From there, Cherokee extended their lead to 14-0 holding the Bulldogs scoreless until the 2:44 mark of the first.  The Braves went on to lead 25-8 after the first.

Cherokee dominated the second period outscoring Murphy by 22 points (32-10).  The Braves led 39-10 midway through the second and ended up taking a 57-18 lead into the locker room.

Jason McMillan, Braves senior point guard, hit a three-point shot at the 7:23 mark of the third period to put Cherokee up by 42 (60-18) thereby invoking the NCHSAA mercy rule.  They went on to outscore Murphy 16-6 in the third to take a 73-24 lead into the final period.

Cherokee got a lot of bench play in the fourth period in which they outscored the Bulldogs 19-11 to take the big 92-35 win.

To view or purchase photos from this game, visit: https://onefeather.smugmug.com/SPORTS/BASKETBALL/BRAVES-BASKETBALL-201516