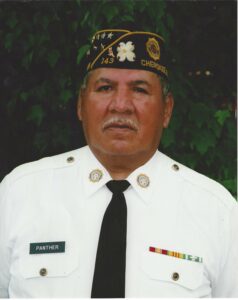 Samuel is the son of the late Emmaline Driver and Samuel Panther Sr. both of the Cherokee Community.

In addition to his parents, he was preceded in death by three sisters, Wilma Pheasant, Anita Ellwood and Frances Welch; and three brothers, Charlie Davis, Tommy Driver and Nicky Driver.

A funeral service is planned for Sunday, Feb. 14 at the Big Cove Recreation Center along Big Cove Rd. starting at 2pm with Rev. Denny Crowe, Rev. James “Bo” Parris and Paster Ben Reed officiating. An immediate burial will follow near the home on Straight Fork.  Pallbearers will be among family and friends.

The family request in lieu of flowers, donations be made to Cherokee Cancer Support at PO Box 2220 Cherokee, NC with Attention Beatrice Smith for the support of Cancer Victims in the Cherokee Community.