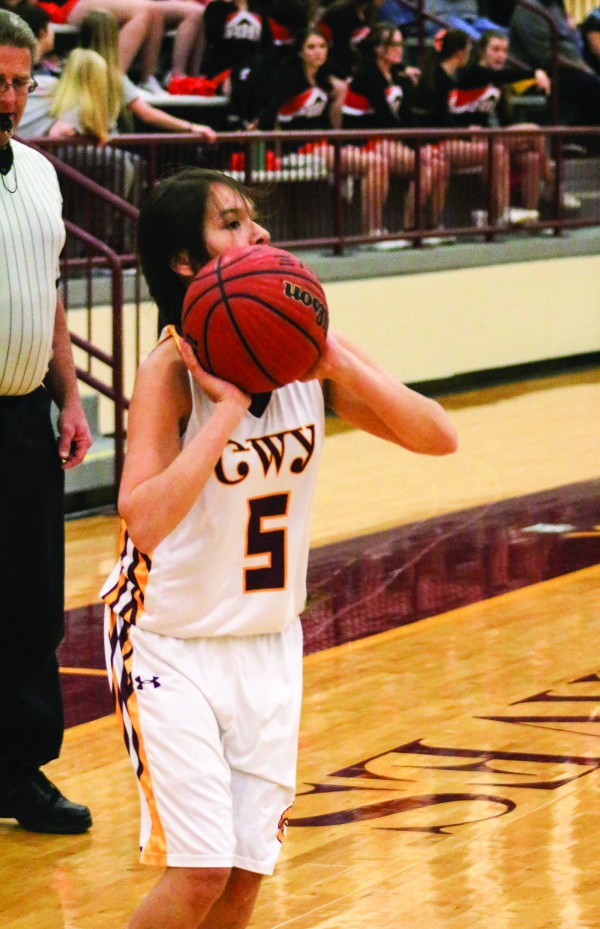 Cherokee’s LeLe Lossiah lines up for a three-point shot in the first half of Friday’s home game against Rosman. She ended the game with 13 points to help the Lady Braves clinch a 73-52 win. (SCOTT MCKIE B.P./One Feather photos)

“That’s one of the things that we set at the beginning of the year was to win the Conference championship first, and it was nice to do that,” said Chris Mintz, Lady Braves head coach, whose team is on a five game winning steak.  “We’ve got one more game (at Swain, Tuesday, Feb. 9) and we go through the Conference undefeated so that’s pretty good.”

“I don’t think it was one of our best performances,” said Chris Mintz.  “We had a couple of spurts that kind of got us a nice lead, but as an overall game, I don’t think we played really well.”

Cherokee scored first and led 6-2 three minutes into the first period.  At the 2:51 mark of the first, they still led by four points (10-6).  From that point, both teams got going and scored a combined 14 points until the end of the period. 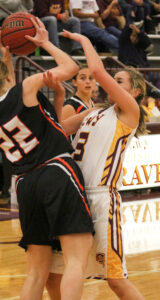 Cherokee’s Tori Teesateskie (#3) fights for the ball with Rosman’s Allie Whitmire (#22). Teesateskie led Cherokee with 21 points on the night.

Tori Teesateskie, Lady Braves freshman guard, hit a three-point shot at the buzzer of the first to give Cherokee an 18-12 lead.  She led Cherokee on the night with 21 points.  In all,  four Lady Braves were in double figures including Teesateskie, LeLe Lossiah 13, Pooh King 16 and Shelby Wolfe 12.

In the second period, the Lady Braves began to extend their lead.  They outscored the Lady Tigers 7-2 in the first two minutes to take a 25-14 lead.  Cherokee would keep an 11-point lead for most of the period and ended up leading by 13 (33-20) at the break.

The Lady Braves came out for the third period on fire and outscored Rosman 10-2 in the first few minutes to take a 43-22 lead.  Midway through the third, Cherokee had extended that lead to 26 points (51-25).

Rosman picked it up in the last three minutes of the third outscoring Cherokee 11-6 and the Lady Braves took a 57-36 lead in the final period.

The Lady Braves put their stamp on the game in the first two minutes of the fourth period by going on a 6-0 run to lead 63-36.  They would go on to take the 73-52 win and the Conference title.

To view or purchase photos from this game, visit: https://onefeather.smugmug.com/SPORTS/BASKETBALL/LADY-BRAVES-BASKETBALL-201516/Vs-Rosman-February-5/