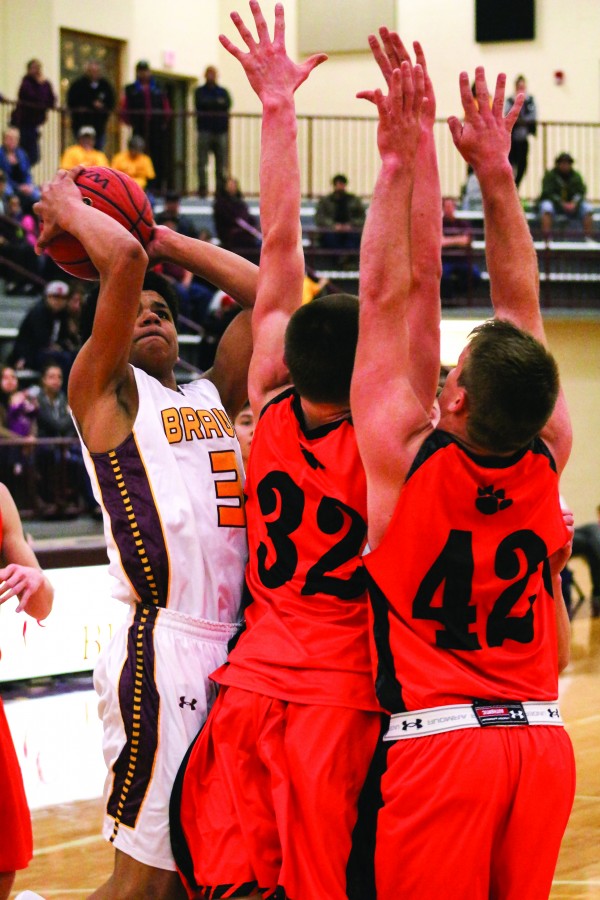 “I was afraid it was going to be this kind of ballgame,” said Willis Tullos, Braves head coach. “They (Rosman) shoot the ball really well, and they did tonight.  They played well, and we came back and played well.”

Coach Tullos made some defensive adjustments in the game, “We picked up our intensity on our man-to-man, and that made it harder for them to shoot the three.  And, if you give them room, they can shoot the three, but we went man-to-man on them, and that was the difference in the ballgame.”

Rosman jumped out early in this game and hit two three-pointers early to take a 6-0 lead just over a minute in.  The Braves had shooting problems early and trailed 23-5 with just over three minutes left in the first.  By the end of the period, Rosman led 29-13.

Cherokee got going a little in the beginning of the second period and cut into Rosman’s lead (36-23) at the 5:35 mark.  After trailing by as much as 20 points in the period, Cherokee was able to cut the Tigers’ lead to 9 (49-40) at the half as McMillan caught a long pass and made a layup with five seconds left before the break.

Rosman got a quick four points in the third period to extend their lead back to 13 points (53-40) in the first 38 seconds of the second half.  Their lead hovered around 10-11 points for most of the third until Logan Teesateskie, Braves senior forward, hit a three-point shot from the top of the key with 1:04 left in the third to cut the Rosman lead to 64-57, the smallest margin since the first two minutes of the game. 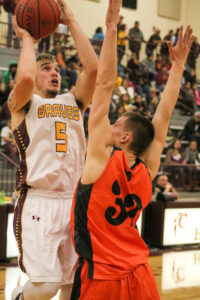 Cherokee’s Tye Mintz (#5) goes up strong against Rosman’s Deland Thomas (#32) in the second half of Friday’s game. Mintz finished the game with 20 points, 2 assists, 9 rebounds and 1 steal.

But, the Tigers exploded for 7 points in the last minute to take a 71-57 lead into the fourth period.

The Braves man-to-man defense really kicked in, and Cherokee began to get some turnovers which translated into points.  Rosman’s lead was whittled back down to 7 points (71-64) at the 5:44 mark.

Then, Cherokee finally took the lead at 80-78 as Holden Straughan, Braves sophomore forward, drove the baseline for two with 1:46 left.  For the night, Straughan had 10 points and 2 assists.

In the last minute of the game, Day and Mintz both hit two free throws and Rosman hit a three-pointer and a couple of free throws to make it 84-83, and the Tigers got a shot off at the buzzer from just off the top of the key, but it missed and Cherokee took the 1-point win.

Rosman was led by Deland Thomas with 28 points followed by Zach Stroup 20 and Tanner Green 16.

To view or purchase photos from this game, visit: https://onefeather.smugmug.com/SPORTS/BASKETBALL/BRAVES-BASKETBALL-201516/Vs-Rosman-February-5/