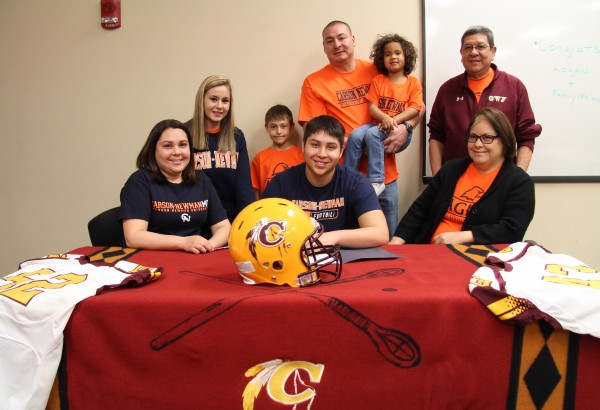 Logan Teesateskie, Braves senior linebacker, signed a letter of intent on Thursday, Feb. 4 to play football at Carson-Newman University this fall.  He will join the Eagles who went 9-3 in the 2015 season.

“It’s a dream come true,” said Teesateskie.  “I’ve been looking forward to this since I played youth league.  I’m just blessed, and I want to thank all of my supporters, family members, and coaches.  The Lord has blessed me enough to have this opportunity.”

Teesateskie was named Honorable Mention All-Smoky Mountain Conference his last three seasons and was the second-leading tackler in western North Carolina his junior year.  Over the last two season, he has averaged 153 tackles a season.

“I’m really excited for Logan because he’s worked so hard for this opportunity, and he’s earned it,” said Kent Briggs, Braves head football coach.  “He’s had a great career and a super senior year.”

Coach Briggs praised Teesateskie’s ability to adapt to any position on defense and offense and said he called on him to play everything from running back to linebacker to down lineman.  “The thing about Logan that I think is really special is that he is a team player…he just did whatever the team needed and that’s a real tribute to him as a football player that he was willing to do that and sacrifice for the team.”

He added, “Now, that he’s going to college, I’m excited because instead of playing five or six positions, he’ll be able to concentrate on one and really get as good as he can be at that position.  I think we’re going to see a really nice college career.”

Teesateskie was surrounded by family and friends at Thursday’s signing.

“I’m very proud of him,” said his father, Tommy Teesateskie, who added that Logan has worked really hard to meet the goal.  “Hopefully, he’ll get to  college and continue to work hard and come back here and give back to the Tribe.”

His mother, Sarah Teesateskie, commented, “This is a dream that he’s wanted to reach since he was a little boy.  He set his mind to it, and he reached it.  We are thankful for all of the support that he’s had throughout the years.  I want to give a special thank you to our immediate family for all of their support, our friends, our community, and most importantly, Cherokee Central Schools for giving him the tools and opportunities to make a dream come true.”

Carson-Newman, located in Jefferson City, Tenn., is a Division II school and plays in the South Atlantic Conference.  “We’re very grateful that a lot of guys have trusted us with their future,” Eagles head coach Ken Sparks said in a statement on National Signing Day, Wednesday, Feb. 3.  “That’s a great blessing to be a part of people’s future.” 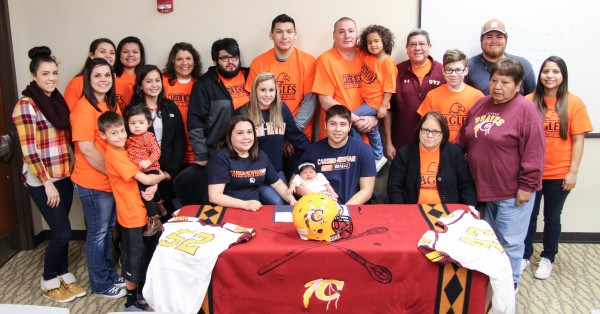 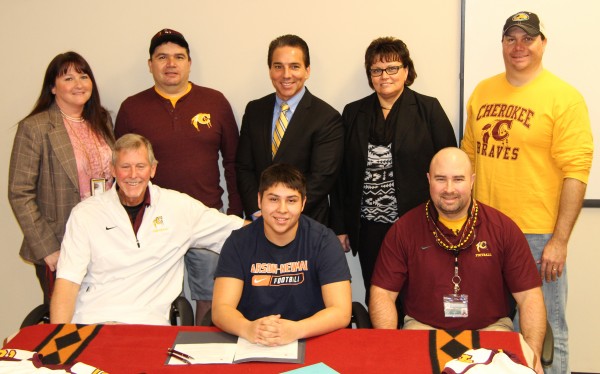