ON THE SIDELINES: It was 20 years ago today… 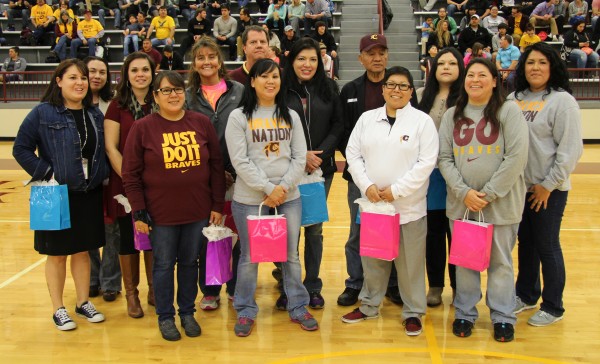 It was twenty years ago today, Coach Pinnix taught the girls to press…(go ahead sing along, you know you want to).  The 1995-96 Cherokee Lady Braves basketball team has the honor of being the only team in school history to win a state championship.  Twenty years later, the team got back together as they were honored at Charles George Memorial Arena on Tuesday, Feb. 2 with the unveiling of a new state championship banner.

The team that beat the Roanoke Lady Redskins, previously undefeated at 27-0, by a score of 69-63 to win the title wasn’t supposed to win anything.

“With the return of only three seniors, the Lady Braves were picked by Smoky Mountain coaches and the media to finish fifth in pre-season polls,” Shawn Crowe, CHS basketball announcer, read during the honoring on Tuesday.  “Ten games into the young season and a 4-6 record was proving the forecaster’s prediction to be correct.”

They were wrong.  Keith Pinnix, then-Lady Braves head coach, made a few adjustments and off they went winning eight in a row and eventually entering the state playoffs at 17-7. 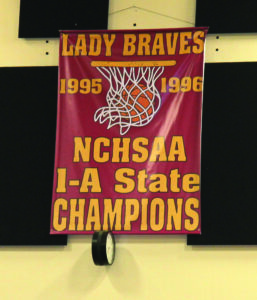 A new state championship banner was unveiled during the honoring on Tuesday.

The playoffs had memorable moments, as most do, from Sis Fourkiller, Regional Tournament MVP, scoring four points in the waning moments of the Regional Final to beat Hayesville and punch their ticket to Chapel Hill to Peaches Squirrell, State Final MVP, knocking down free throws to seal the victory over Roanoke.

The team beat the odds…and, a lot of other teams.

Nowadays, some of these remarkable women still play ball.  Some are mothers, some are college graduates, some work for the tribe, some have moved away.  But, they are all champions.  That underrated team that nobody said could do it not only did it, but they set the standard for which all future Cherokee teams will be judged – on and off the court.

And, their fans believed in them.

We still see some of these ladies at Cherokee games today, and when the game gets close, you can see them get just a little bit antsy as if they were wishing they were out there….which, I’m sure they are.  Congratulations 1995-96 Cherokee Lady Braves on your state championship and on being champions in life.  Keep on balling! 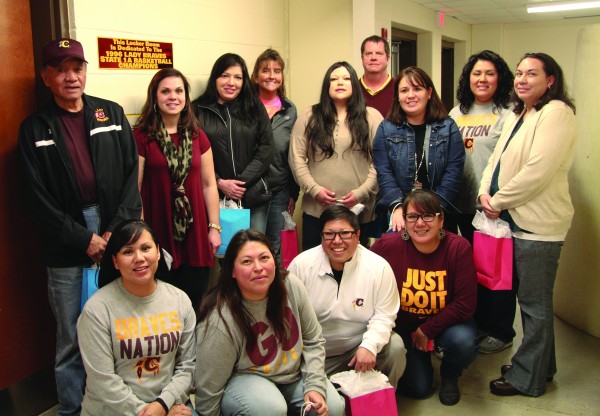 The 1995-96 team poses outside of the Cherokee Lady Braves locker room which has been named in their honor.