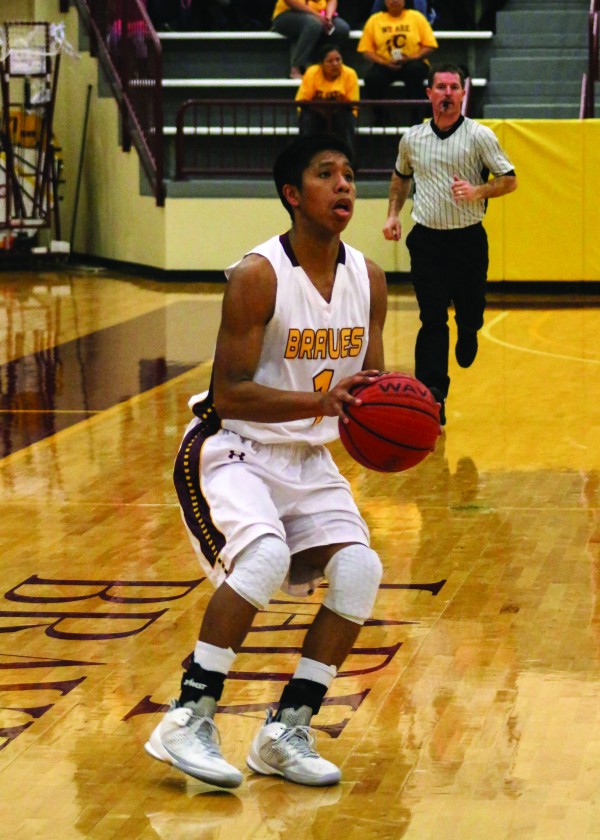 Jason McMillan, Braves senior point guard, pulls up for a three-point shot in the first half of a home game against Robbinsville on Tuesday, Feb. 2. On the night, he led Cherokee with 22 points and 5 steals. (SCOTT MCKIE B.P./One Feather photos)

Mintz led the Braves with 6 rebounds followed by Kennan Panther 5 and Isaiah Evans 3.  McMillan added 5 steals with Day and Panther adding 2 each.

“They played really well,” Willis Tullos, Braves head coach, said following the game.  “They had great intensity, and they did a great job.”

With the regular season winding down and the playoffs looming, Coach Tullos commented, “We’re just trying to play better defense.  Our defense has been a little shaky.  We’re working on those things.” 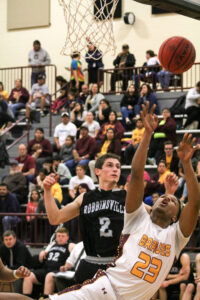 Isaiah Evans (#23), Braves freshman forward, puts up a shot past Robbinsville’s Reece Postell (#2). Evans had 3 points and 3 rebounds in the game.

The game started quickly for the Braves who scored 5 points in the opening seconds starting with a three-point shot by Logan Teesateskie, senior forward, in the first 13 seconds.  They led 5-3 after the first minute, and from there went on an 11-0 run to lead 16-3 at the 4:35 mark of the first.  The next three minutes were relatively even and Cherokee led 25-13 with just under two minutes left in the period.

The Braves went on a frenzy in the last two minutes, and McMillan hit a three-pointer from just left of the top of the key with 1.5 seconds left in the period to give Cherokee a 38-19 lead after one.

The first few minutes of the second were even and Cherokee led 44-22 at the 6:14 mark.  From there, the Braves kept the pressure up and extended their lead to 29 points (59-30) with just under two minutes left before the half.  Day hit a three-pointer at the buzzer to give Cherokee a 30-point lead (66-36) at the break.

Again, the first two minutes of the third period were close with Cherokee edging the Black Knights 9-7 to lead 75-43.  But, Cherokee kept the pressure up and kept plugging.  Day drove inside for an easy two-point shot at the 2:56 mark to give the Braves a 40-point lead (88-48) thereby invoking the NCHSAA mercy rule.

The fourth period was about even with the Braves just outscoring Robbinsville 13-12 to take the big 102-62 win.

To view or purchase photos from this game, visit: https://onefeather.smugmug.com/SPORTS/BASKETBALL/BRAVES-BASKETBALL-201516/Vs-Robbinsville-February-2/