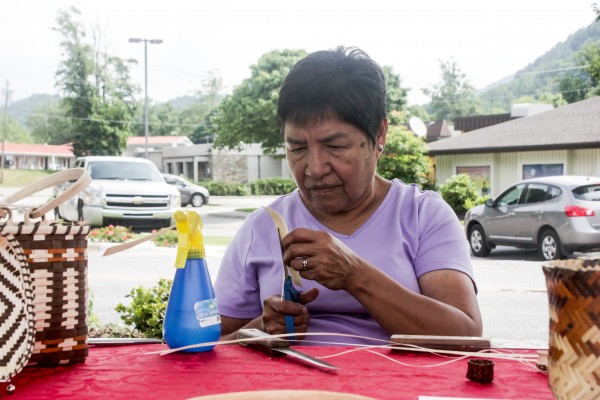 Louise Goings, shown working on a basket at a past Cherokee Voices Festival, has been chosen, along with her husband Butch, as a recipient of the 2016 Jennifer Easton Community Spirit Award. (SCOTT MCKIE B.P./One Feather photos)

“This honor is given to a small number of artists each year to recognize their exceptional passion, wisdom and dedication to passing on ancestral knowledge in their communities,” said Lori Pourier, First Peoples Fund president.

The Goings practice and pass on the knowledge and traditions of their people, including wood carving and white oak basketry. 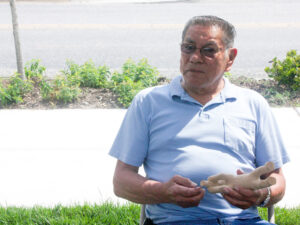 Tonya E. Carroll, EBCI Destination Marketing manager, nominated the Goings for the award. “It is difficult to only mention Butch and Louise for their talent as artists because they do and are so much more.  Butch and Louise have been pillars of our community since I can remember, and probably since before my time.”

“The Community Spirit Awards honor artists not for their individual achievements but for how their work benefits the collective good. These are people who have in many cases spent their lives working with humility and selflessness to sustain the cultural fabric of a community,” said Sherry Salway Black, formerly of the National Congress of American Indians and president of First Peoples Fund’s board of directors.

First Peoples Fund has been honoring culture bearers with the award for 17 years and nearly 100 artists from Maine to Alaska have received it. The award is named for First Peoples Fund’s founder, Jennifer Easton. The honorees will gather for a special celebration gala in Rapid City, SD on Sat., Oct. 8.