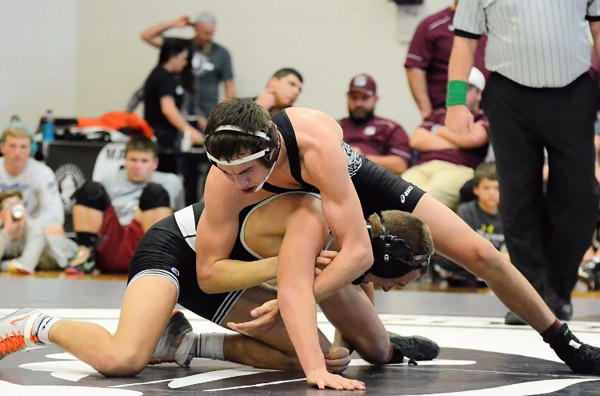 Cherokee’s Anthony Toineeta (top) is shown wrestling Robbinsville’s Brady Lovin in the semifinal match in the 145lb division at the SMC Championships on Saturday, Jan. 30. Toineeta won the match and went on to win the entire division. (Photo courtesy of Sean Brooks)

ROBBINSVILLE – Less than a week after a marque victory and claiming the number-one ranking in the west by Retro Rankings, Cherokee’s Anthony Toineeta squared off against Rosman’s Tanner Whitman in a rematch to determine the top wrestler in the 145lbs division of the Smoky Mountain Conference on Saturday, Jan. 30.

Toineeta earned a first-round bye based on his performance during the season.  He pinned Robbinsville’s Brady Lovin at the 1:33 mark of the first round in the semi-finals.  Then, he emerged victorious after building a 5-1 lead and held off a hard charging Whitman in the final seconds of the Smoky Mountain Conference championships.  Afterwards, he was named the Most Outstanding Wrestler in the SMC Tournament.

Cherokee’s Jonah Burnhisel, from the 113lbs division, took second place.  After a first-round bye, he pinned Rosman’s Shaylan Fisher with 20 seconds left in the semi-final round.  He would face eventual SMC tournament winner Arlus Orr from Robbinsville in the finals.

Lloyd Mitchell, also representing Cherokee, took second place in the 182lbs division after defeating Robbinsville’s Freddy Romero in the semi-finals by a 9-5 decision.  He would finish as a runner-up to Swain’s Caleb Woodard.