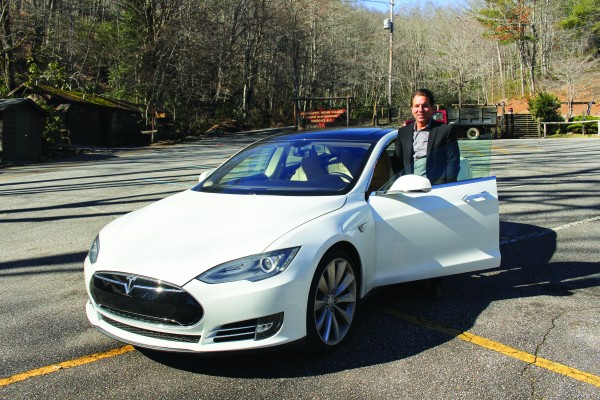 When Vice Chief Rich Sneed was offered the opportunity to select a “new” vehicle, he considered three of his passions- technology, ecology and economy. He is an automotive hobbyist and has spent a considerable amount of his life working on vehicles and teaching others to work on them. He is also a nature lover concerned about the upswing in air, water and land pollution. Now, as a tribal government leader, he also is looking for opportunities to effect savings to benefit the Cherokee community.

So, early in the selection process, he focused on Tesla vehicles. Tesla is an American automotive and energy storage company. The acronym “EV” is used for electric vehicles. In addition to making EV’s, Tesla Motors, Inc. is on the cutting edge of lithium battery research/development, and creation of innovative ways to produce useable energy that is eco-friendly and economically advantageous. Teslsa incorporated in America in 2003. Tesla also makes automotive lithium battery packs for Toyota hybrids.

With his father’s advice to “never buy a new vehicle” in the back of his mind, Vice Chief Sneed set out to locate a used Tesla, and found a 2013 Model S $63,000-lower than many typical governmental use SUVs that may range as high as $80,000. In fact, the economic benefits are very impressive for the owner and, in this case, the tribe.

A total of $6,500 is allocated in the Vice Chief’s budget for expenses related to the operation and upkeep of the office’s vehicle. When the Vice Chief is not on travel, he has plenty of “energy” to get around to his various duties on a single charge. The range on the fully-charged Tesla is approximately 270 miles. At the end of the day, he parks it at home, plugs it into a 240V outlet that he and his son installed and by the next morning, the vehicle is charged and ready for another day of activities. Since the car uses the energy of deceleration (Kinetic Recapture Technology) to recharge the batteries, use of the brakes is minimized. With no gas powered engine, there is no oil to change, belts or brake pads to replace.

Vice Chief Sneed stated that the tires would be the only thing that might wear enough to replace. Since the operating cost of the vehicle is minimal, he said that the majority of that maintenance allocation can be put to work for the tribe in programs.

In a recent email from the EBCI Purchasing Department, the calculated comparative cost of a Cadillac Escalade to the Model S used in a similar fashion as would be in service to the Vice Chief’s office is as follows: the Escalade initial cost is $75,600; fuel cost estimated over four years equals $20,000; maintenance and repair cost-$3000-for a total of $97,600. The Tesla Model S initial cost is $63,000; incurs no fuel cost and, maintenance is $2,800 for a total of $65,800. The Department estimates that “savings could be more than $30,000 over the four year period in addition to a low environmental impact”.

Of course, terrain and weather can have a sizeable impact on mileage for both electric and gas powered vehicles. Mountain driving won’t produce 100 MPG equivalents, but the Tesla will still outperform its gas counterparts concerning mileage.

Tesla Motors were the first to invent a battery that would have a life over the 200 mile limit. In addition to that economy, the Model S is a performance marvel. Driver controls are high tech, with a console at the center of the dashboard that looks and acts like a giant IPad. All of the functions except steering, accelerating and braking may be controlled from that center. Acceleration in the vehicle is impressive and without the typical hesitation of a gasoline or diesel powered car, allowing the Model S to move from standing to 60 mph in just 5.2 seconds. That is not bad for a sedan.

Vice Chief Sneed expressed that the biggest factor or selling point for him, other than the economy and cost savings to the tribe, was the obvious and significant ecologic advantages. The electric car will produce no fluorocarbons. As more of our buildings are retrofitted with alternative sources of energy, like wind and solar, which will provide fuel for electric cars, the impact on environment will continue to decrease. He envisions a future that includes our tribal fleet shifting to less environmentally damaging transportation.

In discussion with Tesla concerning the purchase, the company has agreed to install three new charging stations on the Qualla Boundary. This will enable more electric and hybrid car users, local and tourist, to “fill up” while in Cherokee.