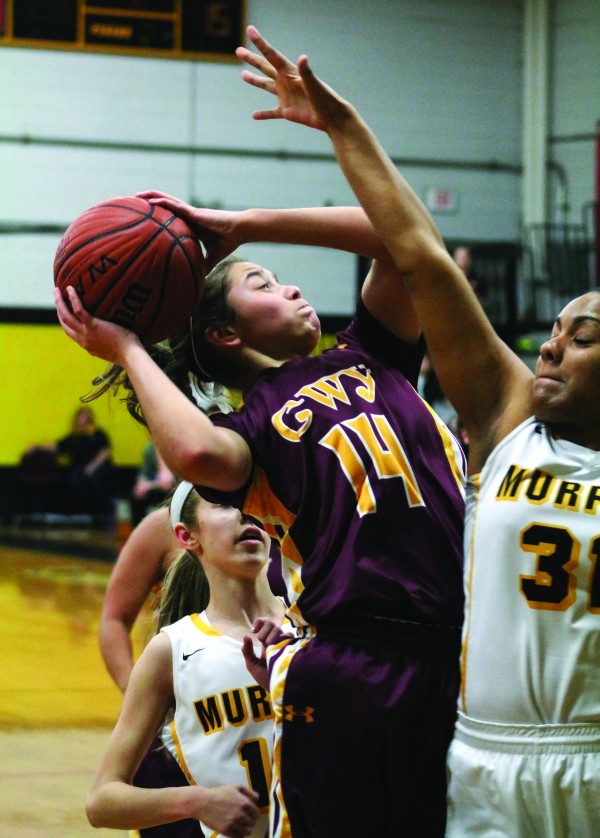 Cherokee’s Shelby Wolfe (#14) goes for a shot around Murphy’s Kiara Dalrymple during a game at Murphy on Friday, Jan. 29. Wolfe finished the game with 10 points. (SCOTT MCKIE B.P./One Feather photos)

MURPHY – The Cherokee Lady Braves stayed perfect (9-0) in Big Smoky Mountain Conference play with a 25-point (80-55) win at Murphy on Friday, Jan. 29.  Pooh King, junior point guard, led Cherokee with 29 points with 25 of those coming in the first half.

“They’re (Murphy) so big and their center is so good and is such as hard person to keep off the boards, we just concentrated on trying to stop the offensive rebounds.  They were killing us early with it.  We did a little bit better job, but still not as good as we wanted to.” 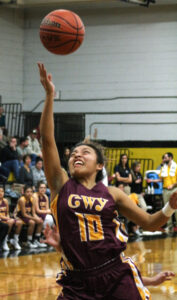 Pooh King, Lady Braves junior point guard, goes inside for a shot. She led Cherokee with 29 points including 25 in the first half.

Murphy scored first and led briefly in the first few minutes – their only lead of the game.  Cherokee got going and took the lead (7-4) at the 5:37 mark and never relinquished it again.  They ended up leading 23-12 at the end of the first.

The third period was also relatively close with Cherokee keeping a 20-point lead for most of the eight minutes.  The Lady Braves led 67-49 at the end of the third.

Cherokee outscored Murphy 13-6 in the final period to seal the 80-55 victory.

To view or purchase photos from this game, visit: https://onefeather.smugmug.com/SPORTS/BASKETBALL/LADY-BRAVES-BASKETBALL-201516/At-Murphy-January-29/