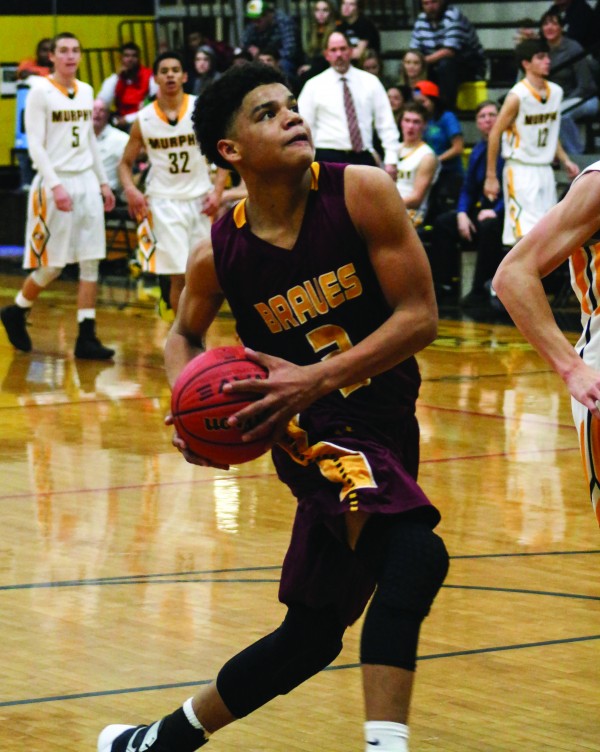 Justus Day, Braves sophomore forward, prepares for a layup in the first half of Friday’s game at Murphy. He led Cherokee with 26 points, 2 assists, 1 rebound and 3 steals. (SCOTT MCKIE B.P./One Feather photos)

MURPHY – The Cherokee Braves (16-3) remained atop the Big Smoky Mountain Conference with a big 90-41 win at Murphy (1-15) on Friday, Jan. 29.  The Bulldogs, winless (0-9) in conference play, couldn’t keep up with Cherokee’s high-powered offense which saw four Braves in double digits.

“Coming off that big, emotional win we had on Tuesday (vs. Hayesvile), I think we did pretty good,” said Willis Tullos, Braves head coach.  “It’s hard to win a big game like we did on Tuesday against Hayesville and come and have the same intensity and the same focus, but I thought they (Braves) came back in the second half, got focused and played well.  I was pleased with their effort.”

The Braves jumped out to an early 5-0 lead in the first minute of the game.  Neither team shot particularly well in the opening period, and both missed shots inside and outside.  The Braves led 15-9 at the 3:39 mark and went on to lead 21-13 at the end of the first. 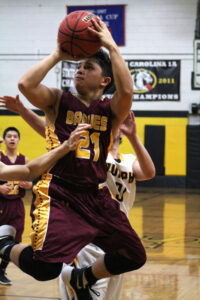 Cherokee got a lot of play from their bench in the second half. Here, Dezman Crowe goes hard inside for a shot. He finished the game with 3 points and 2 rebounds.

Cherokee came out for the third period on fire and scored seven points in the first 43 seconds to lead 51-23.  The Braves outscored Murphy 37-18 in the third.  With 1:57 left in the period, Straughan was fouled while taking a three-point shot.  He made all three foul shots to give Cherokee a 78-37 lead thereby invoking the NCHSAA mercy rule, and the clock ran for the remainder of the game.  The Braves led by 40 points (81-41) at the end of the third.

The Braves were able to get a lot of bench play in the third and fourth periods, and they held Murphy scoreless in the fourth period as Cherokee won 90-41.

The Bulldogs were led by Hagan Newton with 12 points followed by Anthony Connors 7 and Hayden Hughes 6.

To view or purchase photos from this game, visit: https://onefeather.smugmug.com/SPORTS/BASKETBALL/BRAVES-BASKETBALL-201516/At-Murphy-January-29/