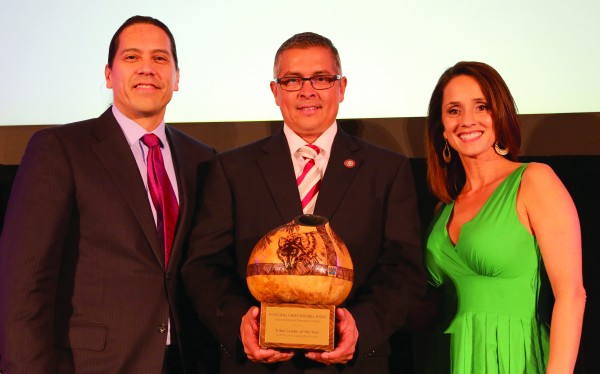 The 2015 Tribal Leader of the Year award was presented to Principal Chief Michell Hicks.  He is one of the only elected tribal leaders with a finance background.  As a certified public accountant, Chief Hicks spent the early part of his career in the Tribe’s Finance Department as chief financial officer.

Information from the NAFOA stated, “Over the past 12 years, the Eastern Band of Cherokee Indians has seen remarkable economic development and unprecedented level of services for tribal members, including full funding for higher education, a thriving housing program, and the overhaul and expansion of the Tribe’s social services programs.  Chief Hicks has overseen many developments at the Tribe, including the expansion of Harrah’s Cherokee Casino & Resort, the development of the Sequoyah National Golf Course, and the construction of the Cherokee Tribal Justice Center, Cherokee Indian Hospital, and the new River Valley Casino.  Since taking office, the net position of the Tribe has increased $366 million for a total of $786 million.  Additionally, the employee base of the Eastern Band has grown from approximately 2,500 in 2003 to a projected 5,500 at the completion of the new River Valley Casino.”

The First Nations Oweesta Corporation received the 2015 Education Program of the Year award for the success of their Building Native Communities (BNC) initiative which utilizes a train-the-trainer model to assist Native organizations with establishing and sustaining financial education programs in their communities.

NAFOA’s 2015 Deal of the Year award was given to the Snoqualmie Indian Tribe for a refinance that provided the Snoqualmie $10 million in interest savings in the first year and gave them flexibility to pursue future economic opportunities.

Joseph Nayquonade Jr., Commissioner of Corporate Affairs and chief executive officer of Mille Lacs Corporate Ventures (MLCV) was awarded the 2015 Executive of the Year Award for his outstanding work on behalf of the Mille Lacs Band of Ojibwe.  He oversees existing businesses and analyzes new business opportunities for the band.

NAFOA will hold its Fall Conference at the Westin Copley in Boston, Mass. on Sept. 14-15.