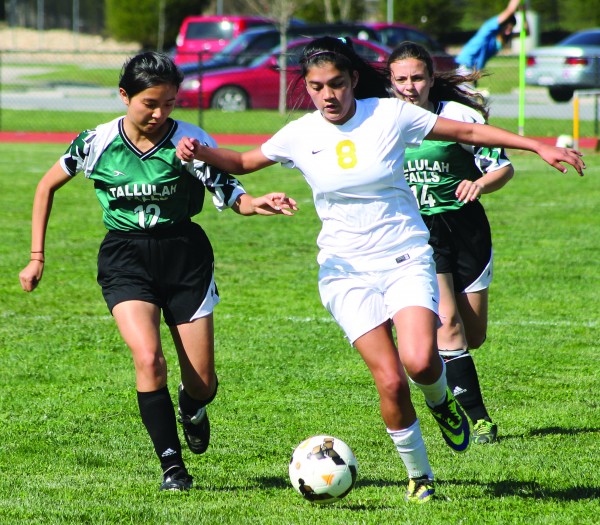 The Tallulah Falls Lady Indians got one goal against the Lady Braves on Tuesday, April 21, but it proved to be enough as they took a 1-0 victory over Cherokee.

After the match, Gary Ledford, Lady Braves head coach, was very happy with his team.  “That was unbelievable.  We were on the short end of a 1-0 score, but I cannot ask any more of these players.  They played with unbelievable heart and unbelievable passion.  That’s the kind of stuff that just makes a coach’s heart beam.”

Sidnie Yanez, Lady Braves forward, had several nice runs in the half, but the Lady Indians defense tightened up once a Cherokee player got in the box.

The only score of the half, and the game for that matter, came late in the half as Tallulah Falls’ Madeleine Tauber, a senior from Germany, scored with a shot from the right side about 10 yards from the goal.  The ball soared right to left and ended up on the left corner of the net.

The second half remained even for both teams.  Cherokee did get more shots off in this half  with four (three on goal) to Tallulah’s three shots (two on goal).  Yanez came very close with a strong shot from about 25 yards out that went just wide right.

The Lady Braves pushed the ball up the field more in the second half and had some opportunities, but they just couldn’t quite get by the Lady Indians defense.

To view or purchase photos from this match, visit: https://onefeather.smugmug.com/SPORTS/SOCCER/Vs-Tallulah-Falls-April-21/i-tkMLBBP