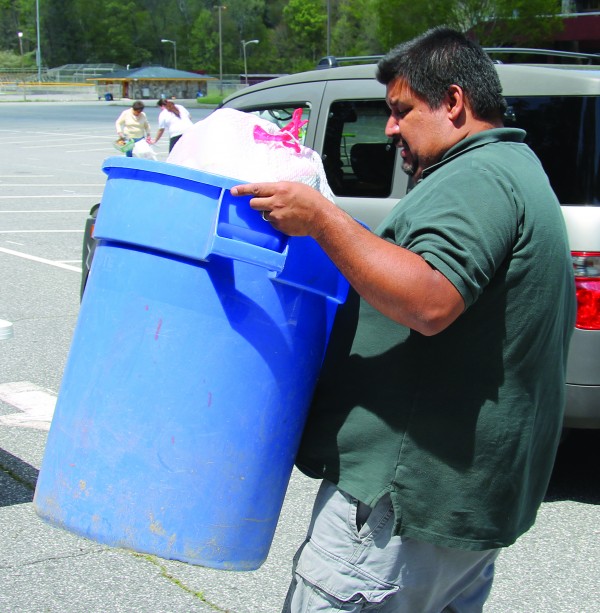 According to information from the U.S. Bureau of Land Management, it takes from 400-500 years for a plastic soda bottle to decompose.  Earth Day was created to help solve that problem.

Earth Day was first celebrated in 1970 and is celebrated each year on April 22.  This year’s observance was marked in Cherokee with an event at the Acquoni Expo Center, called Gadugi Earth Day, which partnered the Junaluska Leadership Council and the Cherokee Youth Council with the Tribal Recycling Program.

“We’re trying to pull the kids together to help give back to the community,” said Sky Kanott, Cherokee Youth Council manager who added that the Youth Council helped spearhead the recycling movement in Cherokee about seven years ago.  “This is Tammy Jackson’s vision; she came up with the idea.  She goes on the Costa Rica Eco-Study Tour, and she wanted to get her kids involved in something here so we pulled together and decided to hold a recycling event.”

Participants at Wednesday’s event had the opportunity to bring in their recycling as well as learn about other ways they can help reduce their waste including composting.  Prizes were given to the ones who brought in the most recycled goods such as paper, cardboard, aluminum, and glass.

“We’re hoping it’s an annual event,” said Tammy Jackson, EBCI Cooperative Extension program, who helped planned the event.  “This year’s participation has been pretty good, and we’re hoping that more programs will join us next year and it can be bigger.” 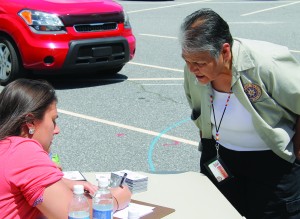 Mary Long, of the Wolfetown Community, brought in multiple bags of recycled goods that her family has collected.  “We just think it’s good for the Earth,” she said.  “We’ve been recycling for awhile now.”

T. Trejo, Tribal Recycling Program manager, related, “This helps us get the information out there as to what services we offer here on the reservation, and it gives people an opportunity, that aren’t able to do it on a regular basis, to get out and bring their stuff in. The shredding truck is really a big opportunity because we don’t have that service here on the reservation.  So, once a year, if people want to, they can save up their papers and get them shredded.”

Rabekka Wolfe, a Cherokee Youth Council member, helped to man a booth at the event informing the public about recycling on the reservation.  Her family is active in recycling, “We recycle our water bottles and our cans.  I think this will keep the community cleaner and greener.”

Tribal Recycling operates several recycling trailers around the reservation as such: