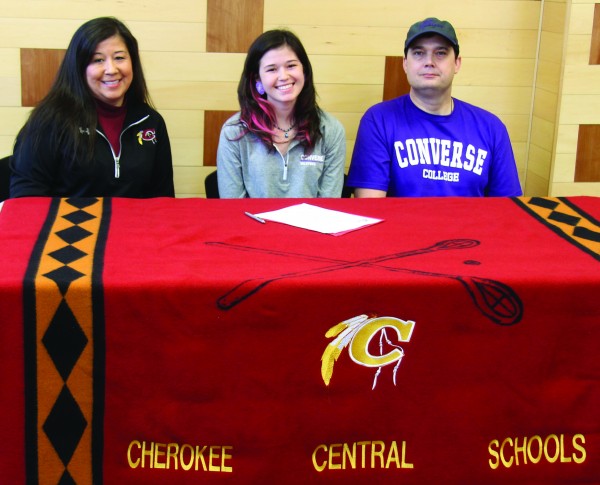 Reagan Barnard, Lady Braves senior forward, will be a Valkyrie next season.  She signed a letter of intent on Monday, April 20 to play basketball at Converse College in Spartanburg, SC.

Barnard, who has played basketball for 10 years, played only one season with Cherokee.  But, it was a good one as she was named Honorable Mention on the Smoky Mountain All-Conference list, played in the recent Blue-White All-Star game, and was named to the 1A West Regional All-Tournament team. 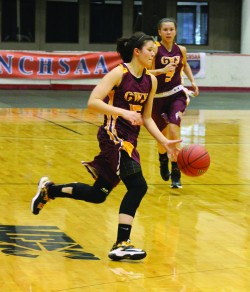 Barnard brings the ball up court during the 1A West Regional Final in Winston-Salem in March.

Prior to coming to Cherokee, Barnard played the past three seasons for the Cleveland High School Storm in Rio Rancho, NM.

Chris Mintz, Lady Braves head coach, related he was very happy to see the third player from this year’s team sign to play basketball at the college level.  “It’s incredible.  It’s a testament to the girls that they’re able to have the grades and be able to have the ability.  They’ve worked hard, and some of their dreams are coming true.”

Reagan’s mother, Roberta Barnard, said, “It’s exciting.  She’s worked really hard for this, and we’re thrilled.  She set goals when she was younger…we’re very excited for her.” 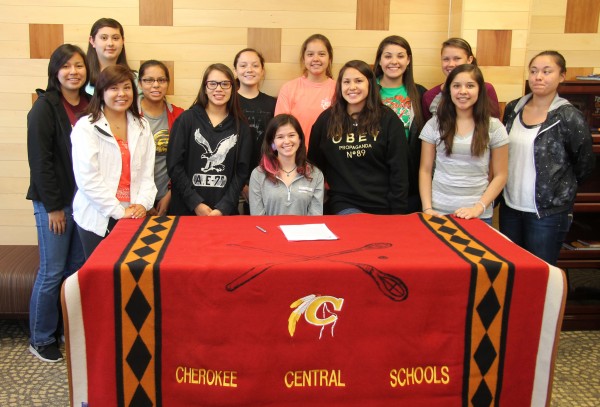 Barnard (seated center) is shown with her teammates.