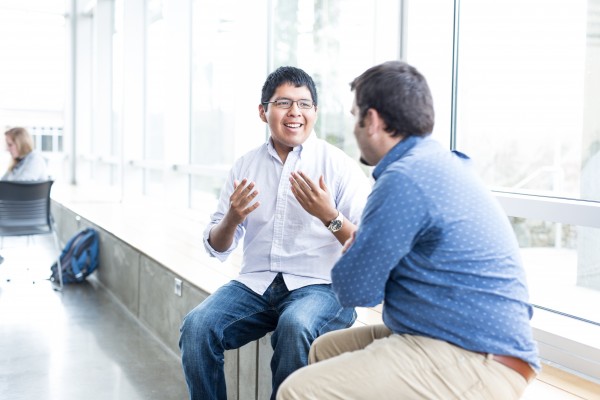 Although Devyn Smith grew up less than an hour from UNC Asheville, he didn’t know a single person on campus when he arrived as a freshman.

“When I first got here nobody from my high school, nobody from my town, nobody I even remotely, kind of, sort of knew was here,” the sophomore said. “So it was a big culture shock for me.”

Smith, an EBCI tribal member, grew up on the Qualla Boundary.  “We are the smallest minority on campus,” Smith explained. “We don’t have as large a number as even other minority groups have, which comes with the nature of being a Native American.”

Smith was instrumental in the re-creation of the Native American Student Association (NASA) on campus, where he currently serves as president. The student group plays an important role for Native American students who, like Smith, might find themselves feeling alone when they first arrive on campus.

“It gives students a safe community to belong to,” said Trey Adcock, assistant professor of education and director of American Indian outreach, who serves as faculty advisor for the student organization. “It’s important for all students, but I think it’s particularly important for American Indian students. For many it’s their first time away from home and their own communities.”

“I know it was a lot tougher on me that first semester,” Smith said. “So I hope through the Native American Student Association we can help alleviate some of that burden that many Native students feel.”

The Native American Student Association, which was more or less inactive when Smith was a freshman, now boasts 10 members, and includes Cherokee, Mohawk, Lumbee, Anishinaabe and ally students.

“I can’t speak highly enough of Devyn and the job that he has done to help build the community on campus with the other students,” Adcock said. “They eat together, they’ve become friends, and now they’re moving into more critical areas. They’re having a student panel on identity issues; they’re participating in the Queer Studies Conference; they’re hosting a critical movie night.

“I think all of those avenues are important to deepen the discussion for us on campus about what does it mean to be a contemporary Native American person, a tribal citizen.”

Last semester NASA co-sponsored several events in the Native American Speaker and Performance series, which will continue in the fall. Events such as an electric pow wow performance by A Tribe Called Red and a Cherokee stickball demonstration attracted audiences from on and off campus to learn about and engage with Native American culture. Next semester the Interdisciplinary Studies Program will offer a Native American readings course.

“There are great possibilities for this campus and what it can become, not just for Cherokee students, but all Native students,” Adcock said. “The Native student group is awesome, and it’s also part of a larger story that’s happening on this campus.”